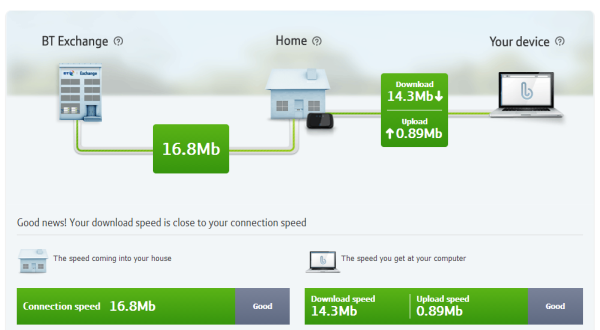 It has taken me a couple of weeks to write this post. I didn’t want to be overly hasty; I didn’t want to make claims that I couldn’t substantiate. But our broadband connection, which has been a bit flaky since early December, and downright annoying since late January has finally been fixed, after five visits from BT Openreach engineers (one in December, two in February, two in March).

The story so far…

During that time we had the following work done:

None of this fixed the issue of our broadband connection dropping randomly throughout the day; at most over 100 times a day.

When the fifth BT Openreach engineer rolled up my spirits lifted a little. This chap—Andy Smith, I think his name is—had visited us about a year ago to resolve a similar issue and he had gone beyond the call of duty to fix our connection by disconnecting all the unused extensions around the house which resulted in a 2Mb increase in download speed.

Like any good physician, he listened to my tale of woe before getting to work checking connections, running line speeds, investigating the BT box in the street. But he returned looking quite glum, reporting that all the tests returned fine: there is definitely not a line fault BUT he could see from his results that there was a problem, he just couldn’t put his finger on it. There was nothing else he could do.

I ran upstairs to fetch a piece of paper that I wanted him to see. It was a print out of the error log the last time it went down. I had noticed that preceding each drop out the error log reported “PPP LCP Send Termination Request [User request]”.

He read the error log and stroked his chin (metaphorically if not literally). “Hmmm…. PPP? Point-to-point protocol. That’s to do with connection not sync speed.”

Then he looked up at me. “That’s all a bit beyond me, to be honest. I don’t understand what it all means…”

“… but I do know someone who does!” He got out his mobile phone, called a colleague, and then spoke gobbledegook for ten minutes before calling me down the stairs again.

The plan was to “move [me] to new broadband equipment at the exchange”. The engineer at the other end of the phone had already done it from his end, but Andy needed to drive to the exchange and physically swap our network cable from one piece of kit to another. It would take about 10 minutes.

And that was it. Fixed! We had a steady, solid, fast connection for over 7 days before it performed another reboot, but it looks like this was just to re-sync the speed; it did it again this afternoon.

A few weeks ago, in the midst of our most frustrating experience of BT broadband I wrote a very disappointed blog post. I’m sorry I felt that I had to write that post, because as I had said before and as I have waxed lyrical to many people over the years on the whole I’ve found @BTCare to be a world-class customer service experience.

It did the job, however. Twenty minutes after posting that mild diatribe, I took a call from Niall at BTCare. “How are you today?” he asked.

Niall was very apologetic about not getting in touch when he said he would. He never missed another call again. He called each time he said he would, and he faithfully kept up to date with the progress of my support incident.

In short, Niall actually did restore my confidence in BTCare—it just goes to show the difference that one person can make on behalf of the company they represent in changing attitudes. By the end of it I certainly felt that Niall from BT cared, and Andy Smith from BT Openreach cared, even if BT itself was still maybe a little ambivalent about me, so long as I kept paying my monthly bills.

Which reminds me, they offered me a refund on my broadband connection back to the date in January that this portion of the incident was first reported.

A very enthusiastic and heartfelt thank you to Niall at BTCare, and Andy Smith (?) at BT Openreach.