Question: which of these boxes is the large?

A couple of nights ago, while our good friend Richard was over visiting from Glasgow we ordered pizza from Pizza Hut.

We checked out the various leaflets that had been delivered through our door, to find that typically they were all out of the date. So I checked their website. But … why can’t you download their menu in PDF format?!

Even worse is their Disability Facilities ‘page’, which you’ll find as a link in the top left of the main page. Click it and you’ll be presented with a tiny pop-up window with the smallest text on the whole site! With centred text, which is difficult for users with certain disabilities to read, and the Disability statement can only be downloaded in PDF format!

Web-related rant over. Let’s get to the Real World™ rant.

In the end, finding the Website too annoying to use practically, Jane ended up telephoning our local Pizza Hut (on St John’s Road) and finding out what deals they had on offer that evening. We opted for a two large pizzas deal. Jane ordered and about 45 minutes later it was delivered to our door.

Now, bear in mind that over the last few weeks I’ve done quite a bit of reading about good design and bad design, in books such as Don’t Make Me Think by Steve Krugg, and The Design of Everyday Things by Donald A. Norman.

When the pizzas arrived we got them into the house and discovered that one looked remarkably larger than the other: 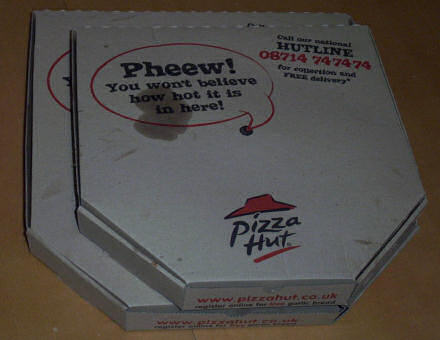 Answer: they both are!

The last time we’d ordered from Pizza Hut it took three trips back to the shop for them to get our order correct.

“We ordered two LARGE pizzas! They’ve sent a large and a medium.”

Jane got back on the telephone to them, only to learn that they hadn’t messed up the order. Those were both large pizzas, only one had a Deep Pan base (the smaller box) and the other had an Italian base (the larger box).

It may be obvious to those working at Pizza Hut that those were both large pizzas (just different bases) but it didn’t help us once they’d been delivered. Surely they could print something end-user-friendly on the boxes that tells the customer what size/base this box is likely to contain, in a similar way that McDonald’s and Burger King can indicate on their packaging whether a drink is Diet or not, or a burger is made without particular fillings. It wouldn’t take very much to do, and I can’t imagine that we were the first customers to phone back querying if we’d received the right order.

As it turned out they did get our order wrong: they gave us the wrong Ben & Jerry’s ice cream.