As we approach the final few weeks of the school year, last week I received an email from Tamba, the twins and multiple births association, of which we are members, about a resource to help parents decide whether to keep their twins or multiples together in the same class or not.

We decided to separate our twin boys, and it turns out to have been the right decision. Each has bloomed where he has been planted, each has found his own confidence. While it’s not always been the easiest of paths for either of them, or us (and we’ve often found ourselves wondering if we made the right decision) I am so proud of both of them in how they have grown and matured during this academic year.

The Tamba resource is a short document, produced with Tamba’s support by the Hackney Learning Trust, that outlines the issues to consider. If you have twins or multiples who are heading to school soon then it’s certainly worth a read.

Download the Together or apart guidelines and checklist from Tamba.

Photos from our visit to the hospital this afternoon to see Jane and Isaac. Both Reuben and Joshua were very excited to see Isaac today. 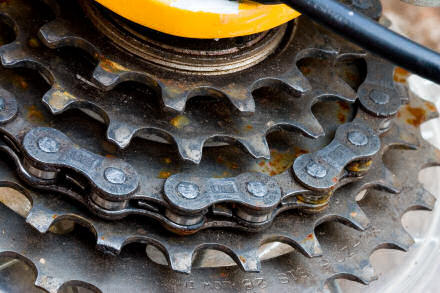 Bicycle Gear by donjolley at Stock.xchng.

Bedtimes with Joshua have been a little tricky of late. ‘Fraught’ might be a word that you could use about them. It’s certainly a word that I have used about them.

At his lunchtime snooze he’s amazing. You put him in his pushchair in the garden and off he drifts to sleep quite effortlessly, waking refreshed 90-120 minutes later.

In the evening, however, after his bath he screams. And eventually so do I.

But not this evening. This evening I was determined to not get upset.

I read an article in the TAMBA magazine a while back that one secret about putting children to bed is to not have an agenda afterwards.  Don’t approach bedtime thinking “Right, once they are asleep I’ll have time to do x, y and z.”  they advised. But that’s tricky, because after their bedtime is usually the perfect time to get x, y and z done.

This evening, though, I actually didn’t have an agenda other than to embody a zen-like calm while dealing with Joshua on our bed.  And that’s exactly what I did.

What I got back from him, however, was this.

I looked at him.

Joshua nodded an pointed out the window towards the shed.

“We can’t look at the bike this evening,” I reasoned. “It’s sleepy time!”

I am not kidding for 15-20 minutes he kept this up. At one point I thought I was in some kind of trance.

“Wheesht! with the bike nonsense!” I demanded.

At one point he stopped suddenly. His face was a quizzical picture, like he was trying to figure out how he could better convey to me the seriousness of what he was telling me.  And then, there it was, a tiny Eureka moment:  “Bike! … Bike! … BIKE!! Daddy’s bike!”

I promised that I’d show him my bike tomorrow before handing him off to Jane who put him back in his cot.

“Mummy?” he said as he lay in his cot in the glow of the night-light.

So I couldn’t let today go by without wishing Reuben and Joshua a very happy 1½th birthday! That’s right they are 18 months old today. I can hardly believe it: we’ve survived them and they’ve survived us.

A year and a half

The last year and a half has been such an emotional and physical roller coaster; an incredible learning curve for us all. Not just in terms of the practicalities of how to look after two babies (now toddlers) but also learning about ourselves under pressure, and Jane and I learning more about each other.

It’s not been easy. At times it’s been really, really difficult. But it has been an amazing journey, an amazing adventure. I wouldn’t give it up for anything. In the past I’ve worked in homeless hostels, in a prison and as a hospital chaplain. Those jobs now look easy in comparison!

And we have the loveliest, sweetest boys who wave “bu-bye!” to their feet when they are zipped into their sleeping bags at night, or who tilt their heads to the side when coming in for a cuddle before racing off after the cat (pronounced ‘soos’) or to carry a mop around the house. (Cuddles from Reuben and Joshua I’ve realised are amongst the two greatest things on the planet.)

Jane had them weighed and measured last week. Joshua’s doing really well with a pretty bang-on average weight and height for his age. Reuben, however, is currently at the 95th percentile for weight and off the chart for height. It turns out he’s the average height of a 2½ year old!

So, Reuben and Joshua just know that Daddy loves you and is more proud of you than anything else I’ve ever experienced. I love you.