As I have said elsewhere, I love my Pure Marshall Evoke-1XT DAB radio. However, over the last couple of years my experience with it hasn’t been great due to poor radio signal in my house.

With the radio sited next to my bed, every time I moved into a particular spot the signal would drop and the sound cut out. Moving it to the bedside table on the other side of my bed improved things but it’s literally on the other side of the room (I have a big bed and a small room) and I would need to step across the bed to reach it.

If only there was a way to afix an external aerial…

END_OF_DOCUMENT_TOKEN_TO_BE_REPLACED 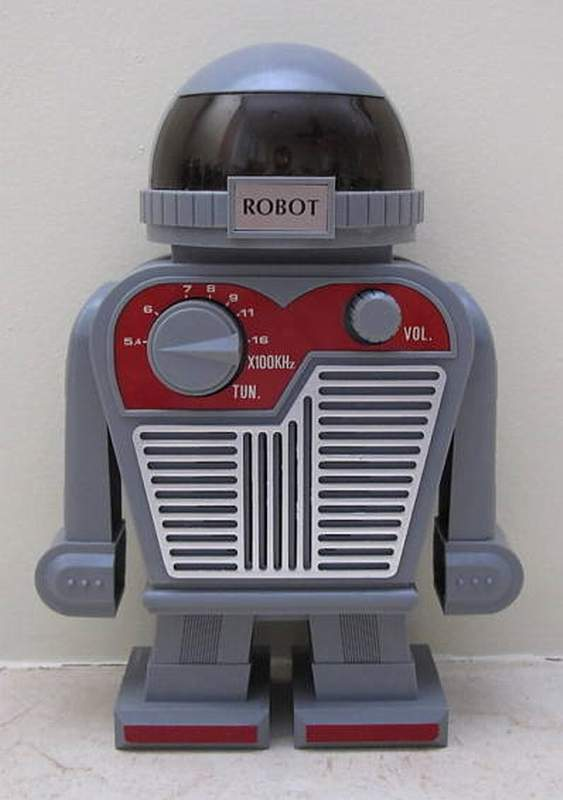 I used to have a bright yellow one of these AM radios which I found on The Old Robots.

His (or her, I never thought to ask) eyes lit up when people spoke or music played, as I listened to Radio Luxembourg beneath my bed sheets late into the night.

And thus began my love of radio. Now sometimes my eyes light up when people speak or music is played.

I wake up most mornings to Planet Rock radio on my beloved Pure Evoke-1XT Marshall DAB radio. But that’s in my bedroom, I don’t currently have a DAB radio in my study and Screamer Radio no longer works for Planet Rock.

Which got me thinking: could I somehow convince my digital music player of choice, MusicBee, to stream Planet Rock? It seems to handle pretty much everything else I throw at it.

The answer is yes; this is how in three easy steps.

The first thing to find is the URL to stream Planet Rock. This one currently works for me:

2. Play the stream in MusicBee

Next, we need to tell MusicBee to use that stream.

That’s as simple as opening the menu and selecting:

This may take a few seconds while MusicBee connects to the streaming audio feed and then BINGO! you’ll suddenly be listening to Planet Rock on your PC.

Don’t go setting your watch, though, to the streamed version. It can have a few seconds delay between broadcast and it emerging from your PC’s speakers. (My PC stream is currently 1 minute 25 seconds behind my DAB radio broadcast.) This is due to the software buffering enough data to ensure continuous playback, so that if some data goes missing and has to be re-requested from the server or if there is a local data bottleneck the audio doesn’t suddenly drop out.

What’s nice is if you use the first URL (the one ending /planetrock.m3u) then MusicBee will also display the name of the track currently playing:

3. Save the stream as a playlist

The final thing we need to do is tell MusicBee to remember this station. It would be a bit of a hassle to have to find, copy and paste that URL every time you want to listen to the radio.

That’s all there is to it.

While I usually listen to MusicBee using the compact player view, when listening to streamed radio I prefer the mini player view which also pulls in the current track’s artwork.

I love @PlanetRockRadio. It's like someone more interesting than me playing my MP3 and CD collection!

A few weeks ago I received an email from a friend asking for help to look for a Windows application that would allow her to listen to and, more importantly, record programmes broadcast on the radio and streamed to the internet.

In my investigations I discovered Screamer Radio, a freeware application that… well, allows you to listen to and record programmes (to MP3 or OGG Vorbis) broadcast on the radio and streamed to the internet.

It’s really simple to use, is small (not bloated with features), doesn’t have adverts (unless you’re listening to a commercial radio station!) and supports a number of stream types:

One feature that it doesn’t have, which would be really useful and which can be found on similar commercial software, is to schedule recordings so you don’t have to hover over the record button. But that’s a minor criticism, for the most part I just want to use it to listen to the radio.

The Screamer Radio presets come up trumps for the first, but seems quite out-of-date for the latter two; it does offer BBC Radio 4 LW. The preset for Classic FM also appears to be broken.

After a little detective work I discovered the following URLs work:

I added them to my favourite channels by going to File > Open URL, pasting in the URL, click on OK to connect and then going to Favorites > Add current channel to Favorites.

Overall it’s a really simple piece of software to use, almost as simple as my DAB radio.