One question I get asked a lot is where can I download PsiWin, the official Psion software that connects your Psion palmtop computer to Windows. This post answers that.

END_OF_DOCUMENT_TOKEN_TO_BE_REPLACED

Let’s hear it for Psion. Not only did they make first class PDAs, which still have a massive community of user going nuts over, but their PC connectivity software PsiWin — which they stopped developing at version 2.3.3 (copyright 1997-2001) — still works perfectly even under the beta version of Windows 7 Ultimate edition.

This is what you get when you try to synchronize Microsoft Outlook with a Psion 5mx using Psion’s very own PsiWin 2.3.3 and have deleted quite a few of the entries before synchronization:

For those of you who can’t read tiny, compressed images of text, it says:

The Synchronizer has detected 63 missing or deleted items in the Psion. Do you wish to continue and delete the corresponding items?

Click No to retain the items on the other machine.

Click Yes to delete the items on the other machine.

Note: If you have deleted the same item on both machines, it cannot be replaced.

There are a number of reasons that I consider this a terrible dialog box:

Once you get past that dialog and decide that yes, you do indeed want to delete the items permanently on both PC and Psion you’re then given the option to back out:

About to permanently remove items from both PC and Psion.

The options now, at least, are a more intuitive yes or no. It’s just a shame that you have to practically melt your brain answering the previous question to get there!

Sadly PsiWin is no longer in development — version 2.3.3 (build 149) came out in 2001, and still works with Windows XP, and up-to-and-including Office 2007 — so there is no opportunity to campaign to improve these dialog boxes.

Unless someone is handy with a hex editor … anyone?

Following Mike’s helpful comment below, which made me explain myself a little better I’ve mocked up the following dialogs using Microsoft Visio:

I have created two here, which (I hope) makes it clear which machines are being referred to and what to do. At a quick glance I can tell on which machine the data is missing or deleted and on which machine’s data I’m being asked to decide. The buttons are also better labelled.

(Errorâ€™d entries on this blog are named after the popular Worse Than Failure feature.)

Over the last couple of months, whenever I have taken out my Psion Series 5mx in public there has always been someone who oohs and ahhs over it and asks if this will be the next big thing. They’re often quite surprised when I say that it was manufactured over seven years ago in 1999.

I use my Psion every day. For me it has everything I need: Agenda, Tasks and Contacts which I can synchronize with Microsoft Outlook; a word processor, a database, the ability to send and receive e-mails, and a host of other useful extras: MP3 player, UK map, street maps, dictionary, encyclopedia and a cut-down version of the Internet Movie Database (I kid you not) … and it has a decent and usable keyboard, unlike some modern PDAs. (I’m a believer in using the right tool for the job.)

There was only one thing, however, that was annoying me about my Psion: I could never remember which PC I’d last synchronized it with. Was it my home PC or my work PC?

That was until I came up with this simple, but elegant solution. I protect my trusty Psion in a Grey Pod Hardcase from Proporta, which was designed and injection moulded from crash-helmet grade ABS plastic, which has a wee pocket on the inside of the lid which I presume is to store business cards, or SD cards, or the like. 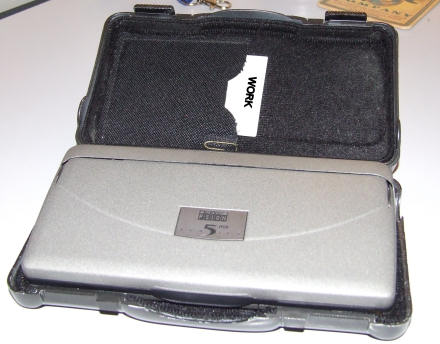 I use this little pocket to store two things: a small stash of business cards and another card on which I’ve written “Work” at one end and “Home” at the other. So now, whenever I synchronize the Psion with a PC I turn the card round to indicate where it was last synchronized.

Here’s the question that I know you’ve all be asking yourselves: will PsiWin 2.3.3 synchronize with Microsoft Outlook 2007?

Microsoft Office 2007 Beta 2 expires in nine days time on Friday 2 February so I thought it was high time that I checked to see if the fairly ancient Psion software of PsiWin 2.3.3 — released around October 2000 — would still allow me to synchronize my Psion PDAs with this shiny new version of Microsoft Outlook (my choice of PIM software).

As I’ve said elsewhere I love the new design and improved functionality of Office 2007. The new Ribbon toolbar is a genius innovation which should make creating documents much, much easier for a good proportion of Office users who don’t care much for hunting through bewildering menu options and settings, they just want to get their document written and formatted easily and quickly. It’s just a shame that the Ribbon doesn’t extend to all areas of Outlook 2007 or Publisher 2007.

You can tell how old school the Psion is: it still uses an RS-232 serial cable to connect to the computer. However, I don’t have a serial port on my laptop — not many new laptops do these days. They are so last century!! So I have a USB-to-serial converter cable which creates a new COM port (COM 5) which the PsiWin software treats as a real serial port (cunning stuff!).

As an aside, a lot of Psion users have e-mailed me asking why their USB-to-Serial converter cables don’t work. Here’s the advice I’ve had:

Many cheap adapters doesn’t have all the signals required for PsiWin to be able to establish a link.
If it’s any consolation, it probably doesn’t work with Palms either… I generally sort them in two categories, those based on the FTDI chipset, and rubbish… If by chance your adapter does have all the pins enabled you could try to switch off the FIFO buffer on the serial port as this may also cause some problems. (Somewhere in the Control Panel.)

For others it depended on when the drivers were installed:

Installing was trouble free, but getting PsiWin to see the converter was another thing entirely. My memory is clearer on this issue.

As I had installed the USB to Serial converter over PsiWin, and not as I describe above it took me an evening of uninstalls, regcleans and installs until PsiWin saw the new serial port. Since then the connection has worked flawlessly.

So now you know!

Back to the Office

So I installed Office 2007 Beta 2 on my laptop, plugged in my USB-to-Serial cable, installed the drivers, installed PsiWin 2.3.3 and tried to connect (using COM 5 — added by the USB-to-serial port software) and … it connected. Phew! First hurdle jumped. Now, would it sync?

What can I say? It did it straight away, no questions asked, not a problem: calendar items, Contacts and Tasks all copied effortlessly from my Psion 5mx into a clean Outlook installation. That’s what I like to see. Software that’s over six years old still functioning as it was designed to; good, solid, robust software from the software engineers at Psion. If only they were still manufacturing PDAs, I’d love to see what they could come up with now.

Fantastic! Looks like I’ll be upgrading to Microsoft Office 2007 then. Just as soon as I can afford to: the UK price is seemingly going to be 57% higher than that in the USA, for the same products!