The Proxim Orinoco Gold 802.11b PC Card that I ordered on eBay arrived this morning. How excited was I, as I tore open the packaging? I fired up my browser, added the MAC address of the card to my WiFi security access panel, popped the card into the Psion 7Book’s PCMCIA slot and started it up.

I won’t lead you, expectantly, down the long, sorrowful path that I then took. I’ll just let you know right now that it didn’t work.

I wouldn’t work! I couldn’t believe it. It was seated in the PCMCIA slot nicely, I’d entered the connection details correctly in Control Panel > Ethernet. Why wasn’t it working?! I fired up NetStatRF, an application that works with the “Lucent WaveLan and Orinoco radios”, to check what it reported.

It reported “Radio not active”. But it is active! At least it’s in there, and it’s an Orinoco card … surely it’s got to work! I’d done my research: the Orinoco range had been passed from company to company over the years, and released as Lucent, Avaya, Agere Systems and now had been bought by Proxim.

The Silvester EPOC Faq website says that the Lucent/Orinoco/Avaya Gold cards are compatible with the 7Book (Series 7 with netBook ROM installed), as they have a Lucent Hermes chipset and an FCC ID of IMRWLPCE24H.

I checked the FCC ID on the bottom of my Proxim Orinoco card: IMRPC2411B. I suddenly felt cold.

After a bit of (further) online research I stumbled upon the Lucent Wireless Card page on the Seattle Wireless website, which told me what I needed to know:

The Name & Brand associated with this card has changed several times. Known originally as the Lucent card, the “Orinoco” card was also later sold under the brand “Agere Systems”. There were several different logos/labels because of these changes. Recently (Dec 2002) Proxim has bought the Orinoco product line and released a different card under the “Orinoco Gold” label to add more confusion to this Chaos 🙂

Note that the Proxim Orinoco b/g and a/b/g adapters use the Atheros chipset. The b/g card has an MC connector for external antennas.

As OEM card may be sold as: IBM as “IBM High Rate Wireless LAN Card”, Compaq WL110, Compaq WL210 (PCI conv & WL110), Avaya, Buffalo …/… It’s a long list. All rebrands, however, irrespective of gold, silver or stickers on the front, have the same FCC ID: IMRWLPCE24H

A vital piece of information: the Proxim Orinoco cards use the Atheros chipset, not the Lucent Hermes chipset. No wonder it doesn’t work!

Returning to eBay I found this card, the Lucent Orinoco Gold.

I emailed the seller and asked if the FCC ID was IMRWLPCE24H. When he confirmed that it was, I shelled out £24 for it, inc. P&P. Third time lucky, perhaps?

What I’ve learned is that when chosing a WiFi card for the Psion 7Book/netBook knowing the FCC ID is essential. But not all card manufacturers display this information on their websites or in supporting documentation. I only discovered the FCC ID of the Proxim Orinoco Gold once I had it in my hands (and sadly, only after I’d had it in my Psion).

While searching for further information about Psion and WiFi I came across a section on the excellent Pscience5 website about WiFi on a netBook.

Not only does it give a clear, illustrated walk through installing the Buffalo card (WLI-PCM-L11GP) it also refers to a number of useful network tools, including a Virtual Network Computing (VNC) client for the Psion (another version is available as VNC for Symbian) which will allow you to connect to your Windows machine!

A couple of nights ago I found on eBay a Psion Series 7 ROM upgrade chip for the bargain price of £45 + P&P.

This piece of silicon magic instantly upgrades the Psion Series 7 to a Psion netBook, giving more memory, unlocking a faster processor speed (upped from 132.71 MHz to 191.692 MHz), and allowing Ethernet and WiFi connection.

Imagine my surprise when I discovered that the eBay seller was none other than regular View from the Potting Shed blog commentator Nigel Alefounder. I also ordered a Cisco Aironet 340 series 11 Mbps Wireless LAN adapter from him.

They arrived this morning, and my Series 7 is now proudly rebranded as a so-called “7Book”. The upgrade was simple: a complete power down (including backup battery), remove the Series 7 ROM, insert the netBook ROM, power back up (backup battery first, main battery, and then power cable), insert the Compact Flash card containing the latest netBook OS image file (R158), and switch on.

The Cisco WiFi card took a little more work, and I’ve still not managed to get it to connect to our wireless network, and from what I’ve just read on Silverster’s EPOC FAQ site I never will.

It appears that some versions of the Series 7 / 7Book do not provide enough current to the PCMCIA port; the slot into which the WiFi card plugs. I discovered on the PDA Street forum that the current of the PCMCIA port on the Psion 7 = 300mA, and on the netBook = 750mA. The Cisco Aironet 340 series seemingly runs at 580 mA which would explain why it doesn’t work on my 7Book.

I’ve ordered a Proxim (Lucent) Orinoco Silver for £8.75 from eBay, which I’m hoping will work; its current is a much more efficient — and, more crucially, 7Book-capable — 285 mA. One advantage of the Orinoco over the Cisco is that it supports 64bit WEP encryption (improved security), and you can also use the built-in NetStatRF application (which scans for available wireless networks, but is only compatible with Lucent WaveLAN / Orinoco cards).

WiFi for Psion is nearly at Potting Shed HQ, but I’ll just have to wait a little longer. 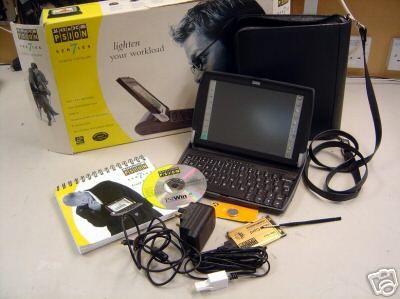 I now have two Psion Dacom Gold Cards surplus to requirements. Free to a good home, or homes. If you want them you can have them. 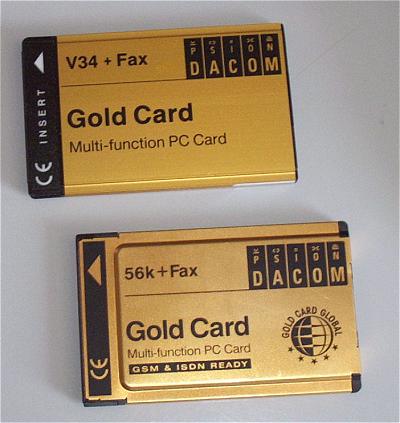 You’d get them just as you see them. I’m happy to pay postage, they are no use to me now.

For a couple of days I’ve been struggling to work out how to get my new Series 7 to connect to the web via the Psion Dacom Gold Card (56k+Fax) modem that came with it. At last it has worked! … using a different Gold Card.

I now have three Gold Card Multi-function PCCards: 2 x 56k+Fax and 1 x V34+Fax. I don’t have the connector for the V34, but I’m going to test out the other 56k model to see if it really wasn’t working. How fun!