In the autumn of 1996, I moved into Flat 3, Lansdowne Centre, Law Street, Bermondsey. At the time I thought this would be a sojourn before moving in with a friend but I settled in quickly and it remains today one of the best places I’ve ever lived.

END_OF_DOCUMENT_TOKEN_TO_BE_REPLACED

A few months ago, my team at work considered using DSDM’s MoSCoW prioritsation technique for our project’s user stories in Jira.

After a little pondering, this morning I worked out how to do this in our cloud-hosted Jira. This short post shows you how.

END_OF_DOCUMENT_TOKEN_TO_BE_REPLACED

In June 2012 I replied to a post on a local Freecycle mailing list offering “hundreds of metal CDs”. When I got them home I’d been very kindly given around 195 (give or take a few). I’ve been more or less reviewing one CD a week ever since on my 195 metal CDs blog.

Some weeks are easier than others for finding the time to write a review. For albums that I particularly like I sometimes cheekily listen to it for a further week before scribbling down my thoughts.

I’ve been blogging now for well over ten years, so why has it only just occurred to me to get at least one week ahead of myself and review an album at least a week or two in advance?!

That would clearly take the pressure off. I could write the review whenever I wanted and schedule it for the appropriate Monday. As you can see from this image I plan my reviews well in advance using Trello: 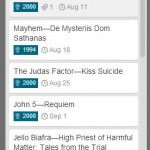 So that’s what I’ve done this afternoon. I had a run of albums by Italian black/gothic metal band Opera IX scheduled for the next few weeks so I’ve just grouped them and reviewed them in chronological order this afternoon.

It will be interesting to see what difference this makes in terms of finding the time to review the albums and how much I enjoy them given that the pressure has been relieved a little.

Yesterday afternoon and this morning Reuben, Joshua and I have been making a “nee naw car” from the box that Isaac’s new Baby Jogger City Classic pushchair arrived in. Here is the almost-finished article.

The car was made from a Baby Jogger City Classic pushchair box, painted with Wickes one coat matt emulsion “Victorian Red” (the same colour as our kitchen and dining room).

The word “FIRE” was cut out from a roll of big labels (a little larger than A5) that we bought at the Borders Scrap Store in Selkirk years ago. As were the lights and radiator.

The ladder was made from cardboard from the box.

The wheels were made using Microsoft Publisher 2010 and coloured in by Reuben and Joshua. The Pontypandy Fire and Rescue Service badge was sourced on the Web and printed out on our laser printer. I was going to draw it but was being climbed on at the time.

Close-up of the front of the new, homemade Nee Naw Car (featuring Fireman Sam and Firefighters Reuben and Joshua).

The blue flashing light is made from a Robinson’s Fruit and Barley bottle cut off at the bottom and stuffed with blue tissue paper, with black gaffa tape at the bottom to cover the jagged plastic from my hacking attempt at cleanly cutting it off with a pair of kitchen scissors.

Improvements to be made based mostly on consumer feedback and rigorous user-testing:

For a few months we’ve been starting to use Agile, and specifically Scrum, methods in planning and managing our Web projects at work.

This week we adopted a new practice: planning poker.

Like many teams starting out with Agile practices we didn’t just jump in feet first and adopt every Agile method going; that would have been too much to take in. So we began with a few methods:

The photograph above, taken a couple of months ago, shows the planning board in our office — an information radiator — that shows us at a glance how many tasks are left to do, what’s currently being worked on, what’s in testing, what’s done and (unlike, I would guess, most other Agile boards) what we’re waiting for.