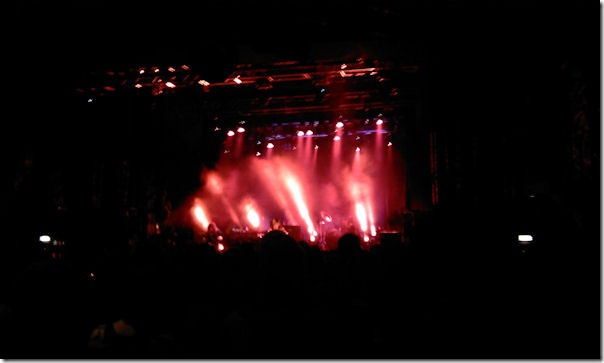 I’m just back from seeing Swedish progressive metal band Opeth at the HMV Picture House on Lothian Road, Edinburgh. What a fabulous gig… but equally it was a very odd gig.

It didn’t go unnoticed either. About an hour into the gig, a group of fans stood at the back and brayed “Play some f***ing METAL!” after every song.

After the gig I heard some folks referring to it as a ‘controversial’ Opeth gig. And in many ways it was. There to support Heritage, the band seemed to almost completely ignore their musical heritage in death metal. Not one song with death metal-style, gruff, vocals. Not one. Not even during the encore.

There were moments, if I’m honest, when I felt like I was in the Spinal Tap crowd witnessing the birth of “Jazz Odyssey”. I guess I wanted more energy from the stage, I wanted to feel immersed in the sound, to feel the power of the drums and overdriven guitars shaking my body.

But it was quieter, and more thoughtful; more Radio 4 than Planet Rock. Quite unexpected.

I often say that artists should be free to do what they like, to follow whichever musical path rocks their boat. Who am I to demand what they do, or play? So I can’t really complain: they played 90 minutes of their own material, drawn from quite a few albums from their back catalogue (each of which I have, and love). The set had integrity, it was played beautifully. I loved the music. I loved the performance. But I still left feeling disappointed.

I enjoyed it, but it felt… incomplete. It wasn’t the ‘dirge for November’ that I was anticipating.

All in all, though, that was the second best Opeth gig I’ve ever been to; I’ve been to two.

One of my favourite live bands, Amplifier, are touring in December and are making it as far north as Glasgow—it would be great to see them again.

You can check out Amplifier on Spotify, or for the next couple of months or so you can stream their latest album The Octopus and Fractal EP on Progstreaming, a website from The Netherlands that offers free streaming of the latest progressive rock records for “a maximum of two months”. They currently have 97 albums to choose from.

This evening I’ve listened to Transitions by Mandrake Project and Communication Lost by Wolverine. Both really enjoyable albums. On the back of that I’m definitely going to check out more of Mandrake Project.

I love listening to new music.

30 day song challenge day 26: A song that you can play on an instrument

I can play that song.

I’ve played it live and everything. In front of a human audience, no less.

30 day song challenge day 22: a song that you listen to when you’re sad

I love this song by Fish. It is beautiful, romantic, nostalgic and regretful.

There’s one line from this song that comes back to me again and again, when things are too hard and I just want out: “Can you get it inside your head, I’m tired of dancing?”

I listen to this piece of music when I’m down, and at the end of it I can always sigh, know that I’m not on my own and just get on with things.

(My final catch-up post of the weekend, posted on 23 May, after a crazily-busy weekend… excuses, excuses! Consider this a gentleman’s excuse me!)

I had mixed feelings this morning about the news that Mike Portnoy has left Dream Theater.

According to his website he wanted to take a breather as “the DT machine was starting to burn [him] out …and [he] really needed a break from the band in order to save [his] relationship with the other members and keep [his] DT spirit hungry and inspired.”  The rest of the band disagreed: they didn’t want to stop. So Portnoy decided to leave.

On the one hand, I felt sad.  Sad that he’s left the band that he has been so central to for 25 years. Sad that the rest of the band couldn’t put his needs above their own and give him the space that he needed.

While on the other hand I felt a great deal of respect for Mike Portnoy that he was able to be true to himself and just say, “Ok, this is what I really need so this is what I’m going to do.”  Inspiring stuff.