f.lux is a genius piece of software (available for Windows, Mac OS X, iOS, and Linux) that I’ve been using for a few months now, that has genuinely helped me get to sleep quicker at night.

It does one job, and it does it brilliantly: f.lux adjusts your computer display according to the time of day.

Generally monitors are set very bright with a blue-y colour temperature, that makes them look great during the day. As the f.lux website puts it:

During the day, computer screens look good—they’re designed to look like the sun. But, at 9PM, 10PM, or 3AM, you probably shouldn’t be looking at the sun.

f.lux fixes that. Once you’ve told the program where in the world you live (so that it can work out when the sun will rise and set) and what kind of lighting you have it gets to work.

For me, the application runs when Windows starts, and I quite enjoy watching my monitor at sunset slowly change as f.lux kicks in; I’ve set mine to fast transition (over 20 seconds).

When the sun sets f.lux adjusts your monitor to look like your indoor lights (for me that means that that whites take on a warmer hue similar to the colour of paper the Financial Times use). And then when the sun rises again, the blues return and it looks like sunlight once again.

I noticed a while ago that if I had been using my computer a lot in the evening it was taking me longer to get to sleep.

It turns out that blue light affects sleep patterns and as monitors are back-lit—effectively firing a lot of blue light straight at you—you end up with a lot of exposure to excessive light at night.

A couple of hours looking at a tablet or PC screen in the evening can knock off your sleep by about an hour, researchers have found.

The f.lux developers have taken this into account and so “f.lux adjusts colours in a way that greatly reduces the stimulating effects of blue light at night.”

I have to admit that I was very sceptical at first, and the first time I tried it I hated it. Everything went slightly peachy. But I stuck with it and within a couple of days I was a convert.

And while I used to lie awake in bed for half an hour or more, since using f.lux on my Windows 8.1 PC I now drop off to sleep within minutes.

If you do a lot of work on your computer or iOS device after sunset then I thoroughly recommend f.lux. 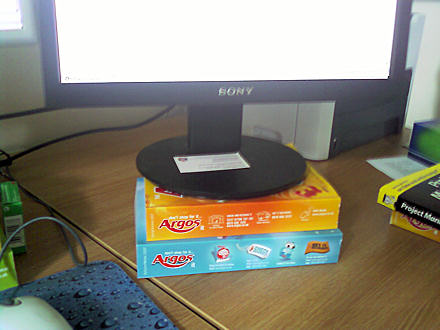