By default the Windows 7 taskbar combines all open applications within its taskbar icon, like this:

The only way to tell whether an application is open or not is to notice that its icon is subtly highlighted.

A few weeks ago, however, I stumbled upon a setting in Windows 7’s Taskbar and Start Menu Properties dialog that did this to my taskbar:

The open applications have now expanded and include something of its title. And I have to say that I rather like it. In my opinion it combines the best of both the Windows XP taskbar and Windows 7 taskbar.

A couple of months ago I came across a set of the most beautiful mahjong icons created by web developer and icon designer Martin Persson.

I got in touch with Martin because the set was almost complete: it had everything for the Western game apart from flowers and seasons. After a short conversation by email I sent Martin scans of the flowers and seasons from my Gibson’s mahjong set and a few weeks later he made his new icons available for download from his website.

Martin Persson’s set consists of 37 mahjong icons in both 64px and 128px sizes, which are free for both personal and commercial use, provided that you link to his site. 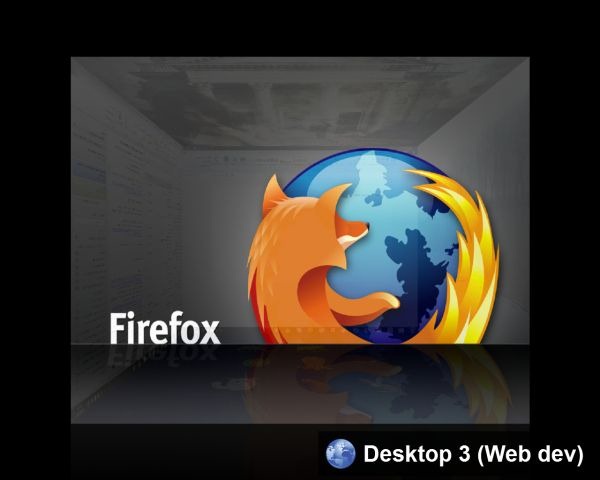 I use two monitors on my PC at home, three on my PC at work but frequently I still run out of room on my desktop to view all the applications that I’m currently running. That’s where virtual desktops come into play.

Virtual desktops have been common in the Unix and Linux world for a long time, Apple introduced them by default in Mac OS X 10.5 in late 2007, but Windows still doesn’t come with a virtual desktop application as standard.

Microsoft acquired Systernals in 2006. They launched Desktops in 2006 which allows you to organise your applications on four virtual desktops.

The application is small (the installer is only 60 KB), fast and reliable but it has limitations:

After checking out various virtual desktop applications, including the freeware VirtuaWin, I settled on DeskSpace from Australian software company Otaku Software, which costs US$24.95 (currently around £15.50).

DeskSpace is fast, highly customizable and looks fantastic. A few of its features: 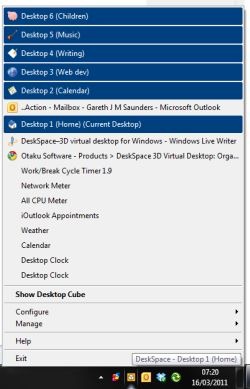 When you right-click the icon in the notification area you can see what applications are currently open on which desktop. A really nice feature is the ability to drag applications from one desktop to another on that list.

One niggle for me is that the options are split between two menu items—Configure and Manage—as I keep forgetting which configuration option is where; it would be nice to have all the options in one unified location.

I would also have liked to have seen some of the options combined such as customizing the wallpaper, names and icons for each desktop together on the same screen.

But these are minor points, as it doesn’t take long to set things up the way you want them and then just leave it.

One superb feature is that the software license is for individual-use which means that you can buy one copy and install it on as many machines as you use, for example a desktop and laptop.

Given that my laptop (as most do) has only one screen this has become an invaluable tool.

DeskSpace has been a really welcome addition to my workflow, particularly at work where I can assign separate desktops for dealing with support calls, FTP, graphics manipulation, etc.

It supports both the 32-bit and 64-bit versions of Windows XP, Windows Vista and Windows 7 on low-end netbooks, high-end desktops and everything in-between.

Why not download the trial version of DeskSpace today and give it a go?

I liked it so much I bought the … software.

I’ve spent the last 30 minutes or so looking for a quality collection of file type icons that could be used for a Web project I’m working on.

I’ve just found the Silk collection at www.famfamfam.com which should fit the bill nicely.