After 871 days (that is 2 years, 4 months and 20 days) as warden at Agnes Blackadder Hall, University of St Andrews, I’ve hung up my gown and moved on.

I loved being warden, living and working amongst around 540 students and supporting a team of six assistant wardens. But it wasn’t great for my health, to be honest. It turns out you sometimes need sleep and time for yourself. And for many weeks I got little of either.

So I have moved back down the Fife coast to the East Neuk and am living in a wee two-bedroom mid-terrace house in Crail.

This is my third house move in as many years.

I’m much closer to my children now, and it’s an area that I used to cycle around over the years so I’m looking forward to getting out on my (newly serviced) bike over the next few months and gently improving my fitness.

The boys like my wee house and have been over to stay for a few weeks, and a few overnights during the week too.

I needed to buy a dining table and benches and a couple of chests of drawers (at Ikea, of course) plus a bunch of storage boxes for linen and shoes. But two weeks in and I have fully unpacked now and organised almost everything the way that I’d like it.

Here is to relaxing for a bit, regaining my fitness, losing the 2 inches or more than I put on my waist over the last 871 days, and figuring out where life will take me next. It’s exciting…

Here’s a video I found online from the developers. My house is featured about 17 seconds in.

Last weekend I moved flat—from one side of hall to the other—to make way for a development company to come in and arrange for the demolition of my old flat. Not quite the scene from Pixar’s Up!, but because the student hall of residence in which I live and work is to be extended over the next year.

So, I moved from here…

That’s certainly made it easier to unpack, but it has been unexpectedly unsettling.

On the morning after I moved, I woke up in my (almost identical) bedroom and wondered where the wireless network point, that I previously could see from my bed, had gone from the ceiling in the hallway.

I got up and walked into my (almost identical) living room. It simply looked like someone had packed everything into boxes, changed the view outside my windows, and then left.

This flat has different creaks and noises at night. The heating system sounds different, as does the washing machine. Not things that I would have anticipated, but when everything else looks so similar it’s quite disconcerting.

This flat also seems to have more avian visitors. There is a small family of I-haven’t-worked-out-what-yet living in a nest near the front door, and a few nosy jackdaws that have got up close and personal, as well as ripped open a black bin bag that I’d dumped outside for a couple of hours while I waited for the rain to go off.

What is nice is that on this side of hall, I can hear birds singing in the morning. There is less foot traffic on this side, too. I’m looking forward to the relative quiet, and fewer disruptions at night—my previous flat was on one of the main paths in and out of hall.

After only a few hours, last weekend, my oldest, Reuben, said, “I’m really beginning to feel settled in your new flat, daddy.” After a few days to unpacking and getting used to the new sounds, so am I.

If you want to come visit, you will be made most welcome.

How was your weekend? Good? Ours was okay, thanks for asking. Other than Jane spending most of yesterday (Sunday) in two hospitals, in St Andrews and Dundee, with young Isaac (10 months) who hadn’t been at all well last week with a vomiting bug that had left him a little dehydrated.

What redeemed it, however, as a good weekend…obviously…was that we finally got around to tidying up the linen cupboard.

Before Reuben and Joshua were born, in November 2008, we reorganised the whole house and tried to think through what we might need to find in a hurry once they boys’ were born. For example,

Q. What if the boys’ are sick in their cots?
A. We’ll need quick access to towels and fresh linen

That was where Operation Gareth-Really-Is-Obsessively-Organized-(-With-A-Zed-) began. Together, Jane and I, reorganised all the cupboards in the kitchen, the drawers in the sideboard in the dining room, the bathroom cupboards, and finally the linen and towel cupboards on the landing.

And then I created A4 cheatsheets to stick to the inside of the doors. The example above is for the linen cupboard, as updated this morning.

I took as my inspiration the title of Steve Krug’s book on Web usability: Don’t Make Me Think.

My thinking was that with twins we weren’t going to get that much sleep—oh! how right I was—and at 03:00, in an already sleep-deprived state, we wouldn’t necessarily want to be hunting through a jumble-sale-of-a-linen-cupboard hunting for that elusive pillowcase or duvet cover. Now, we just have to check the cheatsheet on the inside of the door and … wow! there it is.

It’s also really handy for those house guests who insist on changing their bed’s linen at the end of their visit (hint, hint!).

I also have a cheatsheet taped to the inside of the following cupboards:

“I always get such a slagging for these,” I said to Jane on Saturday afternoon as we re-organised the linen cupboard.

“I know,” said Jane. “They are really useful, but most people wouldn’t go to the effort of creating a sign for the inside of their cupboards.”

They are really useful.

And just to prove it, the linen cupboard cheatsheet proved itself again this morning as we changed the linen on Joshua’s bed at 06:00 after he’d been sick on it. And himself. And his cuddly toys.

Here’s my prediction for 2008. This will be the next ‘big thing’ in daytime TV.

It will be a TV programme where two presenters will help a family find their dream home in the country. Meanwhile the entire family will be given complete make-overs and where necessary plastic surgery.

The team will also assist in the selling of the house from which they are moving, by suggesting interior decor tips to make the house more attractive to potential buyers. And sell the entire contents of their attic at an auction. Or car boot sale.

Once the new ‘dream home’ has been purchased a team will come in to completely gut and renovate the house and garden.

I predict that this programme will appeal most to those on witness protection schemes.

On Thursday of last week Jane and I learned that our offer for a house in Cellardyke, Fife had been accepted. I still can’t quite believe that we will be house-owners.

We’re not moving; that seems to be the first question people ask, along with how can we face to commute an hour into Edinburgh in the mornings. The house is an investment; somewhere to use the money we made from the sale of Jane’s flat in Craigmount last year; somewhere to escape to; somewhere to holiday from.

Cellardyke is a small, old fishing village next to Anstruther, and about 15 miles from St Andrews (my old Alma Mater).

The house is a former fish shop, with character and an amazing terraced garden that reaches high enough up the hill to allow you to sit at the top and look out to sea, out towards the Isle of May. 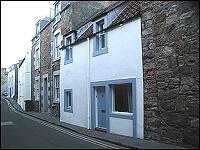 The front door from George Street 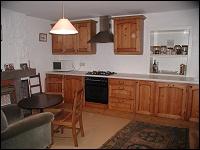 The kitchen / dining room, the only room downstairs 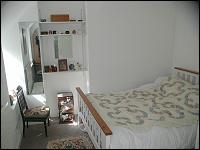 The main bedroom (there are two bedrooms) 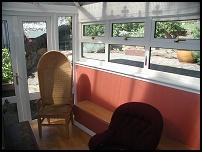 The lounge / conservatory area at the rear of the house 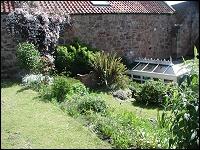 The garden, looking down towards the lounge / conservatory 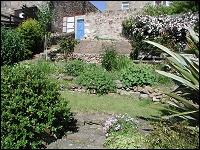 Looking up the garden.

More details and pictures when we get them.