30 day challenge day 7: A song that reminds you of a certain event

Queen—The Show Must Go On

On Monday 20 April 1992 I travelled down to London for The Freddie Mercury Tribute Concert at (the old) Wembley Stadium.

It was, and still is, the largest concert I’d ever attended. And it was brilliant! That day I watched Metallica, Extreme, Def Leppard, Gob Geldof, Spinal Tap, Guns N’ Roses, and Queen perform on the same stage (although not at the same time!).

It was the first and last time I ever saw Queen perform live, but sadly without the incredible Freddie Mercury.

Towards the end of the concert I began to get anxious that I would miss the last tube from Wembley Park back into the city; I was staying with my mum’s cousin at Streatham Common so needed to get a train from either Victoria station or Clapham Junction.

I felt sorry to be leaving early, but I wore an enormous grin on my face and kept looking back at Wembley Stadium lighting up the sky. An incredible experience. 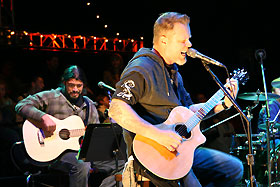 I’m loving the two acoustic gigs that Metallica played at The Bridge School Benefit, Mountain View, CA a couple of days ago. The gigs are now available at LiveMetallica.com with proceeds going to charity.

Highlights include a rendition of Dire Straits’ Brothers In Arms and an acoustic arrangement of Disposable Heroes.