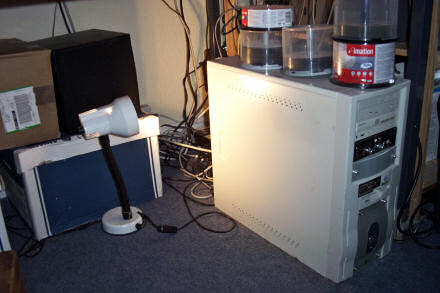 Here’s my Top Tip for the day: a desk lamp beneath my desk allowing me clearly to see the (labelled) connections on the back of my PC case.

The lamp is for those moments when I have to crawl down there to (un)plug an audio or USB cable, or when I’ve got the side panel off the box just making sure that everything is okay. I’ve got so many power sockets under there anyway I might as well employ one to help me while I’m guddling about under my desk, like some kind of IT troll. 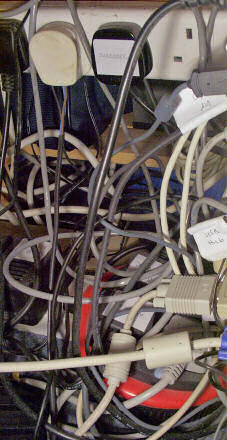 Another thing that I find useful is to label cables. Take a look at the mess of cables beneath my desk (right). The only way that I’m able to determine which cable is which, especially when it comes to power cables and USB cables, is because I label them all.

All power cables have a label on the plug telling me what they are, e.g. PC, Monitor, hp 1000 (laser printer), hp 5150 (colour printer), etc. No more accidentally unplugging my PC when I meant to switch off the printer.

All the USB cables have a little label flag (simply a label folded round the cable and back onto itself) on each cable at the PC end, telling me what they are, e.g. HP 5150 (colour printer), USB Hub, etc.

At the other end, on my 4-port USB Hub I have little label flags there too: Belkin Media Reader, hp 1000, SiPix Webcam, and IrDA.

This way I don’t have to waste time untangling cables between peripherals and my PC to find out what’s what. I just have to switch on my under-desklamp and read the labels.

(The lamp is really good for keeping my feet warm, too, on cold mornings!) 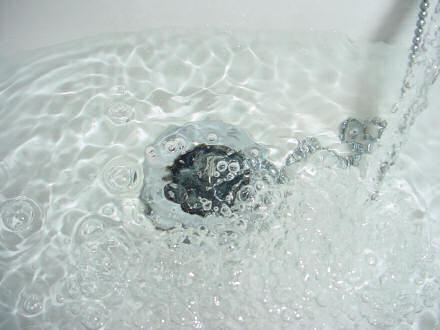 Tell me this: what is the point of installing a water heater that holds less water than the bath?! I’ve never had a hot bath here. 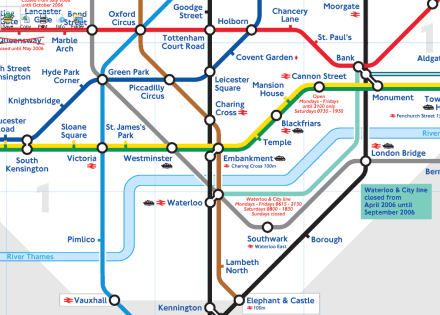 A portion of the award-winning London Underground map. I used to live near Victoria and then between Elephant & Castle and Borough.

During the last couple of years as I’ve thought more about what makes for good website design I’ve been encouraged to read more widely around the subject of design in the real world. Two books that I’ve found particularly interesting and helpful are Design for the Real World: Human Ecology and Social Change by Victor Papanek and The Design of Everyday Things by Donald A. Norman.

The good, the bad and the ugly

Design, both good and bad, affects us all. Good design very often goes unnoticed, it allows us to get on with whatever task we are doing without thinking about it. We don’t waste time stopping to try to figure out how to use something, whether it is a door handle or a pen or a computer’s graphical user interface. Bad design very often stops us in our tracks. At best we’re forced to puzzle for a few seconds about whether to push, pull, twist or turn the door handle, at worst we give up and try something else.

Despite the leaps and bounds made in the last few years in making computer interfaces easier to use and understand (think of the difference between Windows 3.1 and Windows XP, for example) there is still a long way to go before computers can be used without even the shortest introductory course.

You are often not to blame

Something that I often find when helping people with their computer problems is that people frequently feel guilty or blame themselves for not being able to do something on their computer. “I’m really sorry, I’m not very good with technology,” they’ll say once I’ve finally figured out that the way to change the default spelling dictionary from US to UK within their application of choice is hidden within a complex array of menus and options, or that the only way to save a document in Lotus WordPro Millennium on Windows XP is that it has to be within a non-customized, yellow folder because of the way that XP handles “protected folders”.

But the problem isn’t that these people are stupid, it’s that the design of these applications still isn’t intuitive enough and they very often don’t offer users error messages that the average user can understand, using terms used are too “geeky”. 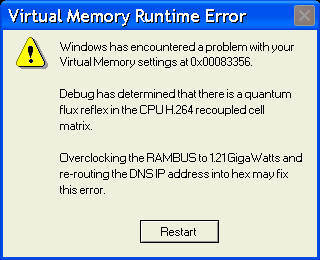 Part of the problem lies in not being able to grasp the conceptual model behind what we are trying to do. Most users can easily grasp the concept of a desktop and a recycle bin, of folders and files because of how we use these in the real world. But their understanding falls down when they are asked to set spelling preferences in a dialog box that they can only access via Options… under the Tools menu. And then try to explain the concept behind WEP encryption for wireless networks, or JPEG compression settings to someone!

computers should help us become smarter and work together better, and in many ways, they have. But instead of progressing, tool builders these days are moving in circles, treading water rather than swimming forward.

One reason for this stagnation is that we seem to think we’ve reached the limits of what software can do for us and what we can do with software. Nothing could be further from the truth. Our software tools — particularly in the collaboration space — are nowhere close to fulfilling their potential.

It is one of the reasons that I’m delighted that Microsoft have completely and radically redesigned the user-interface for their forthcoming version of Microsoft Office 12.

In previous releases of Microsoft Office, people interacted with the applications through a system of menus, toolbars, task panes, and dialog boxes. While this system successfully provided access to a wide variety of features, it became increasingly challenging to add capabilities in a way that made it easy for people to take advantage of them.

The overriding design goal for the new UI is to deliver a user interface that enables users to be more successful finding and using the advanced features of Microsoft Office. An additional important design goal was to preserve an uncluttered workspace that reduces distraction for users so that they can spend more time and energy focused on their work.

I’ve never found Microsoft Word’s menus particularly easy to use; I don’t find them as intuitive as I do the menus in Lotus Word Pro or OpenOffice.org. So I look forward to trying out this new design. And how long before other applications follow suit, or at least have the courage to move away from the current muddle of menus, sub-menus and confusing toolbars of incomprehensible icons.

So, I was delighted today to read on BBC News that the London underground map has been voted one of Britain’s best designs of the last century, along with the Spitfire and Concorde.

When Jane and I were in London a couple of weekends ago I was admiring the simplicity and beauty of the London Tube map, because while it is not geographically accurate it very effectively and efficiently maps the relationships between stations. Which is all you are really concerned about while using the Tube — you want to know where you are, where you want to get to and where you may have to change. It is good design largely because it puts the user’s needs first.

The London Underground map was designed by Harry Beck in 1931 when the Tube grew so large it became impossible to map the lines and stations geographically.

Instead, Beck designed the map based on an electrical circuit, with each line in a different colour and diamonds for interchange stations.
(Source: BBC News)

Now that is good design. It is wonderfully usable, and quite aesthetically beautiful too. If only all design could be like that.

Donald A. Norman ends his book with this plea:

If you are a designer, help fight the battle for usability. If you are a user, then join your voice with those who cry for usable products. Write to manufacturers. Boycott unusable designs. Support good designs by purchasing them, even if it means going out of your way, even if it means spending a bit more. And voice your concerns to the stores that carry the products; manufacturers listen to their customers…

And enjoy yourself. Walk around the world examining the details of design. Take pride in the little things that help; think kindly of the person who so thoughtfully put them in. Realize that even details matter, that the designer may have had to fight to include something helpful. Give mental prizes to those who practice good design: send flowers. Jeer those who don’t: send weeds.