This afternoon we had a visit from Isaac’s godfather, the fabulous Mike McQuaid. As we stood in my study watching the boys playing LEGO® Marvel™ SuperHeroes on my PC I remarked to Mike that I wished that there was an option to use both my monitors, rather than squeezing the two-player co-op onto one 1920 x 1080 screen.

Mike was pretty certain that should be possible and after a quick ‘google’ he unearthed information about NVIDIA® Surround, which “joins multiple displays into a single immersive viewing surface”, typically used for full-screen gaming or watching full-screen video. However, we soon discovered that it requires three displays and I have only one.

This evening, not taking no for an answer I did some internet searching of my own and discovered SoftTH which claims to do the same thing as NVIDIA® Surround but on any number of monitors regardless of whether their resolutions match or not, and so long as they are plugged into a PCI Express graphics card.

I read somewhere that configuration could be a bit cumbersome but it actually turned out to be fairly straightforward. The trickiest bit, to be honest, was locating the game files (see below).

We have quite a few LEGO games installed so I had to hunt around for their various locations within C:\Program Files (x86):

I have a fairly decent graphics card (NVIDIA® GeForce GTX 660) so this worked for each LEGO game I tried. I didn’t play each game for long so I couldn’t attest for how reliable this is played over hours, but I couldn’t see anything that might suggest that it wouldn’t. A few notes from my 30 minutes experience of this…

I discovered when returning to the games that if I had any other applications open on monitor two (I’m running Windows 8 here) then once SoftTH was running it still showed the taskbar.

My workaround was to right-click the taskbar before the game started and select “Auto-hide the taskbar” which slid it safely out of the way.

The first real niggle I had was when selecting a new character why does the game present the character table in such a squashed-up way?!

The same is true when both players change characters at the same time.

Not suitable for one player

My second caveat is that as beautiful as the periphery scenery looks while playing, game play isn’t very sustainable if you are playing a single player game because your character stands right in the middle of the screen, and so is divided between the two monitors.

My last word of warning is more of a hunch than from experience: I imagine that certain pre-rendered cut screens throughout the game may display in a strange way as they are not optimized for such a wide screen.

UPDATE: Actually, the cut screens on the whole were okay. You do lose some detail as you’re essentially viewing them through a huge letterbox, but it’s mostly viewable.

Targeting is disrupted a little

UPDATE: One thing I’ve noticed is that targeting with certain objects is now a bit off with the double-screen set up. For example, on the opening level with Hulk and Iron Man you need to target a water cannon at Sandman: where you direct the cannon and where it actually sprays are two different locations. On the next level you need to target one of Captain America’s locks, but it’s near impossible to line it up properly without quickly nipping back to a 1920 x 1080, single-screen resolution.

On the whole, I was really impressed. It was simple to set up, with absolutely no configuration from me.

I’ll show this to the boys tomorrow and see what their verdict is: usable or not? Then I’ll report back.

Reuben and Joshua were invited to a party taking place in Leven this morning. Our friend Helen offered to drive them there in her small bus; what her seven children teasingly refer to as ‘the loser cruiser’.

Remarkably I managed to get both boys dressed (with jumpers and shoes) in 25 minutes (could that be a record?), the birthday present was wrapped and the card was written. All we had to do now was wait.

I found myself thinking: if only there was a way that allowed me to see what was going on outside while still sitting comfortably at my study desk.

Wait a minute! I’ve got a webcam that might just… wait… it does! It stretches from my desk over to the window.

Here’s a fun application: C64 yourself.

Drop an image (PNG or JPG up to 2 MB in size) onto the website and it will convert it to a Commodore 64-8-bit style image. It has all sorts of retro loader-screen loveliness while it does it.

This evening I put the finishing touches to my new cheap-and-cheerful network storage: a USB drive attached to my BT Home Hub 2.0 (the shiny, black one).

The first step was to buy a new USB flash drive. I went for this one from 7DayShop.com. It’s a 32GB USB 2.0 drive and cost me £20.99. Usefully the swivel cap comes off quite easily. 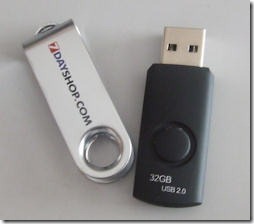 (When I tried this out at first I used an old 256 MB flash drive that I had in my Big Boy’s Drawer of Interesting Things™.)

Round the back of the BT Home Hub 2.0 is a USB port. They’ve even, conveniently labelled it “USB”. Plug the USB drive into the port.

(The dust is optional.)

Assuming that you’re connected to your BT Home Hub, open a Windows Explorer window and enter the following network address in the address bar: \\BTHUB\Disk_a1 then hit Enter.

To save you having to type in the network address every time you can map a network drive to that location.

In Windows 7, open My Computer and click on the “Map network drive” button on the toolbar at the top:

A dialog windows will pop-up. Select a drive letter and enter the network address, as before, in the Folder input box:

You now have a network drive:

I’m going to use mine for backing up a few files and as a useful location for sharing documents between PC and laptop.

I imagine that this isn’t the most secure of solutions, as anyone with access to the network could gain access to the files, if they know the network address, but as a cheap and cheerful way to share files across multiple computers without the other PCs needing to be switched on this is ideal.

Oddly, after a couple of weeks of this working fine I can no longer connect to \\BTHUB\Disk_a1, the PC just tells me that it cannot find the hostname.

It appears that this is not an exact science.

On Friday I received this email from Electronic Arts, advertising their latest football game FIFA 12.

The email subject said: FIFA 12 – are you ready to be taken to a new level?

But I can’t help thinking after hearing this on the BBC Radio 4 Today programme: “Fifa ‘credibility completely shot’:

That it might not have better been titled: FIFA 12 – are you ready to be taken to a new depth?