I remember the first time I ever heard a Celtic Frost album. Everything about it was other-worldly: the music, the lyrics, the LP artwork.

I saw Celtic Frost live in Glasgow a few years ago. It was an event. In the words of Peter Brook: “The Theatre of the Invisible-Made-Visible”.

After Tom Gabriel Warrior left Celtic Frost in April 2008 he formed Triptykon. This is the official video of Shatter taken from their EP of the same name which was released today. 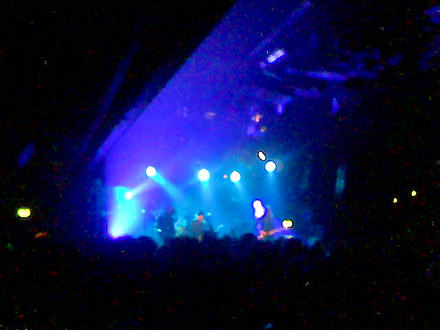 Celtic Frost obviously brought balance to the force in concert last night. For a band, playing in Glasgow, with the word “Celtic” in their name their light show was mostly a “Rangers”-blue! 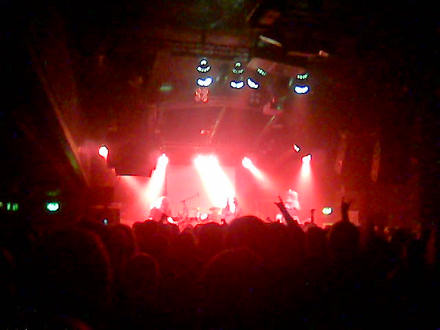 Kreator, on the other hand, was more of a “red” experience.

The evening kicked off with black metal band Watain, from Uppsala in Sweden. In saying that they were indeed ‘my cup of tea’ you have to bear in mind that I don’t drink tea. While I could appreciate their musicianship, unfortunately the music itself really did nothing for me. In the words of my Mum: “A lot of noise and shouting”!

Though to be honest, I was standing in the merchandising queue for most of their set. However, they did nothing to endear themselves to the crowd when they ended their set by thanking the crowd thus:

Englaaaand! You’ve been a wonderful crowd!”

Or words to that effect.

Legion of the Damned

Next on our bill of bands-with-cheery-names were Legion of the Damned, from The Netherlands. They were actually really good: a cross between British thrashers Bolt Thrower and Florida death-metal band Obituary.

I was disappointed to see that Celtic Frost were up next. Even though both Frost and Kreator were co-headlining I really expected Frost to play last (read: be the real headliners), but on reflection I think that the energy that Kreator brought to the stage after Celtic Frost’s bludgeoning sonic onslaught was a good balance. More on that in a moment.

I stood waiting for Celtic Frost to take the stage and found myself wondering what to expect. I’ve been listening to Celtic Frost since about 1985, and wanting to see them live for about as long. That’s 22 years of expectations. I decided to just let them be themselves (which, admittedly, was generous of me!).

Celtic Frost’s performance last night was an event. It felt like more than a simple concert. More than just four friends standing on a stage playing their tunes to a roomful of strangers. My Mum at this point might step in and ask “Tunes? They played ‘tunes’? If it’s not too rude, we’ll just ignore my Mum’s comments here and move on.

It was more than just listening to a band playing some of my favourite songs live. Their performance was an event. It was theatrical without being contrived or ham. They created for themselves a space, both physically and sonically, which they occupied and invited us into. I really don’t know how else to describe it. It is exactly the kind of space that Shakespearian director Peter Brook writes about in his book “The Empty Space”:

I am calling it the Holy Theatre for short, but it could be called The Theatre of the Invisible-Made-Visible: the notion that the stage is the place were the invisible can appear has a deep hold on our thoughts.

Guitarist/vocalist Thomas Gabriel Fischer (aka Tom G. Warrior) and bass player Martin Eric Ain (the two founders of Celtic Frost) commanded a presence on stage. Their personalities and confidence filled the stage, but in a way that wasn’t about their egos. There was a matter-of-factness about their being there but also, I felt, almost a humility, a willingness to be vulnerable and to take risks. (I could be wrong, but that’s how it came across to me.)

Before I left St Andrews that afternoon one of my colleagues asked me which song I’d really like them to play. I had a few (Circle of the Tyrants, Usurper, Jewel Throne) but my favourite song of theirs is from the latest album Monotheist, the third part of a their so-called triptych “Requiem”; the track is called Winter and is played entirely on strings (as in violin, viola, cello and double-bass). It’s the saddest — and most beautiful — piece of music that I’ve ever heard. (Think Inspector Morse soundtrack. But sadder.)

They played it. It’s that risk thing, again. Right at the end as they left the stage, having played Requiem in its entirety. Celtic Frost were always avant garde, that’s something I’ve always admired about them. Requiem is not an easy listen, and I respected Frost all the more for playing this live.

Celtic Frost isn’t a shallow, has-been band touring their hits from the mid-80s. This is a living, growing band who take risks and thankfully seem to keep winning against the odds.

Half an hour later Kreator took to the stage and ploughed into their set list was tempo. I probably have less to say about Kreator’s performance than Celtic Frost’s, which isn’t to diminish Kreator — they rocked — but I was still processing the Celtic Frost performance. Except to say that they used an overhead projector very effectively to project videos on a white screen behind the drummer while they played.

While Celtic Frost’s set had been largely slowed down (even from the recorded versions, which is unusual as bands tend to speed up when playing live) Kreator brought a new energy to the room. I’ve never before seen such as large, old school swirling mosh pit than last night during the Kreator set. In fact, at one point, I’m sure there was a double pit going on.

The two headliners had only 60 minutes each to play, as there was a curfew on at the Garage. Something to do with a club night going on afterwards, I think. The bands were as disappointed as the crowd, but critically didn’t disappoint the crowd.

An incredible night of extreme music, and another couple of bands ticked off on my list of “must see” bands. Next up, hmm … I’d like to see Candlemass, Danzig, Down, Exodus and Prong.