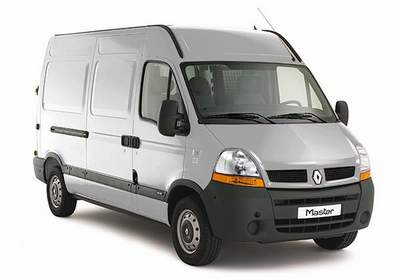 This morning Jane and I drove to Cupar to pick up Van #1, which was fine. Enterprise were polite, courteous and very helpful and in no time we were driving off towards St Andrews in a newly cleaned Renault Master similar to the one in the picture above, only our one is a long wheel base (LWB) model with a higher top. It is essentially a giant kite on wheels into which you can pile loads of stuff and transport it to wherever you wish.

We wish to transport it from the harbour area at Cellardyke to somewhere about a mile away. It’s now raining, there are no fewer than 4 vans and 2 cars almost blocking the road from our house to the harbour, and George Street has now been closed to traffic by the council. How convenient!

So the only route in and out is via East Forth Street, which is even narrower than George Street (which would have been the luxurious route). And on my way to the harbour when we arrived back with the van I met two vans, three cars and a bus!

I can tell already that this is going to be an adventurous couple of days, and that my reversing of LWB vans skills are going to improve rapidly. If it is your discipline, a few prayers for wisdom, guidance, safety and good weather would be gratefully received from all concerned in the removals operation. Oh, and energy. Thanks. 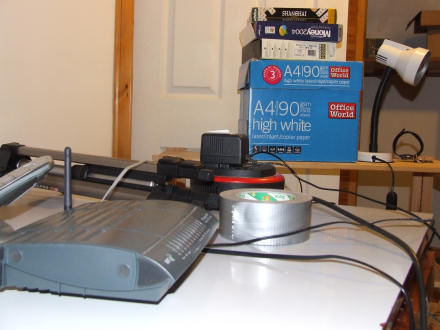 Well, I’m clearly not blogging from my main PC this evening. My desk is now bare, apart from my BT Voyager modem (CLEARLY my WiFi modem is going to be one of the final things to be packed!). So I’m in bed on my laptop making a final blog post from 3a.

Tomorrow morning Jane and I rent our first (of two) vans for part one of the move. On Saturday we have a team of 14 helping us with part two of the move from 3a to number 45, hence the equation for a title. (Neil will be so proud of my blog title!)

I look forward to blogging from our new house very soon. 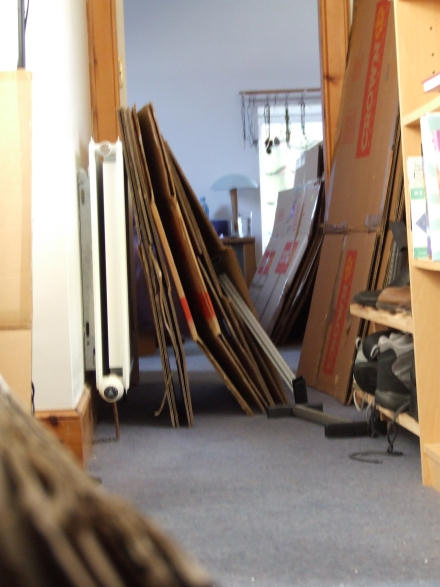 This is the bit that I’ve been dreading: the full scale packing has begun. For the next three weeks we’re going to be living with boxes. Boxes of belongings where there was once just belongings.

The house is slowly but surely turning into a store house for boxes. Boxes, boxes everywhere and not a box room in which to dump them.

I can’t stand disorder — why do you think I began an information architect? Why do you think that I unpacked all our books, videos and DVDs? It wasn’t just to save space, it was to save my sanity too! 😉

What on earth is going on with our mail just now?! First, it appears that Jane has been inadvertently ordained as we’ve started receiving mail addressed to “Rev Jane Saunders”.

Next, it would appear that whoever sent this envelope had no idea which town I live in. Or which case to use: UPPERCASE or lowercase? What the heck, let’s use BOTH! 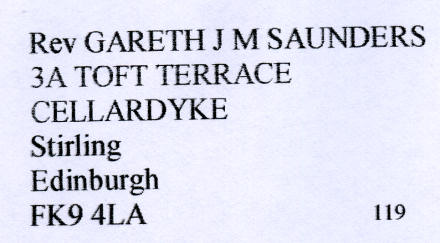 Since when was Cellardyke in Stirling? Since when was Stirling in Edinburgh?! And although I know that Stirling does have a Falkirk postcode (FK9) it does amuse me that the list of related towns on that address label is Cellardyke, Stirling, Edinburgh, Falkirk.

And who and where was this letter addressed to? 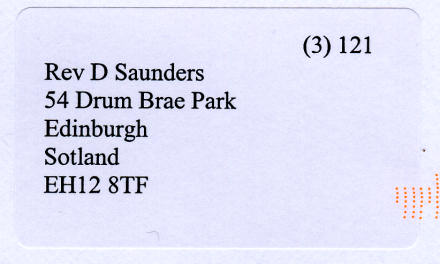 Who is “Rev D Saunders” — clearly a misreading of “Revd Saunders” (which is wrong anyway, as everyone knows that should be “The Revd Mr Saunders”).

And where is “Sotland”? 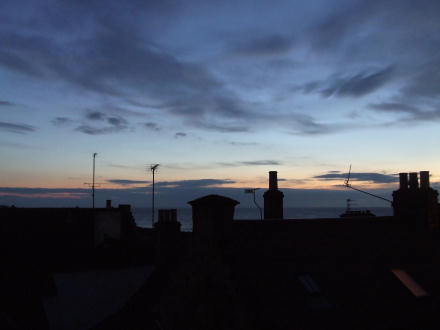 While you were asleep (probably, if you live in the UK) I was up early (05:45) and working on the final few edits and corrections to the first draft of the Teach Yourself Mahjong book which landed on my doorstep about a fortnight ago. So far I’ve only spotted about 15 corrections, which is not bad going.

As I read and pondered, composed sentences and rattled my fingers around on the computer keyboard, outside the sky gently turned from a deep black to this spectrum of reds, oranges and blues. I’m going to miss this view when we move to our new house next month; I’m going to miss hanging out of the Velux window in the roof at pointlessly-early o’clock taking pictures of the sea at dawn. Enjoy it now while you can.