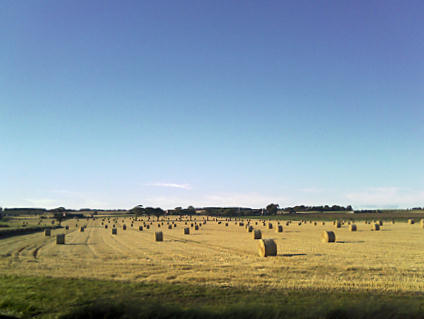 For some reason (ask a psychologist) each time I drive past fields of hay bales, or whatever the rolled-up variety are called, I’m reminded of the German war graves I saw in Belgium, near Ypres and Poperinge on a trip with Toc-H. Or scenes from films of Scottish battles; the bales are memorials, marking the locations where soldiers fell.

The Commonwealth cemeteries that I visited in Belgium in 1998 were neat and ordered, pristine, spotless and white. Everything that war is not. There was an odd feeling of triumph about them. This is a photo I took of Tyne Cot cemetery

The German military cemeteries that I visited had a very different feeling about them. This is a photograph from one that we visited: 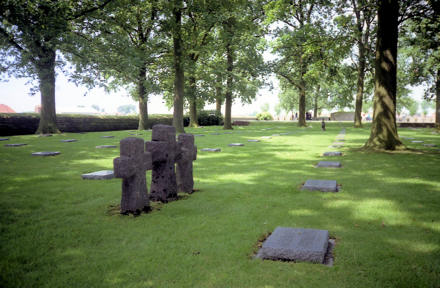 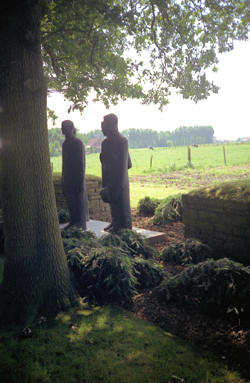 There was much less a feeling of imperial triumph, more a sense of mournful reflection.

There was a beautiful ‘humanness’ about it. The cemetery was shaded beneath trees, which gave it an organic feel that broke up any sense of order that the rows of gravestones — these were set into the ground — tried to dictate.

At the edge of the graveyard respectfully stood four stone figures, a reminder perhaps that these stones and the hundreds of names inscribed on wooden plaques mark the final resting places of fellow human beings. Not enemies, but brothers.

I remember reading the name of one soldier who was killed on 11 November 1915 — my birthday. That made it more real for me, somehow. And on the Menin Gate in Ypres reading the name “E Saunders” — that could have been my brother.

And for some reason, I’m reminded of that visit to the Ypres Salient in the spring of 1998 each field I pass at this time of year, whose hay bales are marking nothing more than where they were left.

But then maybe it’s appropriate given the number of dead mice that the cats have brought in these last two nights: it was five last night!

Maybe these are battlefields after all.

I didn’t get much sleep last night, despite going to bed early (before 22:00). You see, our cats, Spot and Smudge, appear to have founded an Ian Banks-inspired Mouse Factory.

During the night they brought in four mice. Well, okay, if you want to get technical about it: three and a half. In they’d bound, with a triumphant yowl: “Look what we’ve brought you!!” There’s a particular tone to the cats’ meows that lets us know that this is not just their usual “I’m back! … where are you?!” The Announcement Meow has a bite to it. Literally.

The farmers have been working with combine harvester machines in the fields to the back of our house, which I’m sure is scaring the field mice out of field and right into the clutches of our delighted and awaiting cats.

The final mouse was brought in around 07:00 this morning, and still alive, if bleeding slightly. I found it cowering in the corner of the living room, and chased the Smudge away. It looked half dead.

I thought I might have to put it out of its misery. (That was a euphemism for “kill it”.) But then it moved. It was still very much alive, albeit in shock.

I couldn’t do it. I’d already fetched a plastic bag and a heavy rock (shaped like a giant hedgehog) from the garden, but I couldn’t do it. I can kill (most) insects (but not spiders) quite readily. Mammals are different.

Jane and I were getting ready for an appointment at Ninewells Hospital in Dundee at 08:45 as part of our IVF preparations. Standing in the living room with this tiny creature in my hand I was vividly aware of both the wonder and fragility of life. 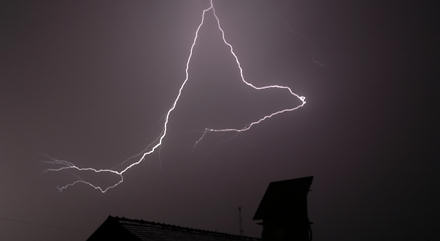 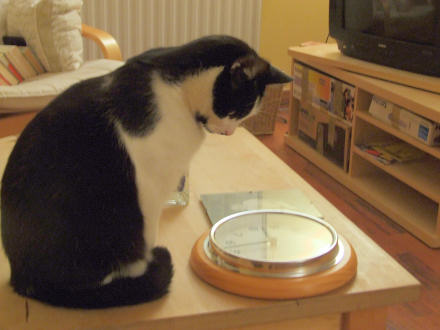 The other night dinner was interrupted briefly by the sound of Spot (the cat) pawing at something in the living room. We quietly poked our heads out of the dining room door to see Spot sitting on the coffee table intently watching the clock, and every now and then coiling up and leaping at the second hand as it ticked by. It was quite charming and quite hilarious. 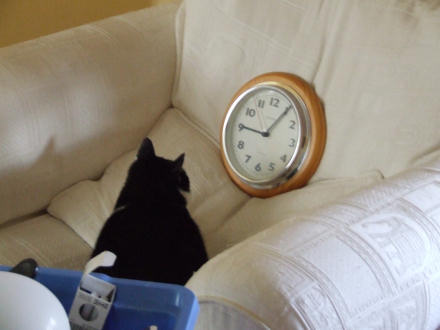 And it hasn’t stopped. This morning he was sitting for about 30 minutes on the armchair watching the second hand going round and round, and every now and then he’d try to attack it.

I need to get the washing machine up and running today. I suspect that Spot can’t wait. 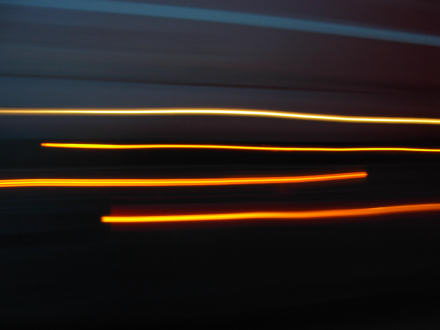 When I typed the word “slow” into stock.xchng this is what I got: an image of fast cars travelling at night!

At last things are improving at Saunders HQ, certainly in terms of my health. My dizziness has almost completely gone and yet I still seem to have about a month’s worth of anti-dizzy pills left, and I had to go back to the chemist today to collect my last seven tablets as they didn’t have enough when I filled my script on Friday (check me out with my pharmaceutical terms!). Are they like antibiotics, do I have to complete the course?

Late this morning I walked into Anstruther. I wanted to see how I was doing on the road to recovery but had to make do with the road to Anstruther! (Boom! boom!) I returned pretty worn out and slept for much of the afternoon. On my bean bag. On the floor in my study. I had intended to sit and read for a bit, and managed about a paragraph before dropping off.

During my amble into town I visited the Anstruther Post Office for the first time (most of these shops are closed when I return from work) and posted my Psion Series 7Book to POS with a kind letter asking them to wave their magic, technological wand over it and make it better. I now officially have never owned a Psion that I’ve not sent to POS to fix. (If that was too many double negatives for you: I have now sent every Psion I’ve ever owned to POS to fix.) I should be more careful in future.

The rest of my day has been spent:

and now I’m off to do that sleeping thing again.