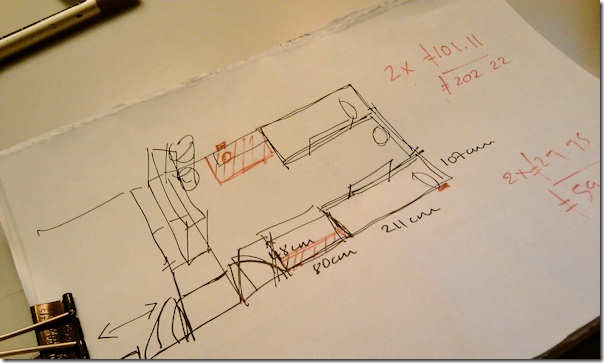 Rough sketch of how Reuben and Joshua’s room might be laid out with single beds.

This evening (Tuesday) Jane and I sat down to plan buying “big boy beds” for Reuben and Joshua. How can they be that old already?!

The bed rails are now ordered from Amazon and we’re planning a late-in-the-day trip to Ikea this week to pick up a couple of Malm single beds. Then they’ll need new duvets and duvet covers. Fireman Sam, anyone?

It’s all part of a cunning plan to get them used to sleeping in single beds before we go away on holiday next month.

Who you gonna call? Not me…!

A few years ago, around about the end of May 2006, I signed up for the Telephone Preference Service (TPS). I know that because I have a letter from them confirming that I had signed up for it.

“the official central opt out register on which you can record your preference not to receive unsolicited sales or marketing calls. It is a legal requirement that all organisations (including charities, voluntary organisations and political parties) do not make such calls to numbers registered on the TPS unless they have your consent to do so.”

Despite that we still get unsolicited sales calls from time to time, wrapped up in a cunning disguise to make them look like we’ve won a competition or money-off voucher for a new kitchen, bathroom or bedroom.

I got another one of those calls this evening, and I have to confess to have … well, see for yourself.

As professional sales calls go this one didn’t get off to a terribly good start.  When I picked up the phone the caller was in the middle of a chat with a colleague.  They were laughing about something.

I’d clearly taken her by surprise. But ever the professional she started to read from her script.

“Congratulations! You’ve been selected in a … blah blah blah … to receive an £850 voucher towards the cost of a new kitchen or bedroom.”

She ignored me and pressed on with her script.

“Can I ask you how old is your kitchen?”

“Your kitchen,” she said.

“A kitchen,” she said, her voice getting more animated now. “Surely you know what a kitchen is…”

And then she went to the trouble of trying to describe it for me.

“… A kitchen: a room with a sink and cupboards in it.”

“Hmm … no, sorry. I have no idea what you’re talking about.”

“Come on!” she said, “stop taking the mickey, everyone knows what a kitchen is.”

“I have … no … idea,” I said, sounding genuinely confused.

“Okay,” she continued, “then can you tell me how old your bedroom is?”

“No it’s not!” she said, quite forcefully.

“How can it be a personal question?” she challenged me.

“Well, I don’t phone up complete strangers and ask them how old their bedroom is! How rude!”

“Ahhh!” I said, sounding quite enlightened. “A VOUCHER!”

“What?!” she exploded. “I can’t believe that you’re turning down the opportunity for an £850 voucher for a new kitchen or bedroom.”

“Can you tell me how old the furniture in your bedroom is?”

“Well, can you tell me how old your kitchen is?”

I think she was trying to catch me out.  But how could she, had she forgotten, I don’t know what a kitchen is.

She then called for her manager, and I could hear her talking to him.  “This guy says that he doesn’t know what a kitchen is,” she said to him.

There was a pause while she handed me over to her manager, Dan.

“Hello sir,” he said, quite politely.

“Hello,” I replied, as is the custom.

“Are you having a good evening?” he asked.

“Erm, yes.  I was just trying to explain to your colleague,” I ventured, “that I wasn’t interested in your offer just now because we already have twins and have another baby on the way so we’re really not planning to upgrade our kitchen or bedrooms in the near future.”

“That’s fine,” he said. “I’m sorry about that, she must have been a bit slow to understand what you were saying.”

We seem to get these calls every couple of weeks.  The next time it happens I really need to take the company’s name so that I can contact the Telephone Preference Service and ask them to follow up the call to ascertain why we were being contacted.

In the meantime I’ll just continue to have fun.  The last time I got a call like this I just told them that we hadn’t had a kitchen since the explosion and that the insurance company was dealing with it.  The next time … any suggestions?  Leave them in the comments, if you like.

p.s. I do know what a kitchen is. We’ve got loads of them!