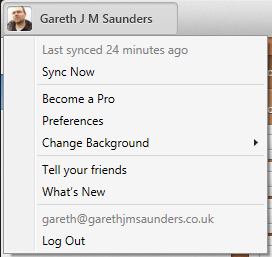 Back in April 2010 (was it really that long ago?) I wrote a post called Planning Study 2.0 showing how I was using a free online application called Floorplanner to work out whether it was feasible to move my study  from the former garage upstairs into bedroom four.

Then we discovered that we were expecting Isaac and those plans were put on hold. Bedroom four was to become Isaac’s room and my study would need to remain in the “garage room”.

Fast forward a couple of years and it became clear to us that Isaac was going to need a larger room. So Jane and I dusted down our plans and we decided to sacrifice the guest bedroom to move Isaac into, then the study would move into Isaac’s old room, and finally the garage room would become a second living room/lounge with the option of a sofa bed or inflatable double-mattress on the floor.

This was my initial plan from April 2010.

And so during the last couple of months we’ve slowly moved things around. Isaac moved rooms first of all, and then the study steadily moved upstairs. Bookcases and books first, then the filing cabinet and Ikea Poäng chair, and finally my desk (which I had to completely dismantle to get out through the former garage’s sliding door and back in through the front door).

So, here are the 3D renderings from Floorplan to compare with photographs of how the actual room looks.

Floorplanner has been a really useful tool. As I said in my initial review, the free account is limited to only one plan (although you can join rooms together to create, for example, a whole floor) but that has been enough for our requirements.

We are now beginning to use it to plan what to do with the old study (the “garage room”). How can we fit in a sofa or two, and still make it comfortable for guests to sleep in? I’ll report back once we’ve worked it out.

Ryan Singer at Future of Web Apps, London 2010 from Ryan Singer on Vimeo.

I’ve long been impressed with the quality, simplicity and focus of the web applications that emerge from US company 37signals. I’ve used Basecamp very successfully as a project collaboration tool on a couple of web projects.

If you’re interested in web design or web apps and you’ve not read either of their books Getting Real (US $25) or Rework (US $22) then you’re missing out, they contain some fabulous insights. If you don’t fancy forking out for them, Getting Real at least can be read online for free.

This is a talk that I’ve been meaning to blog about for ages. It was given by Ryan Singer of 37signals at the Future of Web Apps 2010 in London. Here’s what he says about the talk:

In this talk, I walk through the steps of creating a web app including modeling, sketching, HTML, Photoshop explorations, and moving from static mockups to live running code. Each step is illustrated with a real example, including some live sketching and live HTML. I also wanted to give a sense of how we think about apps at 37signals, as a stack of different levels that we can iterate on individually.

A few points that I got out of this: