This post could equally be entitled, “Making the world a better place, one pedantic letter at a time.”

I was watching ITV4 last week, catching up with footage of that day’s Tour de France action when an advert for Admiral car insurance came on. I was surprised when I saw the uniform of the woman portraying the character of the admiral.

I was not surprised by her gender: I am very much in favour of equal opportunities within the workplace, including the British armed forces. I was surprised simply by her uniform, and indeed by the rank depicted on her uniform.

Judging by the name of your company I can perhaps presume she was meant to be portraying an admiral (Nato code OF-9), it’s just that I cannot be entirely certain as she was wearing on her cuffs the insignia of a commander (Nato code OF-4).

To anyone with a passing knowledge of British naval ranks this will appear entirely incongruous and I expect will somewhat undermine the trust that one might otherwise place in your company: if you cannot even get the admiral’s rank correct on a pretend costume for a television commercial then how might we be expected to trust you in the more important matter of covering our cars against fire, theft, accident and other such maladies?

I am simply curious why such a decision was made to portray your admiral character as a commander, five ranks beneath an admiral. And whether you have any plans to correct this faux pas.

I look forward to hearing from you.

I posted the letter and then forgot about it.

About three weeks later, to my surprise, I received a reply from Admiral’s head of brand.

Here’s what it said:

Thank you for your letter regarding the Admiral’s uniform.

As you will have no doubt noticed the Admiral’s uniform is not an exact replica of an Admiral’s uniform, but was created to reflect the Admiral Brand Icon. That said, I do agree we made a mistake during the development and design on the jacket sleeve.

I’m also sorry to say that we produced all of our commercials for 2016 during one production shoot, so you will continue to see the current uniform until the end of the year.

However, I am pleased to tell you that we are in the planning stages of our next commercial, and I do intend to update the uniform to correct the number of stripes on the sleeve.

It’s good to get feedback from our customers, as this helps us evolve our campaigns for the future.

Fast forward eleven months and here is their new advert, which I first watched on ITV4 last week, while catching up with footage of that day’s Tour de France action.

And look! The Admiral admiral is now an admiral!

Obviously, I’m going to write to Admiral to thank them. It would be rude not to.

This evening I was reading an article by Giles Fraser on The Guardian website and I was intrigued to understand how they coded the drop-cap at the top of the article:

So being versed in the ways of the web developer I highlighted the letter, right-clicked and selected Inspect (I’m using Google Chrome, other browsers are also available). This opens a code inspector where you can poke around the HTML, CSS and JavaScript that builds a webpage, and it even allows you to edit it in situ to better understand how it all fits together.

I smiled when I saw, at the top of the HTML code, written in a comment in a combination of text and ASCII art:

Ever thought about joining us?
http://developers.theguardian.com/join-the-team.html

I love this inspirational Spanish advert from Ikea, which I spotted on the Creative Bloq website.

It ends with the Spanish phrase ‘Empieza algo nuevo’: start something new. 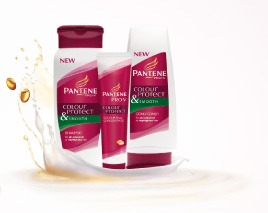 I saw an advert for Pantene that told me that their shampoo gives you “colour protection”. I’m going to be honest here. I have no idea what colour protection is in shampoo.

Are there some people whose hair turns monochrome unless they wash it in special shampoo?

I haven’t used an advert blocking add-on for my browsers until now, and I haven’t looked back.

In this month’s .net magazine regular journalist Gary Marshall has an article entitled “Shirt happens: When does object handling become outright harassment? Whenever you turn off your ad blocker…”

In the article Marshall described how when browsing from one site to another the adverts… well, followed him!

I’ve had the same experience. You know when you unconsciously just know that something’s not quite right?  I had that feeling while browsing the Web a couple of weeks ago.

I felt I was being spied on.

The ads are new, and they’re known as retargeting. Cookies track what you’ve looked at and follow you around the internet, shouting at you to look at them.

In theory, they’re supposed to offer extra inducements – “I see you looked at this shirt and decided not to buy it. How would you feel if I make it TWO POUNDS CHEAPER! Oh, mercy me, and here I am with a wife and three children to support” – but in practice it’s just the same things you’ve looked at, thrust in your face again and again and again. The implication is that you’re so utterly stupid, you’ll buy any old crap if you see it often enough.

The fact of the matter is that advertising works, and we really are gullible enough to see something on the telly, or glance at it in a magazine or newspaper, and race out to buy it believing that it will help us become happier, more content, more attractive, cool.  That’s just the way that we’re wired.

However, these days Jane and I don’t tend to watch much live TV any more.  With BT Vision we record most of the programmes we want to watch, and then fast-forward through the adverts.

When listening to the digital music service Spotify I realised the other day that I completely switch off during the adverts.  I stop listening, or distract myself with something else.

It’s not a conscious thing.  I found myself, the other day, thinking it odd that there had been no adverts while I was listening.  And yet I suddenly realised there was an advert playing right now!

I’d just tuned it out.

The same kind of life skill that I see Reuben and Joshua are learning even at the ripe age of two when we tell them that it’s time for bed.

I object to adverts on my clothing. I don’t really like wearing rugby shirts that advertise whisky or stout, because I don’t drink.  Why should I be a free advert for alcohol?

I do notice adverts in magazines, though.

I get a lot of emails inviting me to add ads to my blog or website. I always say no.  Well, not always, I sometimes write back … but that’s another story for another day.

I always say no because, although they could potentially raise a couple of hundred quid a year adverts on blogs just annoy me so I presume that they will annoy other people too.

Besides, I’d have no control over what was being advertised on my website.

So … no adverts now or ever on this blog, folks.

Once I’d read Gary Marshall’s article I fired up my PC and installed AdBlock Plus for Google Chrome and AdBlock Plus for Mozilla Firefox.  A couple of tweaks later (to let me watch YouTube videos) and I was off…

I’ve not had a single annoying advert since, and to be honest I really don’t miss them.

Of course, the irony of seeing a piece of software advertised in a magazine which led me to immediately downloading and installing it there and then hasn’t passed me by.