This year I added 58 new releases to my collection, compared with 32 last year. So, 2018 was definitely a better year for me in terms of the number of new releases acquired. Many of these were as promos from bands, record companies or promotion agents—many thanks if you’ve sent me something to review on my 195 metal CDs blog.

Before launching into my top 10 though, I’ve just taken a look at my Last.fm top 15 artists over the last 12 months. This reflects what I’ve actually been listening to over the last year: at home, at work, and on my Android phone.

Seemingly, I listened to…

So, I listened to less music overall. Given the year I’ve had, this does not surprise me.

It’s quite clear from the chart above that I’ve had a bit of a Seal binge this year. What is most remarkable is that most of that was during December alone.

Queen went up one place compared with last year, not doubt because the Bohemian Rhapsody film was released and I was revising for it. And similarly this was the year of Slayer’s farewell world tour which I caught in Glasgow in November.

The only artist from my 195 metal CDs project to appear in the top 15 is Manes, whose latest release I gave 100%, so that doesn’t surprise me. Devilfire appears at number 15 because that was the album that I couldn’t quite get around to reviewing, so I’d listen to it, get distracted and then need to listen to it again. Repeatedly.

Before I get to my top 10 for this year, a few honourable mentions.

I really wanted to love the new Machine Head album. Their last few albums have been fantastic, making my top tens in 2014 and 2016. But, for some reason, this album just didn’t hit the spot for me.

There are some splendid new releases there, though, from up and coming bands, which is great to see.

They say you shouldn’t judge a book by its cover, and they are absolutely right. When I first looked at it, I assumed that this would be some second-rate power metal release in the vein of HammerFall. Oh, how wrong I was.

This is just brilliant! It is entertaining, it is amusing, it is played beautifully and with such conviction. This album is the perfect antidote to the madness in the world right now, and I love it.

If you enjoy Devin Townsend’s projects, then I fully expect you to enjoy this. If you have even a fleeting interest in prog or black metal or thrash or simply want to support fabulous British bands, then I implore you to check out this album. Find a space, plug in your headphones and listen to this album for the next 48 minutes. You will not be disappointed.

I know this is not the greatest album in the world; it is not the most original. But damn! it is great, great fun. And for that I have to give it full marks. It really has made my week (that and being offered a new job… but obviously, mostly this).

Fish’s latest EP A Parley with Angels released in September, shortly before I saw him in concert in Edinburgh’s Queen’s Hall, gave us all a brief glimpse into some of the songs that will eventually appear on his next (and reportedly last) album Weltschmerz.

The EP contains three new songs: “Man with a stick”, “Waverley steps” and “Little man what now?” which together clocks up more than 30 minutes of new music. The remaining four songs are live offerings of “Circle line”, “State of mind”, “Emperor’s song” and “Voyeur”.

This EP sat as a permanent fixture in the CD player in my bedroom for about a month.

The new songs are in keeping with his last few albums, co-written with Steve Vantsis and Robin Boult. More of this please. 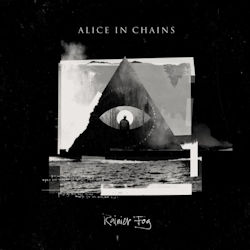 I bought my first Alice in Chains album in Berkeley, California on a break from a choir rehearsal and I’ve loved them ever since. So it comes as no surprise to find them making my top 10 this year.

Obviously, I miss the late Laney Staley (1967–2002) but this is the third album with lead vocalist and guitarist William DuVall and it’s as sublime and gorgeous as you would expect with dark melodies and Jerry Cantrell’s haunting harmonies.

7. A Perfect Circle—Eat the Elephant

Ah… the long awaited follow up to 2004’s eMOTIVE finally dropped on our stereos this year and what an album.

A Perfect Circle have always been on the more mellow side of Maynard James Keenan’s output, contrasting a little with Tool’s heavier, more twisted and convoluted melodies. And this is no different.

Eat the Elephant was an album that connected with me as soon as I listened to it. It is sublime. Where it hits you, though, is in the lyrics which are sharp and speak very much to where we have reached in western culture towards the end of the first decade of the 21st century.

This is an album that I’ve not yet reviewed for 195 metal CDs, but it will appear in the new year. It’s been a guilty pleasure for the last few months. Musically, Seething Akira fall somewhere between The Prodigy, Depeche Mode and Senser. Their music is energetic, demanding and very ‘street’.

This is a gorgeous album that has only whetted my appetite to listen now to their previous six albums. I can see this becoming  one of my favourite albums of the year, and a firm favourite to write or code to; my current favourite is Godflesh—Streetcleaner (1988).

This album has everything I want from an album—depth, emotion, crushing riffs and soaring melodies. There are elements of industrial metal, doom and electronica, wrapped in a melancholic, plodding groove. I love it.

As the press release says, this isn’t a record to listen to, it’s one to surrender to.

This is a near-perfect debut EP. I truly hope Thuum get the attention they deserve. Thuum are firmly lodged in the doom, sludge, southern-groove genre and they own it. Within four tracks Thuum manage to say more and generate more excitement than many bands with two or three times as many tracks.

This is precision crafted doom/sludge metal from the deep south (of England). I want to hear more. If through smoke, comes fire, I want to see what truly happens when the fire takes hold. Definitely a band to take notice of and follow over the next few years.

The last recording I heard from Manes was [view] extended play (2006) which I described at the time as ‘curious ‘. Not exactly a glowing report but I did give them 85%, so I must have thought they had something going for them.

This time around, though—holy moly!—Manes has excelled themselves. This is an album that I just can’t stop listening to.

A quick catch-up for the uninitiated, Manes started life as a Norwegian black metal band in the 1990s—an obligatory starting point for any rock band in Scandinavia—who evolved into what Wikipedia describes as “a hybrid of jazz, trip hop, electronica and metal with clean sung vocals and many progressive overtones.”

This is an album that I have come back to again and again. Surely it can’t be that good, can it? And then I listen and I hear something new, and it tightens its grip around my heart. I love this album.

While I said in my review that this was a strong contender for my album of the year, I’ve placed it at number three which is still pretty good—this year nothing came close to the beauty, delicacy, power and emotion of this record.

I love almost everything that Max Cavalera puts out, whether it’s early Sepultura, Soulfly, Cavalera Conspiracy or any of his endless side projects. There is a power and depth to his music and lyrics that speak to me on a spiritual level and this album is no different.

If I’m honest, the last couple of Soulfly releases—Archangel (2015) and Savages (2013)—I found a little ‘stock’ as Lars Ulrich might put it; a bit ‘metal by numbers’. But Cavalera seems to have unlocked a sense of urgency in his writing again. This album is exciting even if his mandatory and sequentially numbered instrumental, “Soulfly XI”, sounds like Metallica’s “One” meets Kenny G.

When I first really got into music—and for me in the mid-80s that meant metal, and specifically thrash metal—the first bands I listened to were Queen, Slayer, Metallica and Voïvod, the French-speaking Canadian experimental thrash band from Jonquière in Quebec.

This album sat in the stereo in my bedroom for months, played on repeat. I fell asleep to it, I woke to it, I got dressed to it. I drove in my car to it.

That’s the reason it doesn’t appear higher on my Last.fm chart—I was playing it old school with an actual compact disc.

This has everything you’d want from a Voïvod album—punishing riffs, twisted melodies, dark harmonies, weird sci-fi lyrics and a red and black album cover drawn by Away.