Here’s an odd dialog box I spotted the other day. I had just run MySQL Workbench 5.x for the first time in a few months (I tend to use Navicat Premium Essentials these days) and it ran a quick check to see if the software was up-to-date. It wasn’t and presented me with this dialog box:

So, which button should I press to get the update?

And then I’m presented with two options: OK and Get it Now.

My train of thought was: it says I can download it from this URL, so okay I want to download it.

The dialog box closed and nothing else happened.

What?! What just happened there. I thought I had just said that I wanted to get the new version. I clicked OK but it did what I would expect a cancel button would do. But that’s cancel! There is already a cancel button. And there is also a red [x] button in the top right-hand of the dialog box which also cancels the dialog box.

That’s THREE different ways to cancel the dialog box. But they are offering me an upgrade, to make the software better, so why not make that the most obvious, easiest to select option?

Surely this would be a better dialog box:

Now it’s simply telling me that MySQL Workbench 6.0.6 has been released, where I can download the latest version if I want to do it independently of this dialog, and now there is only one, clear call to action: Get it Now.

I wrote a joke at work:

I once worked on a project to build a time-machine. But my boss was a nightmare: he always wanted everything to be done yesterday.

Over the last few years I’ve had a second blog called Another Potting Shed, hosted on WordPress.com. This morning I migrated all my posts from it into this blog, and it’s currently just a holding site until I figure out what I want to use it for.

I’ve never been entirely clear about the purpose of this second blog, and to be honest I only started it so that I could have a WordPress.com account and check out what was going on there. In the meantime my main blogging will take place here and I achieve some clarity.

I’m already feeling happier about the situation. Perhaps it’s simply because I’ve made a decision and have done something about it; I’ve been pondering this for months.

My other blogs all have particular themes:

Just over a year ago D. Randall (‘Randy’) Blythe, the singer in American metal band Lamb of God was arrested, charged and remanded in custody in the Czech Republic over an incident that had happened during a Lamb of God concert in Prague in 2010; that incident had resulted in the death of a 19 year old fan Daniel Nosek.

Earlier this year Randy Blythe was acquitted of the responsibility for Mr Nosek’s death, a decision that has subsequently been upheld by the Prague High Court.

Yesterday he released a short film that he had made during his trial. This is what Randy wrote on his blog about the film:

My idea was to show my mind set through film and music during the process of my trial, and have a more ambiguous ending heading into my final day in court. I did not know what was going to happen to me, only that I felt I was doing the right thing by being there. Working in a creative capacity during the trial helped me to remain calm- it is what I know how to do, so I wanted to share it with people.

It’s a thoughtful and thought-provoking film. There is a beauty to it, but also a sadness. It ends with the words, “Rest in peace, Daniel”.

I have a lot of respect for D. Randall Blythe, a lot of respect—and I’m looking forward to his book coming out early next year (2014) which documents his time in prison. 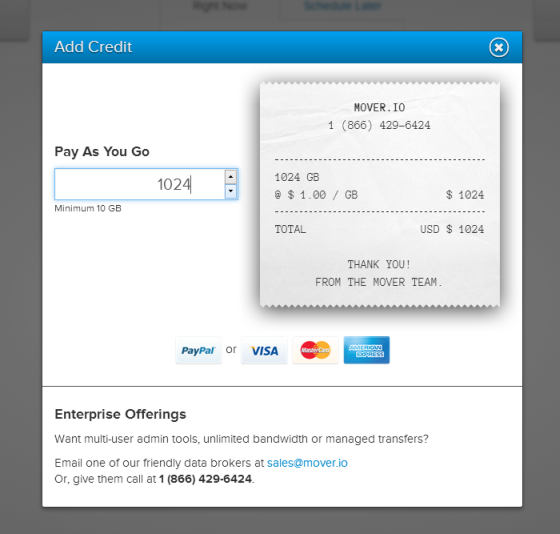 While using Mover earlier this week—an online service for transferring files from one cloud storage host to another—I investigated how much it would cost to buy extra bandwidth (the first 10 GB is free).

How did I know that? Check out their user interface. I love it! It’s been styled like a store till receipt: a perfect example of using a real-world example in an online environment to immediately communicate meaning.

I love their attention to detail too, right down to the crinkled paper effect in the top left corner. Good work Mover team!