END_OF_DOCUMENT_TOKEN_TO_BE_REPLACED

What do you mean you don’t know what an ident is? Are you like one of these people who has friends and goes out, and stuff?

Anyway, come back after you’ve read up all about station idents on Wikipedia… That was interesting wasn’t it. They sure mentioned ‘FCC’ a lot, didn’t they.

My colleague @stepreo (not his real name, obviously) showed me this Christmas ident created by Treat Studios for E4. It’s called ‘Reindeer’ and has to be one of the most amazing 6 seconds of animation in the history of ever.

I first encountered the writings of English writer, poet and academic JRR Tolkien, as I suspect many other teenagers did in the early 80s, when I received a copy of The Hobbit for the Commodore 64 back in 1983.

My copy of the computer game (on cassette) came bundled with a copy of the novel. I still have it—it’s a rather loose-leaf copy now; it has a cover price of £1.50. The game cost £14.95, which was more than twice the price of an average music album in those days, and took around 30 minutes to load.

As an aside, as I’m sure many other are, I’m keenly looking forward to seeing The Hobbit in the cinema next December.

It wasn’t until nine years later, in my final year at the University of St Andrews, that I discovered The Lord of the Rings, and years after that The Silmarillion, Unfinished Tales, and various other collections of his works documenting the history of Middle Earth.

The Hunt for Gollum

The Hunt for Gollum is a British fan-made, unofficial prequel to The Lord of the Rings film trilogy that documents Aragorn’s quest to find Gollum. And it’s really rather good, for a film shot in high-definition video on a budget of GBP £3,000.

The story takes place 17 years after Bilbo’s eleventy-first birthday party following Gandalf the Grey’s investigations into the original of the One Ring and he fears that Gollum will reveal information to the Dark Lord Sauron about Bilbo Baggins.

The film lasts just under 40 minutes.

Ryan Singer at Future of Web Apps, London 2010 from Ryan Singer on Vimeo.

I’ve long been impressed with the quality, simplicity and focus of the web applications that emerge from US company 37signals. I’ve used Basecamp very successfully as a project collaboration tool on a couple of web projects.

If you’re interested in web design or web apps and you’ve not read either of their books Getting Real (US $25) or Rework (US $22) then you’re missing out, they contain some fabulous insights. If you don’t fancy forking out for them, Getting Real at least can be read online for free.

This is a talk that I’ve been meaning to blog about for ages. It was given by Ryan Singer of 37signals at the Future of Web Apps 2010 in London. Here’s what he says about the talk:

In this talk, I walk through the steps of creating a web app including modeling, sketching, HTML, Photoshop explorations, and moving from static mockups to live running code. Each step is illustrated with a real example, including some live sketching and live HTML. I also wanted to give a sense of how we think about apps at 37signals, as a stack of different levels that we can iterate on individually.

A few points that I got out of this: 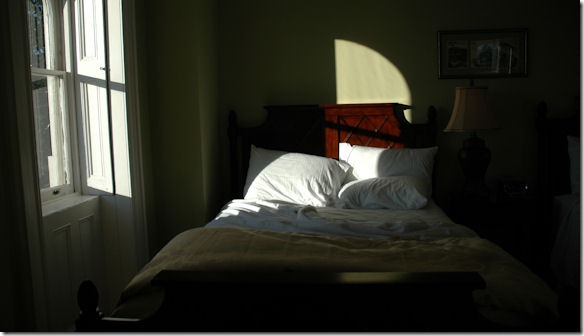 Thank the Lord for grandparents who live only five minutes’ down the road, and who can take all three children at the drop of a hat.

Jane and I spent most of today in bed asleep, fighting some kind of fleeting, flu-like tummy bug. We ached all over: eyes, joints…everywhere! I felt very, very nauseous. I had a bucket beside my bed—it was that serious.

Reuben, Joshua and Isaac were delivered back to the sick-house just before 6pm, as Jane and emerged from our half-day hibernation.

I’m still feeling quite fragile, but a couple of glasses of Coca Cola have really helped with the nausea. I just hope I can sleep tonight, though. Now, that would be ironic.