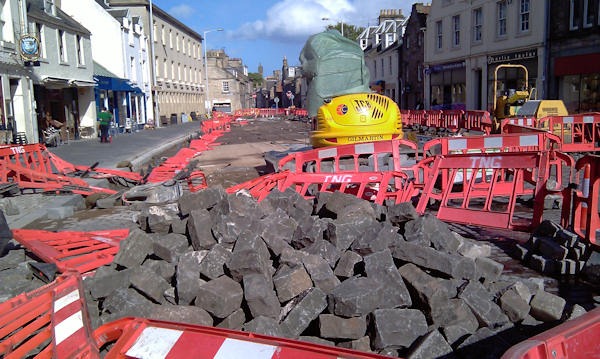 This is what the east end of Market Street in St Andrews looked like this evening. The road is being levelled, the cobbles are being renewed and the wind has blown down most of the barriers on the north side of the street.

30 day song challenge day 23: A song that you want to play at your wedding

The first thing to point out is that I’m already married. Jane and I got married on Sunday 25 July 1999, nearly 12 years ago.

I played guitar, Jane sang, my mate Jonny played keyboards, my brother Eddie was on bass guitar and his friends Iain and Brian played guitar and drums respectively. We had such good fun!

I’d always wanted to play in a band at my own wedding reception, so that’s exactly what we did! Our set list included Nothing Else Matters by Metallica, Iris by Goo Goo Dolls, Brown Eyed Girl by Van Morrison, Angels by Robbie Williams and La Bamba (in Spanish and English, with actions) made popular by Ritchie Valens.