“The most true-to-life military game ever created.”

This is why I love The Onion.

Probably about a year ago I moved from using Mozilla Firefox as my number 1 browser to using Google Chrome.

I didn’t mean to switch from Firefox. I’d been a huge fan of Firefox since before version 1.0 was released. Hey! I even contributed financially to Mozilla’s appeal to raise money for the launch and my name was published with thousands of others in a full-page advert in the NYTimes in December 2004.

But Google Chrome was just so fast.

It started quickly (more quickly than Opera), it rendered Web pages quickly and being built on the WebKit engine it supported Web standards well and supported the latest HTML5 and CSS3 developments.

But since upgrading to Google Chrome 10 (and 10 beta) I’ve had nothing but trouble with the Adobe Shockwave Flash plugin crashing every few websites.  Since Chrome 5 (released in June 2010) the Flash plugin now comes built-in to the browser, rather than relying on the separate plugin installation that Firefox, Opera and Internet Explorer use.

It seems that I’m not the only person to experience this, which comes as something of a relief to me. There is currently a discussion on the Google Chrome help forum entitled ‘Chrome 10 – Flash Crashes’ which is making for an interesting read.

One suggested fix/workaround is this:

I’ve been running this workaround all evening and as yet haven’t experienced a crash.

I’ll be watching this issue very closely… who knows, I may be moving to Opera 11.1 for a while very shortly.

Tuesday 15 March: that workaround didn’t last. Shockwave Flash has been crashing again this evening. So I’ve just re-enabled it, if that’s not going to do anything.

Wednesday 16 March: I’ve now updated to the Dev channel as someone said that version 11.0.696.12 dev was working fine for him without Flash crashing. 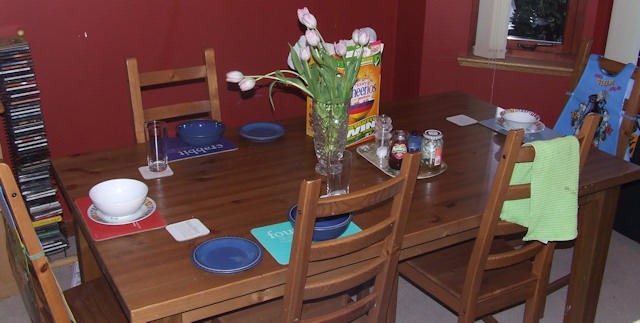 Do you see what I see? This is a photograph of our dining room, taken at 06:36 this morning.

Reuben and Joshua ‘helped’ clean the two Ikea Antilop highchairs and put them up into the attic last night. It’s nice to get our dining room back

We invited Reuben and Joshua to choose which seats they would like, hoping that they’d chose the seats next to Jane and me (in this photo I have the blue ‘crabbit’ placemat, Jane has the turquoise ‘fouter’ one). But no, they wanted to be lords of the manor and sit at opposite ends of the length of the dining room table!

Ah! they grow up so quickly.