I’m in the process of moving Web servers on my main website and blog: www.garethjmsaunders.co.uk, from a really old hosting account at Webfusion to a new shiny one with Heart Internet.

I’ll write more about why I’m moving at a later date, in the meantime simply know that there may be a little disruption to the website and blog (as well as to my email) over the next 24-48 hours while nameservers and DNS settings are updated.

I’ve been meaning to upgrade my hosting account for months, which is actually one of the reasons why I’ve not been blogging quite as much as I’d have liked. “I’ll write about that after I’ve moved servers,” I’ve thought and then postponed the move because something else got in the way. In the end, last week I decided to just do it!

I’ll see you on the other side.

I installed Windows 7 Professional (32-bit) on my main desktop PC the other week, having been using the Release Candidate on and off on both my main PC and one of our laptops for a good few months.

I’ve now installed it on one desktop and two laptops and each time the process was simplicity itself. The installer correctly identified all my hardware and installed the latest drivers for everything (apart from my Creative X-Fi soundcard the drivers for which I installed myself). From start to finish in less than an hour is pretty impressive.

However, despite the shiny finish and the months of beta testing by the public there are still a few rough edges, which will be hopefully corrected in a forthcoming upgrade. Like this typo in the Windows 7 Sync Center (sic): 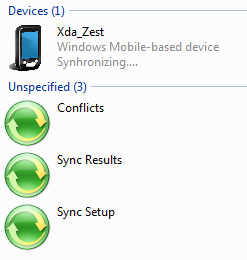