About 3-4 weeks ago my beloved O2 Xda Orbit phone started to act erratically, randomly switching itself off according to its own unfathomable set of rules. It was okay when plugged in, but it was getting increasingly impractical pulling an extension cable along Market Street when I went out for lunch.

I figured that resetting the Xda Orbit to factory settings was what it needed and spent an evening reinstalling everything. To no avail. It would still randomly switch itself o…

I put up with it over a weekend and telephoned O2 the following Monday morning and ordered a very similar device, the O2 Xda Zest; a rebranded Asus Crystal.

There was so much that I liked about the Xda Orbit: the built-in GPS, WiFi, GPRS Web browsing, FM radio and I could synchronize it with my PCs at both home and work. The Xda Zest seemed to offer much the same, only with a much improved screen (proper VGA 480 x 640 pixels) and a much, much faster CPU.

Except the FM radio.

And, as I discovered to my cost, synchronizing with two PCs!

You see, I naively followed the assumption that the next version of something would be a little better than the previous version of that something. That’s how advertising has reeled me in so often during these last 30+ years.

Isn’t that how it usually works?

Seemingly no-one told the Windows Mobile team that. Because it seems that there was a fundamental flaw in Windows Mobile 6.1: it wouldn’t synchronize with two PCs! Even though that’s one of its key features.

Which seems a bit like buying a new car, getting it home and discovering that it drives on A-roads but not your local streets. You can use it at work, but not at home.

Getting Nothing Done (GND)

Which for many people wouldn’t be a problem, but for the last 3 years that’s been the backbone of my organization system. No matter where I’ve been, at work, at home, out-and-about, I’ve always had a full picture of my appointments, commitments, contacts, tasks and priorities.

When I worked from home, in the parish, things were in many ways easier: I had one PC with which I synchronized my Psion 5mx. It was an almost flawless system. But the introduction of a second base, my office, added a new level of complexity. Windows Mobile 6.0 (just about) handled it admirably using ActiveSync (though quite often more correctly spelled ‘ActiveSink’!). Windows Mobile 6.1, however, has let me down quite spectacularly. And not just me, as a quick Web search will prove.

For the last 3 weeks or so, however, I’ve been at sixes and sevens. Thankfully, because I’ve been backing up my Outlook PST files more often than usual, I’ve not actually lost any data but on more than one occasion I’ve ended up with a lot (a LOT) of duplicated data which is just as time-consuming to deal with.

And all the while not entirely sure of the whole picture of my life, which is rather unsettling for someone who is usually so on top of things.

So where do I go now? How do I recover my sense of being-on-top-of-things?

Sync my Psion with both

I tried that, but again the Psion wasn’t really designed to be synchronized with more than one PC. I get errors, so have to re-sync from scratch and end up either duplicating data or reintroducing data that I’ve already deleted on one of the platforms.

I’m going to try out XTNDConnect PC to synchronize Outlook with Google Calendar and see how that works; I’ve already tried it synchronizing Outlook with Windows Mobile 6.1 but it duplicated everything!

Outlook 2007 will allow me to subscribe to an iCalendar feed, such as that offered by Google Calendar, which is great for when I’m at my desktop — but what about when I’m out-and-about with my my phone (or Psion)?

I then tried Remember the Milk to synchronize my Windows Mobile Pocket Outlook tasks with this online task application. But I have over 100 tasks and it didn’t copy over the categories. One “inbox” task list of 120 tasks really wasn’t useful.

At the moment I’m currently synchronizing both work and home calendars with different Agenda files on my Psion. It’s not ideal but at least I still have all my data in one place.

I have also been considering buying a hosted Microsoft Exchange account. That way—I guess— I could access all my data from work, home or on the move on my phone or via the Web. But I don’t have any experience of Exchange so would welcome people’s comments/thoughts.

It’s been a frustrating time, but I am willing to move on and use something else … I’ve just not found the right solution yet.

In the end, I opted for a hosted Microsoft Exchange account from Simply Mail Solutions. Everything then synchronised with the single source of truth: the Exchange server, no more trying to work out which entry was the most important.

This evening — while I should have been cycling around the back roads of the East Neuk of Fife or repeatedly lifting moulded discs of iron — I instead sat in front of my main desktop PC, booted into the Windows 7 partition and began to familiarize myself with it a little more.

To be fair, I was trying to fend off a chest infection.

For the last few weeks we’ve been running the laptop on Windows 7 exclusively. But on my main PC the primary partition is still running XP and I’ve only booted into it every now and then, when time has offorded me that luxury.

Microsoft are clearly encouraging folks to upgrade to the new operating system as soon as possible. And I don’t blame them, from what I’ve seen of Windows 7 so far it’s well worth even the full price.

With October only three months away I reckoned that it was about time that I begin to make sure that all of my vital software works okay in Windows 7.

Installing Windows 7 on the Lenovo laptop was a breeze. I had already upgraded the RAM to 2GB (from 512MB) and stuck in a larger 160GB hard drive (from 40GB) so it was simply a case of running the installation DVD and seeing what it would make of my not-exactly-cutting-edge hardware.

The bulk of the installation was finished within about 20 minutes.

Windows 7 found drivers for almost all my hardware, prompted me for the WEP key to connect to the WiFi and discovered my Windows XP network workgroup. It was an almost faultless experience.

Moreover when Windows 7 couldn’t find any newer drivers for the integrated soundcard and trackpad it happily accepted the Windows XP drivers. Astounding!

It means that the installation process should be a pretty straightforward and effortless affair for even the most inexperienced PC user, since Microsoft aren’t offering an upgrade option in Europe and so anyone wanting Windows 7 will need to backup their PC, wipe it clean and install Windows 7 afresh … which is not a bad way to go, in my opinion.

The first installation casualty was Adobe Acrobat 7. I simply can’t get it to work within Windows 7 so have resorted to the freeware PDF Creator from SourceForge.

The second was UltraMon … that is until this week. UltraMon is one of my must-have applications for working with multiple-monitor setups.

UltraMon manages wallpaper, desktop icons, stretches the taskbar across all your monitors and adds really handy ‘send to other monitor’ and ‘stretch across all monitors’ buttons next to the minimize, maximize and close buttons in the top right-hand corner of each window.

Until now the XP/Vista edition hasn’t worked with Windows 7, but version 3.0.6 brings with it Windows 7 support. And I’m relieved to report that I’m impressed.

The evaluation continues, but I can’t immediately see anything that I’ll be terribly disappointed with (except perhaps the absence of an ‘Up’ button on the Explorer toolbar!) As I tweeted a few minutes ago: “Windows 7 feels like the kind of OS where you can simply focus on getting things done.”

This is something I come across quite often in my job, when I ask people what browser they use. A lot of people genuinely don’t know. The most recent answers I had were: “Windows?” and “I’ve got Office, is that it?”

What is a browser?

For those who’re unsure, a browser — or a Web browser — is the program you use to view Web pages.

It’s likely what you’re using right now to read this blog (apart from you geeks using an RSS feed reader … but that’s a whole other ballpark of worms that I’m not going to get into right now!).

Right now, why not go to the Help option on your toolbar and click on the About option. That’ll tell you the browser that you’re using (or whatever other application you’re reading this from!).

Mine says that I’m using Mozilla Firefox 3.5. Go me! 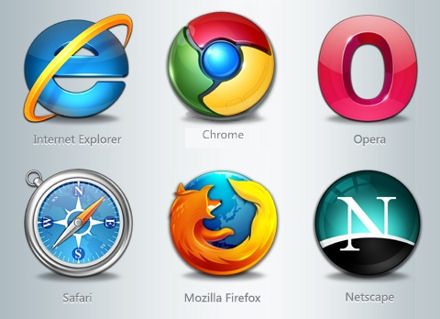 Most people using Windows will have some version of Microsoft Internet Explorer installed by default; but not after October if you buy a new PC with Windows 7 installed. But there are loads of other ‘flavours’ of browser:

Each browser claims to do things better than the next: load pages quicker, run code faster, adhere to Web standards better. I certainly recommend you check out some of those other browsers. Why not start with those 4 above?