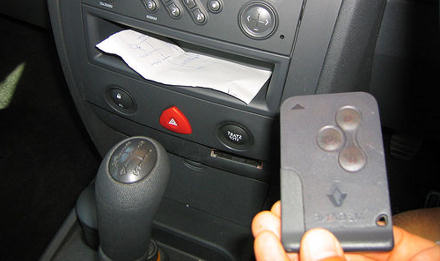 Renault key card for Mégane — and yes, the image is mirrored because the original was from a left-hand drive car!

A couple of days ago I did something I’ve never done before, and I’m not really proud of this: I lost a car key; an expensive car key too.

Jane has a Renault Mégane Sport Tourer (the estate version) which has a magic key-card system for locking, unlocking and starting the car.

For my Vauxhall Astra I’ve got a button on the key that will lock and unlock the car from a distance. As I approach the car I press the button and CLUNK! the car magically unlocks. You’ve probably got something similar on your car too.

Well, Jane’s key-card is even more impressive than that. You don’t even need to press the button, you just need to have it somewhere on your person and using magic the car senses that you are in the immediate vicinity and the doors unlock when you pop your hand into the handle to open the door.

And it doesn’t stop there!

You don’t even have to slide the key-card into its slot for the engine to start. When you press the START/STOP button the key-card just has to be somewhere inside the car.

Or on the roof, as I discovered.

In fact, lets say that you accidentally left the key-card on the roof and then drove off to … well, an example might be to St Andrews, and while negotiating a right-turn at a roundabout, lets say on the A917, the key-card calmly slid off the roof. What would happen then?

In that situation you might expect the car to make a bit of a fuss about it. You might expect that it sounds an alarm. Or the lights flash a bit. Or the engine comes to an abrupt stop even … although that would be a dangerous option, thinking about it.

But no, it didn’t. The first I knew that something was amiss was when I pulled into a parking space on North Street in St Andrews and was politely invited to press the START/STOP button twice to confirm that I did indeed wish to stop the engine.

“Hmm … that’s a bit odd,” I thought to myself while obliging the car’s seemingly random whim. A few minutes later it all became clear.

So there I was standing beside the car frantically and fruitlessly checking every pocket. Passers-by might have been forgiven for thinking that I was on fire. The anger that I was directing at myself certainly was. I sat back in the car, pressed the START/STOP button and … “Card not detected” flashed the message on the dashboard.

I phoned Jane. There was panic in my voice. “I’ve lost the key-card!”

Calmly?! This was no time for calm. She clearly didn’t understand the severity of the situation. This was clearly a time for swearing. This was exactly the kind of situation that swearing was invented for.

“THE KEY-CARD!” I said louder, using the same logic that British tourists have employed for years while abroad, that if you say things loud enough people will be forced to understand. “THE KEY-CARD! THE FECKIN’ KEY-CARD!”

Swearing didn’t help Jane understand any quicker, but I like to think that it helped prevent me from crying. At least at that point in the conversation!

Thankfully Jane’s mum and sister had just arrived at our house so they took over Operation Twins Feed and Jane jumped into my car and drove the 10 miles as quickly and safely as she could to St Andrews to deliver me her key-card, while I stood guard and rehearsed over and over how this could possibly have happened. This is not the sort of thing I do.

The simple answer is that it happened because I was over-tired. But at the time, that didn’t seem quite enough to justify losing an £80 key-card. I was really angry with myself.

But thankfully I had scripture to hand to help me. In the New Testament there is more than one parable about losing things and finding them.

When I got back — I’d gone to St Andrews, by the way, to get emergency supplies of nappies and infant formula — I parked on our drive, got out my torch and went searching. I retraced the route on foot, scouring every inch of the road and pavement. In the dark.

I reasoned that if I’d left the key-card on top of the passenger’s side (the left), while loading bags into the car, then it would most easily have come off when I was turning right. I made an extra careful sweep of anywhere that I’d had to turn right.

And then I found it, about half a mile down the road.

To be honest, it was the clack-clack! sound of another car driving over the key-card that alerted me to its location. But praise the Lord! there it was. And when I returned home I was even more delighted to discover that it even worked!

It was lost, but now it’s found. All that was left to do was to kill the fatted calf and celebrate. After I’d unpacked the formula and nappies, of course.