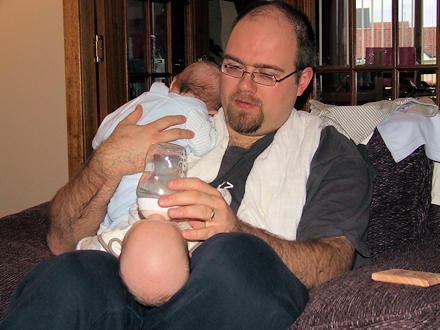 Me, feeding Reuben on Christmas Day while holding Joshua.

Wow! Can it really be one month since I last posted anything on this blog?! It’s not that there’s been nothing to blog about, it’s just that … <whispers>twins are rather time consuming</whispers>. Woah! There’s an understatement if ever I read one.

If you want more regular updates then check out my Twitter feed; if even has an RSS feed (if that means anything to you — if not, check out the BBC News feeds page for an explanation).

Now, before Reuben and Joshua emerged into this world last month I received the following two comments from friends. Sophia, who has twin daughters, wrote

The first few months can be very, very hard with twins and I found that people who had had only one really couldn’t understand that.

I have some experience of twin boys… My word, you are in for a shock! I think ‘relentless’ is the word I would use… 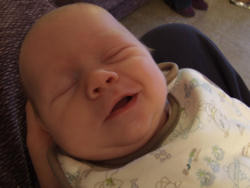 Tomorrow it will be six weeks since Reuben and Joshua (pictured right) were born and what an amazing adventure we’ve all been on.

Some days have been great, straight forward and relatively uneventful. The boys have fed well, gone down to sleep quickly and slept for hours, repeat. Other days, however, have very, very difficult. The boys have been unsettled, been out of sync with their feeding and have kept us up for hours at night. Two to three hours sleep just isn’t enough!

Someone at work asked me, “Do they wake at the same time at night?”

But you know, overall … overall it’s been amazing and continues to be so.

We have two beautiful boys (they’ll not like being called that all their lives!) and two of the most content babies I’ve ever encountered. They really have made life so much easier for these n00b parents.

I’ve had such an amazing day with them today. This morning I sent Jane to bed because she was fighting some sickness bug that I think she must have picked up from my brother on Boxing Day, while Reuben, Joshua and I worked out together how they could be fed by me on my own.

A lot of people have asked “How do you cope with two at once?” The simple answer is that we don’t know any different. 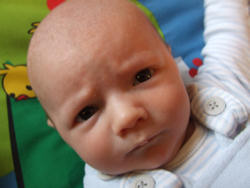 Over the last few weeks, however, I’ve been taking notes. There are one or two things that I’ve noticed could be improved with the basic design of the human baby.

The most obvious is a handle. Wouldn’t it be great if there was a handle on their back! Obviously, it would have to be recessed so that it didn’t hurt when they lay down, but when required it could be pulled out and the baby could be more easily and securely held.

In the womb a baby has an umbilical cord. This is used for a short season and then is removed. Well, their handle could be the same, and comes away after say 6 months.

Speaking of the umbilical cord, it would be really useful if a small portion of it could be retained after birth onto which a small valve is fitted. This could be used during feeding, as the current ‘burping’ or ‘winding’ techniques aren’t the most efficient.

What would be easier and quicker, sitting the baby up and rubbing and patting its back for 5-10 minutes or simply releasing a small valve on their umbilical cord stump, a bit like ‘bleeding’ a radiator? (We’d need to find another term as ‘bleeding’ the baby would attract the attention of the social services, methinks!)

But when would you know when to use it, I hear you ask. Well, that brings me to my next design improvement. How about a dashboard on the baby’s chest? I suggest the following dials:

Night feeds are tiring on parents. At the moment our mid-night feed can happen anywhere from 01:45 to 03:00. That’s a grim timeslot. You certainly won’t find me at my best should you roll up at our front door at that time.

How much easier if you could double-nappy the babies then fit them up with some kind of intravenous drip of infant formula milk! Or something. (Seriously though, don’t try this at home!)

But wouldn’t that be much easier!

Now, I realise that the whole GM topic is still a tad controversial, but has anyone considered developing GM cows to produce infant formula?

Just another wee, free thought from me for some boffin to boot around with his mates.

2 thoughts on “Possible improvements to the design of Baby 1.0”