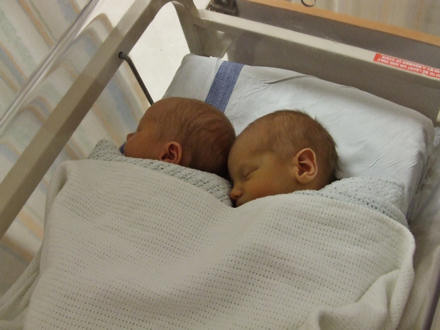 This afternoon I got banned from the maternity ward.

A couple of days ago I noticed what looked like a cluster of nasty-looking insect bites on my chest. They were red and swollen, and quite typical of my reaction to insect bites.

While many thousands of people have idyllic experiences of the isle of Iona, off the western coast of Scotland, my memories of it are distracted by the recollection of 350+ infected midge bites which made me feel like my arms, legs and torso had been repeatedly slashed with a scalpel. That’s the kind of typical experience I have with insect bites.

So, with that in mind, I didn’t think too much about them, assuming that it was perhaps some wee beastie that the cats had brought in, and gave the ‘bites’ a liberal application of Anthisan (an antihistamine cream) and went to bed.

That didn’t bring the relief that I’d hoped for, and by yesterday a few had developed into nasty looking (and feeling) blisters. Hmm … maybe it wasn’t an insect bite after all.

This morning I woke with the most incredible pain across my chest that started underneath my left breast and extended in a line beneath my left arm and onto my back, finishing beneath my left shoulder blade. It felt like someone had taken a jellyfish wrapped in nettles out of a bucket of acid and slapped me on the chest with it. It felt like a chemical burn (it still does!).

At this point I was suspecting an adverse reaction to the antibiotics that I’m currently on to treat a kidney-related infection that I developed nearly two months ago. The information leaflet that came with the Ciprofloxacin says about possible side-effects:

I telephoned NHS 24 (0845 4 24 24 24) and explained my symptoms. The NHS 24 nurse agreed that it sounded like a possible cause but said that she’d ask a doctor to telephone me. Within 10 minutes I had a call from a GP at the out-of-hours service in St Andrews.

Nothing could have prepared me for what she was about to say. “It sounds like you’ve got Shingles, she said.”

Here’s what the mighty Wikipedia has to say:

Herpes zoster (or simply zoster), commonly known as shingles, is a viral disease characterized by a painful skin rash with blisters in a limited area on one side of the body, often in a stripe.

The initial infection with varicella zoster virus (VZV) causes the acute (short-lived) illness chickenpox, and generally occurs in children and young people. Once an episode of chickenpox has resolved, the virus is not eliminated from the body but can go on to cause shinglesâ€”an illness with very different symptomsâ€”often many years after the initial infection…

Most people are infected with this virus as children, and suffer from an episode of chickenpox. The immune system eventually eliminates the virus from most locations, but it remains dormant…

… until this flippin’ week, of all weeks!

Banned from the ward

During the blistering phase (which is where I am currently) I am extremely contagious … but only if someone who hasn’t had chickenpox comes into direct contact with the rash, which is extremely unlikely given that it’s on my mid-torso.

But, still, as a precaution the hospital have had no alternative but to ban me from the maternity ward.

I cried when I realised that I wouldn’t have the opportunity to see Jane and my beautiful children for the next few days.

Meanwhile in Dundee … Jane and the babies are doing fantastically well. I did manage to see them briefly this afternoon, as I broke the bad news.

Feeding has been going better overnight, as Jane and the midwives made an executive decision to supplement feeding with bottled formula. A tremendous decision which has really helped Jane.

For the few moments that I saw them they looked contended and beautiful. It’s going to be hard not to see them for the next few days, but it’s more important than ever that I get sleep and well rested before they come home early next week — still no definite date.

4 thoughts on “I’ve been banned from the maternity ward!”