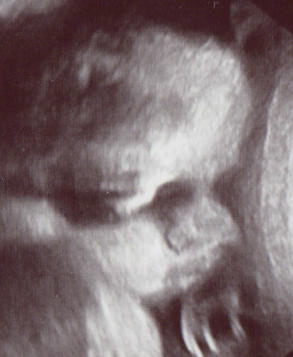 Jane’s in bed at last. Sleep hasn’t been the easiest thing for Jane during this pregnancy but last night was the worst to date with only about 30 minutes. Certainly not enough to function when you’re in the best of health let alone pregnant and carrying twins!

Today was another scan day at Ninewells Hospital in Dundee. Jane managed to drive as far as St Andrews (about 10 miles) where she met me and I drove her the rest of the way.

It feels like a very familiar road now, not least because that’s the road we take to Newport-on-Tay for church; I was there on Sunday for Harvest Festival, which was a lovely experience complete with Asperges (blessing the congregation with holy water). The theme was water too, which was fitting.

We’ve been going up to Ninewells more frequently over the last couple of months — we were there for weeks 19, 26, 28 and now 32 — for scans and visits to the twins clinic which is held in the ante-natal clinic on a Tuesday (as far as I know).

It’s been interesting to see the variety of people waiting for scans. Some (I assume) carrying singletons, others with twins (or perhaps more); I only know that because we see them later waiting at the twins clinic. Today we followed an obviously middle-class, professional couple and an Asian — I’m going to guess Muslim — woman in a long flowing dress with scarf over her head. Behind us in the queue, a girl who looked like she was college age, sitting with her friend, and beside her a young black woman.

When we came out from the scan — which lasted longer than usual because … well, we couldn’t really work out which baby was which (I’ll come back to that) — there were lots more people in the waiting room. It turned out to be, as far as I could tell, two groups.

First there was a young girl (mid- to late-teens, I would guess) sitting with her mother and boyfriend. The boyfriend looked bored, perhaps embarrassed? He sat staring into space. The females were totally blinged up! Imagine that Jimmy Saville and Mr T are related, and they have a couple of cousins in Scotland. That was them.

The other group comprised a young woman (maybe 18 or 19) with her boyfriend and an older man, whom I presumed was the father of one of them, though I’m not sure which because he didn’t seem to speak with either of them. Oddly, I seemed to recognise him, though.

A wonderful cross-section of Scottish society in that one room.

Back to the scan. Our usual doctor was on holiday so we were ushered into a room by a midwife that we’d never met before, but who seemed nice. The warmed-up lubricating jelly was smeared onto Jane’s tummy and the midwife set about with the scan.

Until now the scans appear to have been quite straight forward — says me, who’s never done an ultrasound scan in his life! Today the twins were obviously playing up. Right twin has his head down (that’s the right direction for a baby at this stage); left twin is the other way up (that’s called ‘breech’ and is the wrong way up for a baby at this stage).

To further complicate things, right twin has his spine following the shape of Jane’s bump while left twin has his spine at the back, so essentially facing the same way as Jane. They’re like Yin and Yang. They are not exactly tangled up in each other, but not far off it.

They certainly made it very difficult to take measurements, and we were completely unable to get an image of right twin’s face, though we got two amazingly good images of left twin — one of them (above) was almost 3D in its clarity.

The midwife said that she was going to use one of her life-lines and chose to “phone a friend”. She went off to get a doctor to see if she could make sense of this ultrasound festival of limbs. I think the babies must have moved when Jane sat up to wait for the doctor’s arrival because she managed to get the required measurements and confirmed that everything appeared to be as it should be.

She still couldn’t get an image of right twin’s face, though.

We were soon upstairs in another waiting room; this was the twins clinic. The chairs there are oddly arranged into three rows like a small cinema facing a huge window and a tiny 14″ TV, the picture on which was mostly static and interference. The chairs are all high-backed anyway, so unless you’re sitting at the front or on the end you can’t actually see the telly anyway!

The young woman, partner and father soon joined us. The partner’s social norms were obviously different to ours. He stood at the front and fiddled with stuff. There was an information display all about alcohol awareness week. “Aw look! He said, you can drink up to 2 units a day … you could get the baby drunk!”

There really should be a third read-out on these alcohol unit ready-reckoner wheels: male, female and pregnant. The pregnant read-out should simply say “none … none … none … none …”. It’s really not worth the risk, which is what the poster at the front said in bold letters. You can choose to say no to alcohol, your baby can’t!

Our next visit there is going to be in three weeks time (week 35) when we’ll speak further with the staff about the possibility of an elective Caesarean section. They were saying that it might be around 18 November, give or take a week or two.

That feels at once no time at all and ages away … particularly when a full night’s sleep is so hard to come by for Jane. But it is exciting.