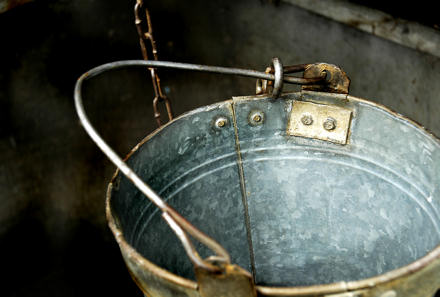 Well, that’s been an interesting day. It began with me staying up far too late (past midnight, no less) to watch Metallica perform at the Reading and Leeds Festivals on BBC 2 and ended with me leaving Jane in hospital in Dundee overnight for observation.

I woke this morning with a start. Somehow (unconsciously?) I was aware of Jane sitting on the edge of the bed. She wasn’t moving much, except for the gentle rocking of someone crying. She had a pain at the top of her bump, she’s had it for a few weeks now, but this morning the pain was more searing than ever, ‘excruciating’ you might say if you could spell it.

Once I got Jane to her feet and she started moving about, slowly the pain began to subside. Jane called the hospital’s emergency number for pregnant ladies: 0800 MY-BUMP-SAYS-OUCH! They listened, pondered and asked her to call back at 14:00 for an update, at which point they decided that Jane should be seen, just to be on the safe side.

The visitors we never saw

Now, in the meantime, my brother Eddie had decided that they’d like to visit, and estimated their arrival at 14:00. “Sure”, we said assuming that the hospital would say “Look, I’m sorry you’ve had a bit of a pain in the bump, but since it’s eased off now there’s no need for you to come for a check-up, sit up with a good book and ask your husband to cook dinner tonight.”

Of course, they didn’t. They said “Come in!”

So I called Eddie. They were on their way, but could make a detour through Dunfermline to buy a hair-dryer.

We’ll be just a couple of hours, I assured him. We’ll be back in time for tea and tiffin. I’d bought tiffin specially, even if my spell-checker wants to call it ‘griffin’.

A couple of hours later I phoned him again. They’d just pulled up outside our house. By this time Jane had had various scans and lots of medical staff poking and prodding her, and they had decided to keep Jane in for 24 hours for observation.

The good news was that Jane’s BP and pulse was good, and the babies appear to be okay, with good strong heartbeats and a propensity for kicking each other! They needed to get to the bottom of the painful bump.

Eddie had keys so let himself in and I guided him around the house while he and Rebecca packed an overnight bag for Jane … once I’d flipped between the phone and Notes mid-call on my Xda Orbit. With the bag packed and left in the hall I then phoned Jane’s Mum.

“Erm, there’s been a change of plan!” We were meant to be going there for dinner this evening, could she erm … instead pick up the overnight bag that’s standing in our hallway and drive up to Dundee to visit Jane in hospital, please?

They arrived about half an hour after we’d been shown up to the post-natal ward (as there was no room at the inn!). It was lovely to see them. Jane was in a ward bay. The two beds closest to the door were occupied, the one on the right by Jane, the one on the left by a girl who’d clearly had a baby girl. How could we tell? Balloons! Tethered next to the bed were about 1,000 helium balloons that would have made the Montgolfier brothers run away in terror.

Half an hour later Jane’s room in the ante-natal ward was ready and we were moved. And what a lovely room — there was more room there than in our £130 per night hotel room in Inverness the other night! And it had a DVD player.

Prayers of the saints

When I’d nipped out of the labour suite to call in support from Eddie and Jane’s folks I’d also sent a quick Twitter update: “Jane is being kept in overnight for obs; prayers please. xx”.

I stepped out of the hospital around 20:00, switched on my phone and was greeted by a text message and some Twitter updates (some from as far away as Florida) assuring me of their prayers. The wonders of technology and Christianity coming together in harmony.

And that’s where we’re up to. I prayed with Jane before I left the hospital, asking God to hold Jane and the babies. Neither of us were particularly worried to be honest, and Jane was actually more upset about not getting steak pie at her Mum’s for dinner tonight than about having to stay in hospital overnight! But that’s why I love her: because she’s willing to put her love of pie before her health!

And on that bombshell … thanks for the prayers, good wishes and love. Hopefully we’ll be welcoming Jane and her bumps home tomorrow afternoon.

Thanks for your prayers, folks. Jane got out of hospital on Sunday, shortly before midday.

Great to see Phreadz getting such a good write-up/name-check on the latest 12seconds newsletter:

Phreadz, an amazing site out of London, UK has integrated 12seconds into their video conversation service.  Need a conversation starter?  Import a 12second video directly into Phreadz and let the conversation begin!

Now I’m back home for the foreseeable future I should get myself back into the lands of 12seconds, Phreadz and Seesmic. 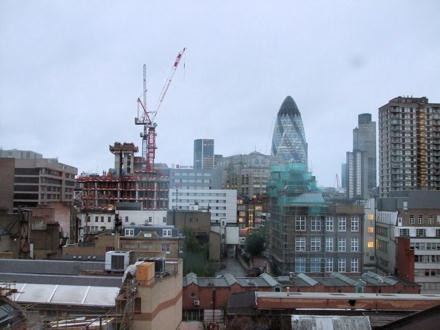 The view from my hotel window in London last week.

Last week, from Sunday to Friday, I was in London on a course: PHP Programming and MySQL for Web Development with StayAhead Training.

The course was a good introduction to PHP and MySQL, and I was the only person on the course (which you’ll know already if you follow my Twitter feed). I’ll reflect more on the course in the next couple of days once I process my thoughts.

It had been my intention to blog while I was away — I even took my webcam — but the hotel didn’t offer free WiFi, which was annoying, and as it turned out I wasn’t around long enough in the evening to make the £2.00 per hour charge worthwhile, as I was catching up with some lovely friends. Many thanks to Steve and Lisa Lawson, Richard Grocock, Mike Jeremiah, Lindsey Dear and Graham Fairbairn for their company, friendship and laughter-making. I love you all!

Today, though, I’m heading off again. This time north, to the other end of the island, to Inverness to catch up with a couple of friends … before they and we have twins in the next few months.

But I’ll leave you with a photo of my favourite street sign from that London visit: 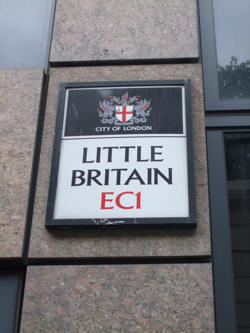 I sent a text to a couple of friends and family to tell them that I was standing on a street called “Little Britain”. My brother ‘won’ as he was the first to reply with the simple text: “Yeah, I know!” Good man!

Another new Metallica song — their first single — from their forthcoming album Death Magnetic: The Day That Never Comes.

To me it sounds like a combination of songs from Ride the Lightning, Master of Puppets, … And Justice For All, and Load/ReLoad.

Nice to see that Tesco are changing their signs; see Tesco checks out wording change on the BBC News website.