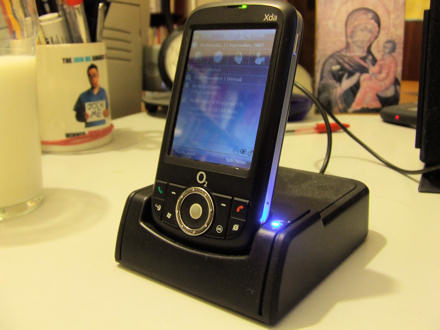 I didn’t know that until today. Until I started reading folks’ posts (called tweets) on my Twitter stream, and watching videos on Qik.

It would appear that the Worldwide Apple Cult™ managed to keep that news well and truly hidden from me. Well done!

Our man in Milton Keynes

Documentally … well, documented the day fabulously well. From getting up to arriving at the Apple store in Milton Keynes, standing in line, being served, going to the Apple store loo (!), and at one point even had one of the Apple assistants holding the camera while he unwrapped the Apple iPhone packaging — the man’s a genius!

Okay, I’ll qualify that last sentence. He’s not a genius simply for unwrapping a box. That could have been done by a simpleton.

No, there was an inclusiveness in that Apple adventure today in his Qik videos, that reflected something of the excitement and camera-derie (sic) of the day.

I watched a couple of other videos on Qik today, of folks standing in other queues, outside other Apple stores, in other towns and … well, they were probably about as embarrassing to watch as they were to make: no-one wanted to speak with the poor fella with the camera.

This is my favourite Qik post — cutting to the chase — this is the moment that the boxed Apple iPhone 3G became Christian’s. I love the cheer! The Apple Cult™ as one.

So, what’s all the fuss about? The new Apple iPhone 3G has:

My Microsoft Windows 6 powered O2 Xda Orbit mobile phone has had three of those facilities for … well, since I bought it in April 2007, and I don’t want the fourth: Push email. I’m happy to synchronize it with Microsoft Outlook 2003.

Meanwhile, back in St Andrews …

My colleague Kevin came into work today with — can you guess?

That’s right, it was a new Apple iPhone 3G. Oh, sorry, did I not tell you? Apparently the new model was launched today.

He wasn’t even intending on getting one. He just happened to pass The Carphone Warehouse on Market Street and decided to join the small queue that was already forming.

A few minutes later the manager emerged from the store and said,

Good morning potential customers of St Andrews in Fife. Thank you for your patience. I can announce to you, the consuming public of this Royal and Ancient Burgh, that we have a grand total of eight new Apple iPhone 3Gs.

So if I may, I shall ask the first eight customers who have formed this orderly and polite queue outside the shop window of my shop to kindly step inside and off with the rest of you, to your daily routines.

My best wishes to you should you quest further afield in search of this technological wonder which, if you ask me, has three out of four of the built-in functions of the O2 Xda Orbit a telephone that came onto the market over one earth calendar year ago.

And that was it. Those eight lucky fellas got their hands on a shiny new Apple iPhone 3G.

I think the official and international response to that is: D’oh!

And for those of you who like to read rude words on the internet, like ‘bum’ and ‘squelch’, there is always Maddox’s review.

This was brought to my attention by a visiting consultant today. And I thought I spent too much time on the internet!

The paragraph that made me laugh the most was:

[The iPhone is] not three devices in one any more than my laptop is you morons. Using Jobs’ loose definition of what constitutes a separate device, technically my laptop can be considered 8 devices in one:

Before I go any further, a big hand to the boffins at Check Point, the company who develop ZoneAlarm for their swift action in fixing the issue caused by this recent Windows Update.

When I switched on my PC this morning I was presented with a ZoneAlarm update notification:

which had a very clear indication why this update was necessary:

A criticial ZoneAlarm Security Update is now available. This update is required to resolve a problem with the Microsoft Update KB951748, which may cause loss of internet access for ZoneAlarm users on Windows 2000 and XP.

You can also download the update manually from the ZoneAlarm website. The update is available for these products:

Once installed you will be required to reboot your PC or laptop. I’d recommend that you save your work and close down any applications while you install the update, listen to some soothing music and make yourself a nice cup of tea.

With Windows happily rebooted it’s now time to install (or re-install) Microsoft Update KB951748. If you’ve not instructed Windows Update to ignore that particular update (which I did, and more on that in a moment) then the little yellow shield will soon appear in the notification area (next to the clock) and likely either go ahead and install the update or prompt you to install, depending on your Automatic Updates settings.

For me, the update didn’t require a reboot.

His recommendation was to switch Automatic Updates from Automatic to “Notify me but don’t automatically download or install them”.

This is actually something that I do every time I reinstall Windows XP, or set-up a new pre-installed machine. I’ve been caught out too many times by Microsoft Updates screwing up either my internet connection or Microsoft Outlook.

I hope that’s useful to some folks.

I hope so because it’s just taken me an hour to write this up! Screenshots, by the way, were taken using TechSmith SnagIt 9.