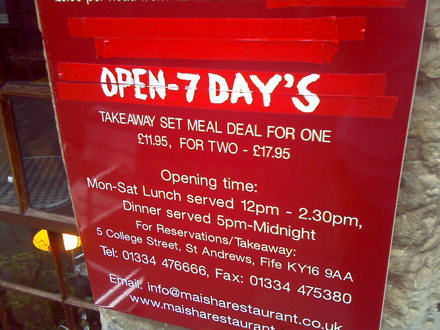 A new restaurant has opened in St Andrews on College Street. I think it does Indian and fish food. Not “fish food”, like food that you give to fish, I mean seafood. You know what I mean …

I just hope that their food is better than their grasp of punctuation, as the sign outside reads:

What’s with the apostrophe?! “Days” is plural not possessive!

And the dash before the seven? Does that mean: open minus seven days? What does that even mean? A restaurant for time-travellers?

The Apostrophe Protection Society should be informed.

Actually, thinking about it maybe the sign should just be corrected.

One of the weird and wonderful consequences of having appeared in Danny Wallace’s book Join Me in 2003 is that every now and then I would get random strangers contacting me, mostly via MSN Messenger.

Yesterday I was searching through old logs of conversations, looking for a conversation I’d had with Steve Lawson a couple of months ago when I stumbled upon this rather sweet conversation I had with a 13 year old Joinee called Sophie.

It’s the one and only conversation that I had with her on Messenger. Probably because her parents discovered that she’d been chatting with a 30-something cult member in the northern and barbaric ice kingdom of Scotland.

Sophie: Hello
Gareth: Hello
Sophie: Sorry I’ve never talked before. I was on your website and found your email. I’m a Joinee of Danny, by the way.
Gareth: 😀 What’s your name?

Sophie: Sorry about that. My MSN is a bit lethal.
Gareth: I asked “What’s your name?”, but you’d gone!
Sophie: Hehe … eek! Sorry, my name’s Sophie. 🙂
Gareth: Hello Sophie. My name is Gareth, but I guess you know that. 😀
Sophie: Yep I do 😀 You’re in Danny Wallace’s book Join Me, in case you didn’t know 🙂 and you like Metallica.
Gareth: As I happens I am, and I do. And I’m listening to Metallica right now: Metallica – Last Caress – 2006/06/03 Nurburgring, GER. That’s amazing! How do you know such things?!
Sophie: Well.. it does take quite a genius to know those facts 😀
Gareth: So, what of you? Where are you on this vast but interesting planet of ours?
Sophie: Um, I live near London. In Buckinghamshire? I am 13 … nearly 14 … um … Danny Wallace is like my hero LOL … erm.. I like skiing and football and odd things, Oh and I say KAPOW! a lot …
Gareth: Cool! There are not enough people who say “KAPOW!” in my view.
Sophie: Definitely! Phew, It’s not just me 🙂 I seem to scare people a lot by saying it but I think of it this way: I’m normal in a world of weird people.
Gareth: Are you related to Batman, by any chance? I mean, I won’t be disappointed if you are not.
Sophie: Yes! He’s my brother.
Gareth: Oh. Cool!
Sophie: Yep!!
Gareth: Cool and the cool, as my friend Rory would say.
Sophie: What a lovely phrase.

Pause for a couple of minutes

Gareth: Sorry, I nipped downstairs.
Sophie: No problem.
Gareth: I got a letter today from a company telling me to remove people’s comments on one of my blog posts or they’d take me to court.
Sophie: :S
Gareth: Which was quite exciting. So now — having removed them — I am now writing them a letter. I’d popped down to run it past Jane.
Sophie: How come? Eek! Good luck with writing them a letter 🙂 What was the problem with the comments?
Gareth: They were libellous.
Sophie: :S

And that was it. Imagine if we kept a written record of every single conversation — trivial and important — that we’d ever had. I wonder if it would make for as good reading as my conversation with Sophie that summer’s evening two years ago.

On the recommendation of @solobasssteve I’ve been checking out TweetDeck, a Twitter client, but to be honest I find it far too wide.

I think I’ll be staying with Twhirl, and just hope that Twitter stays up long enough for me to be able to use it effectively. And that they completely fix and restore their various APIs.