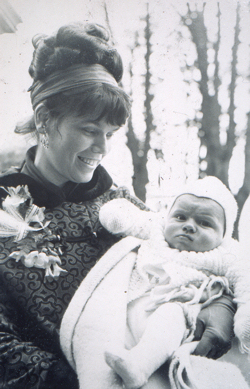 My Mum holding me in early 1972. Scanned from a positive film.

There’s a scene in the film Bruce Almighty where Bruce’s girlfriend complains that Bruce has no interest in her current relationship-oriented project of collating an album of shared photographs.

Well that very same project was what Jane and I got up to yesterday … only it was our photos we used not ones of Jim Carey and Jennifer Aniston.

Over the course of far-too-many-hours we sorted through two filled-to-overflowing filing boxes of photographs and firmly filed more than half of them away in photograph albums (Boots have a two-for-one offer on just now).

We’ve still got about 800 photos left to album-ize, but at least most of them are now sorted.

In celebration of the really terrible photos I found — which now fill two and a half mini albums of their own — I’ve started a new blog to share them with the world: My rubbish photos.