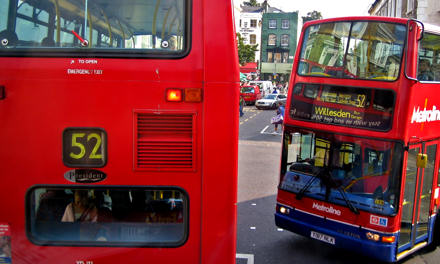 So, the observant amongst you will know that I’ve not been blogging quite as often as I used to, or would like. We’ll here’s the reason: I’ve been waiting for a bus. Of sorts.

This is the blog post that I’ve been longing to write for ages, and it even has a neat twist. But before I get ahead of myself, here’s the good news: the IVF worked!

For those of you watching in black and white and haven’t a clue what IVF is, Jane is pregnant.

Today we had the 12 weeks’ scan, which was our own personal non-disclosure deadline and so we can now share the great news with the world … albeit admittedly those citizens of the world with Web access.

I’ll probably blog later about my/our reflections on the IVF procedure, suffice to say here that the staff at Ward 35 (Assisted Conception Unit) at Ninewells Hospital were absolutely wonderful; we couldn’t have hoped for better.

We had the embryo transfer on Wednesday 19 March which was followed by the longest 17 days wait we’ve probably ever experienced.

On Saturday 5 April Jane took a pregnancy test and to our delight (and, to be honest, amazement) it showed that Jane was pregnant.

Twelve days later we had our first scan at Ninewells (still at Ward 35). This was a six weeks’ scan. I’ve no idea how these weeks are worked out. It would appear that doctors use a different kind of maths to the rest of us!

(Update: actually I do know, I was just teasing. As far as I can ascertain it’s so that the total pregnancy adds up to a nice round 40 weeks!) 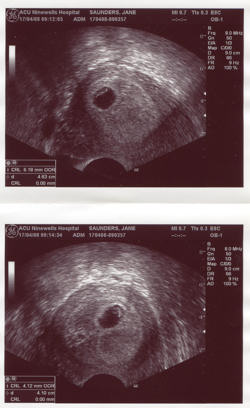 The midwife who was doing the scan told us that she’d get her bearings and then show us on the monitor what she could see.

She sat down, got her bearings and told us that she could see the monitoring machine.

“Have you been drinking?” I asked. No, not really. I’ll get back to the proper story now.

“Will we get to see it’s heartbeat?” Jane asked.

And then she showed us our baby on the monitor. It was 6mm long.

And then she showed us our other baby. It was 4mm long.

“You’re having twins!” the midwife said.

We were so delighted. We’ve been joking since about 2000 that we’d have twins. In the previous couple of weeks I’d been joking that it was quads. So the news of twins came as a delight and some relief.

The really amazing bit was that we could indeed see their heartbeats and sat watching their tiny, two-chamber hearts beating away; it looked like a really fast flicker on the monitor. Amazing, and reassuring.

A week later they had us back in for another scan just to make sure that everything was going well.

It was. Both twins had grown to 10mm. They looked a bit like seahorses at this point.

Both embryos/babies were doing well with strong heartbeats. We could relax a bit and allow Jane to enjoy the next five weeks of so-called ‘morning’ sickness that is actually all-day sickness! We’re informed on authority that the symptoms of multiple pregnancies are generally worse than for singletons.

This was our final visit to Ward 35.

And so today we were back in Ninewells, this time at the Antenatal Clinic for the twelve weeks’ scan. Which looked like this: 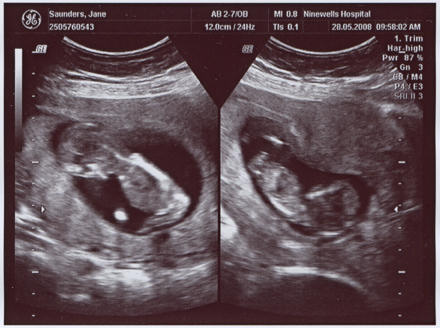 They now look a lot more like proper babies. And not like Roswell experiments, as somebody kindly pointed out!

So, meet the family! At the moment they’re called Left and Right, but I’m sure we’ll come up with better names before December.

Both looked well, with strong heartbeats, and it really was absolutely amazing to see them moving about. “Baby Right” was doing somersaults, which was really impressive but he/she was probably just showing off cos he/she was on the telly.

Typical! Just like buses: you wait ages for one (in our case, eight years) and then two come along at once.

But how cool is that, and how blessed are we! Praise God (and the lovely staff at Ninewells Ward 35).