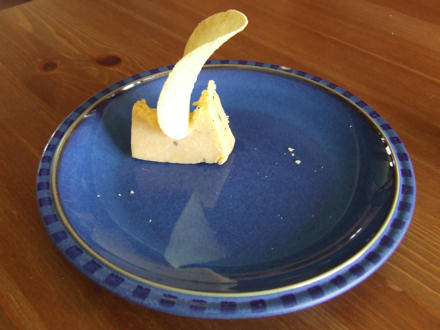 So there I was, playing with my food at lunch and I appear to have accidentally created the next Turner Prize.

For those who might not know about the Turner Prize:

The prize is awarded each year to: ‘a British artist under fifty for an outstanding exhibition or other presentation of their work in the twelve months preceding’.

My piece is entitled Gloucestershire Zeitgeist.

The piece of cheese (Gloucestershire with herbs) is fashioned (by biting into it) into the shape of a saddled horse; it represents nature.

The potato crisp (an original Pringle) represents a sail, capturing the spirit of the age, the zeitgeist. It reminds us of man’s creativity through technology. Not always a good thing.

Together they represent humanity’s mistreatment of nature: like attaching a sail to a horse, which is clearly wrong.

The blue plate represents my desire not to get cheese on the table. 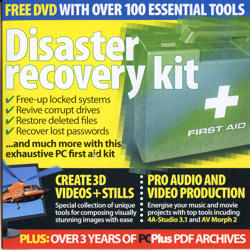 This week I’ve been sorting out a pile of CDs that have been been slowly working its way up skywards, like a compact tower of Babel.

They’ve been mostly music CDs from the covers of Metal Hammer, Rock Sound and Terrorizer magazines, but there were also a couple of guitar tuition CDs and the odd DVD from a PC magazine.

Amongst them was this DVD from PC Plus, from May 2008 (Issue 268) advertising on the cover:

… and much more with this exhaustive PC first aid kit.

Which is great, but I just know that I’m not even going to think about checking out its contents until it’s much too late.

Like the time that I manually (and foolishly) rebooted a PC in the middle of resizing a hard drive partition (see The Prodigal Hard Drive for details). I thought that partitioning software had hung … it hadn’t, it was doing its stuff, albeit with very little user-feedback.

I vowed then that I’d read up on how to repair file allocation tables (FAT) and master boot records (MBR) so that if it ever happened again I’d know what to do, rather than inviting an expert come in, remove my drive, have him scrape the final unusable remnants of data off it and charge me over a hundred quid for the privilege.

Of course I never have.

These days we seem to assume, perhaps too much, that things will just work. Apple make a big thing of this with the Mac (Get a Mac: it just works).

And we only reach for the instruction manual when things go awry. Or we swear a bit. Hit it with things. And then switch it off and switch it back on again.

For most of my adolescence and early adulthood I tried to be prepared for everything, every eventuality. I read everything: every manual that arrived with a product, DIY books, everything that struck me as useful for a just in case eventuality.

That behaviour came from having a father that was well one day and the following day collapsed miles from home in Nottingham with a brain haemorrhage. Well … I certainly didn’t expect that. No warning, no time to prepare or rehearse my responses.

And from that point on (I was 11 years old) I began my preparations. The Scouts got it right in my opinion: be prepared.

Being hit by a car

By my early-teens I had my behaviour planned out for just about every major disaster that I could imagine. By my mid-teens I’d tested one of them out: being hit by a car.

I’d reckoned that if I couldn’t get out of the path of the oncoming vehicle I should jump moments before impact. My reasoning was that it seemed to me safer to go over the car than under it. It stood to reason, up until that point I’d had more experience jumping up and over things than supporting tonnes of moving steel on my delicate Scottish frame.

The main problem, however, with living like that is that it’s exhausting. It’s like being your own paranoid health and safety department. Invariably things happen that you’ve never anticipated, and you waste so much time planning how to behave in the most unlikely of situations that will never (hopefully) happen.

But if you do ever find yourself shackled and emprisoned in an iron ore mine on the moon you can only hope that I’m in the cell next door. And the guards haven’t confiscated my notebook. And my oxyacetylene torch.

Thankfully I’m much more laid back these days.

Life happens. Things go wrong. You deal with it. And you grow in the dealing with it.

But I didn’t understand that as a kid. I saw problems as unwelcome interruptions distracting me from the real purpose of my life, like when you’re trying to get on with a piece of work and the phone keeps ringing. But they’re really just a natural part of life, and in the grand scheme of things I’ve lived such a sheltered and privileged life. Life is so much more exciting now (I’ve chilled out).

I’m not sure what I’ll do with the Disaster recovery kit DVD. I’ll probably file it away with my other PC cover discs. And bin it in a year’s time when I’m clearing stuff out.

I’ll probably promise to learn how to repair a master boot record then too. But I probably won’t. I’ll be too busy trying to unshackle my friend and escape from the moon.

Fabulous article from PC Plus with these 16 tips for advanced Google Searches: