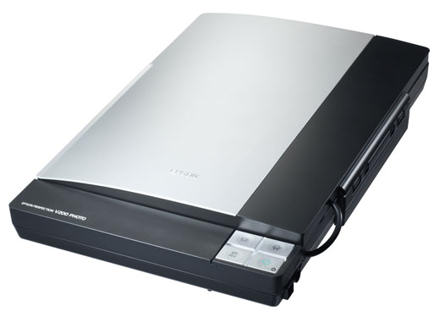 On Wednesday evening I sat down at my PC and tried to scan a document on my Epson Perfection 1670 Photo scanner.

I placed the document on the scanner’s glass, closed the lid and fired up the scanning software (Epson Scan).

I tried again. Again nothing. Every time I tried the scanner appeared to work okay but presented me with the same thing: an A4 sized blank document.

Searching Google confirmed what I feared: a hardware error.

I suspect that since you can’t switch off the scanner, short of pulling out the power cable, it eventually burned itself out. Maybe it got zapped during a recent power cut and surge.

I don’t know. All I knew is that my scanner no longer worked.

This one works, it scans faster, but even better: it has an on/off button. It’s important to switch off your peripherals when you’re not using them.

How does it work? Someone suggested the following answer:

I’d expect that the inertia of the swing arm movements is causing the plinth to roll slightly so that when they get to the end of their swing it gives them an extra split second of balance (like the zenith of an object that’s been thrown in the air). The other arms (in the middle of their swing) then have time to catch up. As more of them sync up, the plinth moves more, as in a feedback system.

Microsoft CEO Steve Ballmer says Windows XP might not reach the end of its life in June if people still want it.

Microsoft’s infamous over excitable funny man, CEO Steve Ballmer, has said that Microsoft might not kill off Windows XP in June if customers still demand it. Still going strong after 6.5 years, Microsoft’s ubiquitous OS Windows XP has stood the test of time remarkably well, but the company plans to start phasing it out in June this year.

However, Ballmer suggested that this plan isn’t yet set in stone. Speaking to a news conference in Mons, Belgium, Ballmer said: ‘XP will hit an end-of-life. We have announced one.’ However, he then added that ‘If customer feedback varies, we can always wake up smarter, but right now, we have a plan for end-of-life for new XP shipments.’

Is that called a u-turn?

Hang on a minute, I’ll go and ask Gordon Brown.

In 2003 Kelis had a hit single with the song “My milkshake brings all the boys to the yard”. To be honest, I had to look up who sang it and when, I’ve just heard it on the electric radiogram once or twice.

But I got to wondering this week about how Kelis (whoever she is) came up with the lyrics.

Did she know from the start of the writing process, for example, that it was always going to be a milkshake that was most attractive to the boys, to lure them to her garden.

Milkshake? Why milkshake in particular?

Was there a point in the development of that single that the lyrics went something like:

My yoghurt cream cheese brings a boy to the yard.

Maybe to prepare for the writing of that song Kelis popped her shoes and coat on and travelled down to her local supermarket and made a list of all the diary products that she could possibly include and wrote them in her lyrics ideas notebook.

I imagine that since she’s American it’s unlikely that she walked to the shops, she probably drove to the store in her enormous gas-guzzling SUV or station wagon.

My crème fraîche brings one or two adolescents to the playground.

My curd brings all the boys to the yard.

Perhaps by this point she’d decided that it was definitely boys that she wished to attract and multiple ones at that. And that rather than her garden it was to the yard that she’d lure them. Perhaps the yard has better protection from the sun. Maybe that’s where the barbeque was.

As it turns out that might have been a bit of a waste of time, as we all know she steered away from the whole cheese end of dairy towards fruit syrup infused milk products. However, she may use those ideas in another song. Sometime in the future. Maybe.

Maybe there will be a whole album of dairy-related songs. It might just be an EP.

Maybe every day she’d put out a different diary product in her yard each day and just sit and watch. Like feeding the birds. But blokes. Waiting to see which would attract them.

If it was a warm day then it’s likely that the butter would have melted. That’s not attractive.

Cream goes off too, pretty quickly in the sun. Kelis’s lawyers maybe had a thing to say about their health and safety concerns on this matter.

Perhaps she got lucky. Perhaps the milkshake was made with UHT milk. That stuff keeps for … like ages.

But luck or no, it helped her write a truly classic and deeply meaningful song, that I think has probably touched the lives of millions. 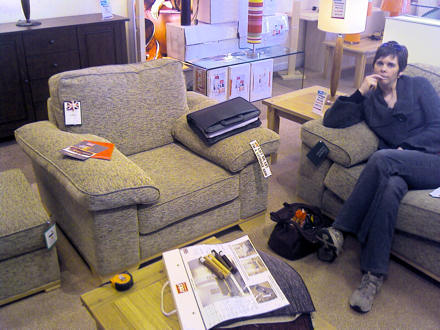 We’re not getting the dull beige one, but the more exciting and decidedly-more-Jane Yard Blueberry. You can see the colour on the table in the foreground — it’s the purple-looking colour in the samples book.

The feet will be in mahogany.

Above is Jane on the sofa, with our new chair on the left. 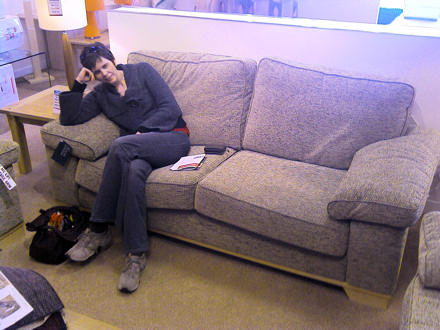 And here’s Jane on the sofa. It’s REALLY comfortable.