For Christmas the lovely Jane™ bought me the Pure Evoke-1XT Marshall DAB radio. How cool is she!

As many of you will know I also own a pink (Jane picked the colour) Pure One DAB radio. So I thought it would be quite fun to write up a comparison of the two. 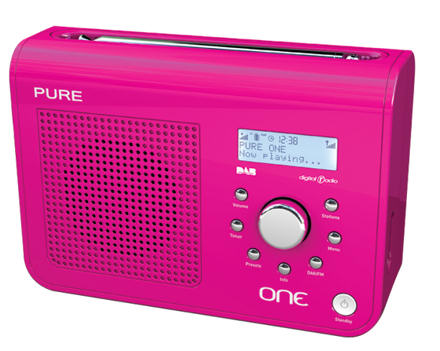 I’ve had this radio for over a year now, and I wouldn’t want to be without it. It’s simplicity itself to use.

I’m actually glad we got the pink version as it looks more cool than the white, black or talkSport versions. More than half of the front is dedicated to the 3″ speaker, with the other ‘half’ hosting a 3-row LCD display and a large control knob surrounded by seven small buttons. The standby button switches the unit on and off.

The rear of the One gives access to battery compartment which accepts 6 x C batteries or the optional (and expensive) ChargePAK rechargable battery. There is also a mains power socket on the rear.

The right-hand side of the radio houses two ports: USB (for firmware updates) and a stereo 3.5mm headphone socket.

It has a lovely rounded feel and is really easy to carry about the house, particularly if you’re using the ChargePAK or batteries.

I mostly listen to BBC Radio 4 and Planet Rock on my DAB radio, and both sound great.

The 3″ speaker gives a good full sound that doesn’t distort even at full volume. I don’t know how loud it gets (in dB) but it’s certainly loud enough.

My only real criticism is that the volume has only 16 indexed positions, and when listening to the radio in bed at night 3 can sound too loud and 2 too quiet. A more fluid un-indexed volume control would have been better.

The One has the following features:

The sleep timer is good, but an alarm feature would be equally as useful. Perhaps in a future update?

All in all this is a great portable radio, with an impressive sound that you can take anywhere. The FM option is great for areas where there is no DAB coverage, or for use with your iPod’s iTrip FM transmitter. With the ChargePAK you can install it and forget about it – it charges automatically when you plug the radio into the mains. The ChargePAK gives about 20 hours of use.

One annoying thing, that I’d love Pure to update in a firmware upgrade, is that the display backlight goes out too quickly. The options are timed, on or off, with no control over how long “timed” is. It’s about 7 seconds, which just isn’t long enough to read scrolling text. 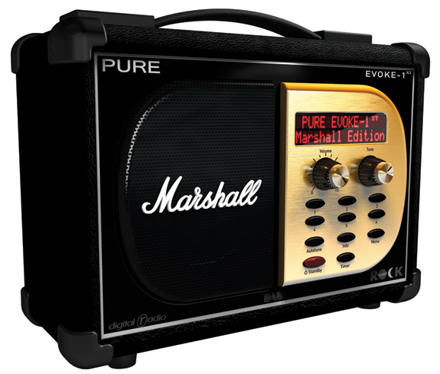 I’ve now had this radio for 12 days and I love it. Love it so much in fact that I’ve already bought the XT-1 Marshall Edition speaker extension giving it both stereo output and a richer, deeper bass experience.

There is no doubt that the Evoke-1XT Marshall is the epitome of cool, drawing its design from the classic Marshall amps: black, white and gold with the legendary Marshall signature slapped across the custom-made 3″ speaker.

The gold control panel is home to a two-row LCD display, two Marshall control knobs: Volume (it really does go up to 11) and Tune, and 11 other buttons (6 presets, Autotune, Info, Menu, Timer and the red Standby button).

When you switch on the radio for the first time it automatically searches for stations and sets Preset 1 to Planet Rock, the UK’s leading digital rock station. There is a Planet Rock logo in the bottom right-hand corner of the radio.

It’s a Marshall – it sounds great! And with the XT-1 auxiliary speaker it sounds even better in stereo, and with a slightly punchier bass.

The volume knob goes up to 11 (“but why not just make 10 louder?!”) and even at that trouser-flapping level it still sounds pretty clear (if not pretty!).

The volume control is smooth, none of the indexed-nonsense of the One. You can set the volume exactly where you want it.

In many ways the Evoke-1XT Marshall has fewer features than the One. The power supply is mains-only, with no option to run it off batteries or a ChargePAK. It can store only 6 stations rather than 20 (but then how many stations do you actually listen to regularly?), and doesn’t support FM (so put your iTrips away folks), and the red LCD display shows less information at once than the One.

While there is no sleep timer (a serious omission in my book) there is a kitchen timer (for those metalheads getting their rock cakes out of the oven, no doubt) and a proper alarm so that you can wake up to the pounding sounds of Planet Rock in the morning.

The Evoke-1XT Marshall isn’t as versatile as the One, but then it’s not designed to be. It’s a rocker’s radio, plain and simple, and as such it does its job very, very well.

But which is better?

I love the versatility and portability of the One. It just comes along with me, no questions asked. But the Evoke 1-XT Marshall just looks and sounds so cool.

Each have features that I’d like to share with the other. But in my opinion, what would make both radios much more attractive is the ability to record from the radio to your PC via the USB port. That would be excellent.

4 thoughts on “Pure One vs Evoke-1XT Marshall”