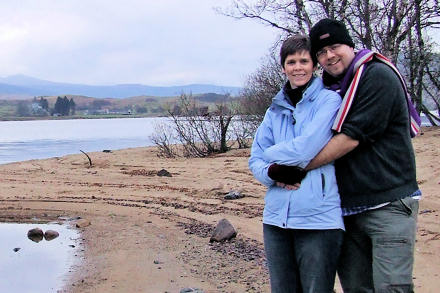 Here’s our annual Christmas newsletter for those of you who didn’t get a paper copy through the post.

Having moved into our new home in November, we were feeling quite settled by New Year, which we celebrated in style with Eddie, Rebecca and Owen. Of course, when we say “style” what we really mean is that Eddie and Gareth played Lego Star Wars on the PC in the study while Jane and Rebecca sat in the living room chatting and drinking champagne.

About a week later lardy Gareth realised his New Year’s ambition (of the last eight New Years) to get on his bike (and drink his milk) and begin to get fit again. It’s been a long, and at times literally uphill struggle, but his efforts are paying off, the fat is dropping off and so are his clothes!

Having enjoyed so much our experiences of moving house three times last year we helped Gareth’s Mum Rosalie move from her family home of 35 years to a newly-built flat about half a mile from there.

Between March and August we travelled down to Selkirk most weekends and got to work clearing out, packing up and redecorating the house ready to put it on the market. It was exhausting and emotional work, that reawakened many a memory, both joyful and sad, but looking on the bright side we did get to be on first-name terms with the man at the dump! His name was Stig.

Rosalie moved out of Kirkbank Cottage on Wednesday 22 August, and into her newly-built flat about half a mile away. Unfortunately the carpets weren’t all laid, the gas pipe had only just been installed (that morning) and when we arrived with the keys the floor was up! It was certainly an adventure!

But Mum was soon settled in. By ‘soon’ I mean after about four months. For the first few months it literally looking like a building site outside her front door, her telephone wasn’t connected for three months (thanks BT!), her shower didn’t work for just as long, and her garden needed landscaped before she could plant anything. Bit by bit she’s getting there, though, and we get down to Selkirk as often as we can to lend a hand and give her a hug.

Not to feel left out Jane’s parents, Peter and Dorothy, also moved house, from Edinburgh to Anstruther, where they’ve bought a house with plans to open a Christian retreat house.

Unfortunately their move went fairly smoothly and there isn’t really any drama to report. Their new house has a pond, and the original Anstruther village well under a man-hole cover in the drive.

There’s a palm tree in the garden too. And a fridge in the kitchen. I told you there wasn’t much drama!

In May Gareth’s hard work coding the new website for the University of St Andrews paid off and the site was launched to the public (and the rest of the University). You can visit it at www.st-andrews.ac.uk (but don’t use an old browser!) We went live slightly earlier than we’d have hoped and spent the next fortnight answering support calls from a safe position beneath our desks!

When it was safe to come out we were able to realise what an achievement it had been to move around 4,000 pages from 35 websites into one, all-singing, all-dancing, shiny new website in about 10 weeks. Seven months on and we’re still fixing things. It’s very much like moving house, initially dumping our content in different ‘rooms’ and sorting it out later.

In July we travelled down to Hereford to support our friend Jonathan Coore who was ordained deacon, stopping off en route to visit friends Kenny and Chris Fyfe in Newcastle-upon-Tyne. A quick overnight visit in Bristol, via Wales, and then it was back up the great British motorway network of the UK (via Selkirk) to sunny Anstruther. All in three days. We know how to relax!

Jane enjoyed our long, hot and dry (?!) summer weekends playing tennis at the Anstruther Tennis Club, where she was voted player of the year with most potential. Gareth, meanwhile, was still cycling the back-roads of the East Neuk of Fife trying to lose weight and bring his blood pressure down.

In July we bobbed to the top of the waiting list, and got a bit of a fright when they called us into the hospital about three or four months sooner than we had anticipated. But we needn’t have worried, because it still hasn’t begun!

Due to unforeseen complications Jane’s three months of preparatory (and painful) injections turned into four months, and then five. Which then led to an operation and the whole of December off to recover.

We expect to begin (again) in the New Year (2008)sometime. We continue to hope and pray.

After four interesting years with The Duke of Edinburgh’s Award Jane couldn’t take the extensive, all-over-Scotland travelling anymore and moved to a ‘closer’ job, starting in August . in Kirkcaldy, which is 35 miles closer to Anstruther than Edinburgh.

One of her aims is to raise the profile of the centre within Aberlour, which she managed to do very effectively on her second visit to head office in Stirling when she launched herself down the stairs, ending up in A&E! She and her project are now very well-known. Well done Jane!

We made two very enjoyable visits to Inverness during the year. (For those who don’t know, we lived in Inverness from 1999-2003 while Gareth served his curacy at St Andrew’s Cathedral.)

In August we spent a couple of nights in a lovely B&B at Alturlie, overlooking the Moray Firth (we still didn’t see any dolphins), and caught up with lots of old friends from the cathedral. One highlight was phoning up the Frasers to see if they were available for afternoon coffee and being invited to supper. Which was super. What wonderful hospitality we experienced in the Highlands. Another highlight was catching up with Des, who was the Church Officer at the cathedral during our time there, and really helped to keep Gareth sane.

We returned to Inverness in October, staying with the Howies in Beauly (what a memorable curry!), to attend our second ordination of the year, that of The Revd Canon Mark Strange who was ordained Bishop of the United Diocese of Moray, Ross and Caithness.

What a celebration! What a sermon! (See http://tinyurl.com/yww732 for the sermon script.) What an awful lot of young people in the cathedral! It was a real joy to be a part of that significant event. The best service we’ve ever attended in the cathedral.

As we were processing in, to a rousing trumpet and drums fanfare, I spotted my dear friend Jamieson Sutherland in the pews. As I passed by I leaned over and said quietly “Hello gorgeous!”. At least, it would have been quietly had the trumpet fanfare not just silenced completely.

I winked at him on the way back up the aisle at the end of the service. And not a subtle wink either. It made us both laugh. Laughter is good in church. Even at funerals, so Fr David reminded us in his sermon.

On Gareth’s birthday (11 November for future reference) we joined Gareth’s brother Eddie and his wife Rebecca in Edinburgh to see the popular beat combo Deacon Blue playing their instruments and singing for the enjoyment of the public in a live concert held at the Edinburgh Playhouse theatrical emporium at the top of Leith Walk in Scotland’s fair capital city (Edinburgh).

The gig was really for Jane and Rebecca, who as massive Deacon Blue fans. Eddie knew most of the songs because his is a walking pop music encyclopaedia. Gareth knew about five songs, and actually preferred the support act, 6 Day Riot, but don’t tell Jane.

Jane says, “It was GREAT! I loved it. Can I see them again?” She literally has the t-shirt (and CD). Gareth on the other hand reported that “it was quite simply the quietest concert that I’ve ever been to, and with the oldest audience that I’ve ever been a part of (other than congregations).”

After the excitement of watching Ricky Ross & Co. November was obviously a quiet month, because all we can think to report was that on 12 November, exactly one year and one day after we moved into our new house, we realised that we still didn’t have any lampshades. So here’s a top tip for you all: don’t go buying all your lampshades in one go. It’s really rather expensive. “Why did we buy them all in one go?” asked Jane. “Because I was on a mission!” said Gareth.

Finally love and thanks to all our friends and family who came to stay during the year. We look forward to welcoming you here during 2008.

One thought on “News from the Potting Shed, Christmas 2007”