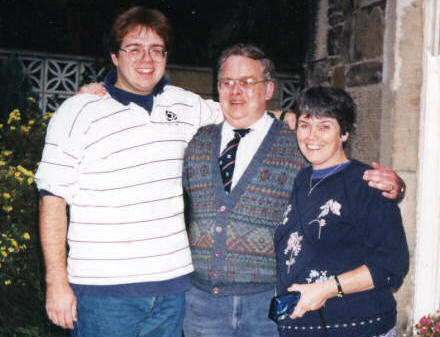 I can hardly believe that it’s been so long. Ten years.

Here’s something I wrote shortly after he died:

Where did he go? My faith says heaven – or the new earth – or something Biblical; he’s gone to be with God.

But where did he go? One moment he was with us, moving, breathing, loving and the next minute he’d gone.

His breathing had been slowing, and slowing and slowing until with a few final, shallow breaths he stopped.

As though his soul had found an opening in his frail frame and was let free; like the air in a balloon slowly being let out.

How I wanted to find it and stuff it back in; recharge his batteries and get him working again.

But, in the quiet night, with each other we were left alone. Alone with his body. His empty shell, which we loved as much as the man who used it. We were left with the refuse: a body which had failed him and which he needed no longer.

But it looked like him, there was no difference, but there was.

I took his hand. It was still warm. His watch was still ticking and I resented that. I wanted it to stop. I wanted it to show me that he was dead. It was a part of him and it should have stopped when he stopped. How dare it continue to count the hours and minutes for him when he had no more to count?

It’s been ten years now. My eyes still well up from time to time when I remember him, my Dad. I still miss him. Even though he was desperately ill, 15 years with brain damage following three sub-arachnoid brain haemorrhages in 1983, I still miss him. Because he was my Dad and I loved him.

I got this text from my sister Jenni today:

We just made the funniest snowman on Dad’s grave … with holly berry eyes and grass hair and moustache! X

If he was still alive today, he’d have liked that. He’d have laughed at that.

Except for the bit about it being his grave. Cos I imagine that if he was still alive he’d probably not want to be buried!

The Southern Reporter have printed this in memoriam announcement:

You would think that for £70+ they could at least have spelled “separate” correctly.

One thought on “Ten years on”