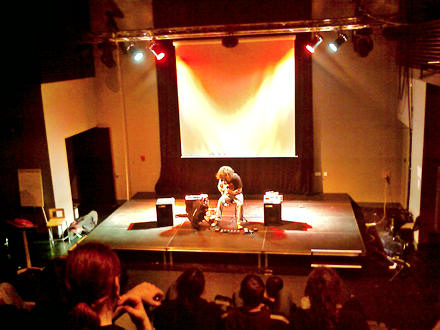 When I turned up at Perth College (Goodlyburn building) shortly after 19:00 for Steve Lawson‘s gig I was surprised to learn from the woman at reception that she had no idea there was a concert on that evening. In the concert hall directly opposite the reception desk.

Isn’t communication a great thing. It’s clear to me that they didn’t have the kind of promoter that I’ve become for the house concert tonight!

By the time the concert started the audience was comprised of about 95% music students from Perth College, which is where Steve had studied music and where he’d done a music workshop earlier that day. 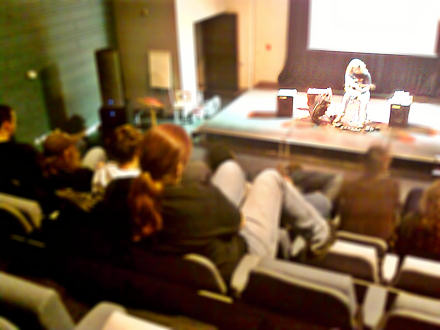 What a great opportunity! I’d love to be able to spend a year or two studying music, playing guitar and “honing my chops”. A bit like when Bill and Ted went off in the time machine for a year or two to study at the end of the second film. Except, without the time machine. Or the Hollywood budget.

At times it doesn’t sound like Steve’s playing a bass guitar, such is the versatility of the instrument … and, I suppose, the musician playing it! When we arrived I thought it was a tuba that was playing in the hall; I thought we’d turned up to the wrong venue. It wasn’t. We’d hadn’t. It was Steve weirding-out on his bass.

Steve’s music is beautiful, passionate and at times just downright weird! In a jazz-weird sense.

There are some songs that make me want to cry they are so beautiful; there is one song that makes me think of the “J R Hartley” Yellow Pages advert; and Steve’s piece in memory of Eric Roche, which he closed the gig with, is packed deep with emotion.

Tonight will be great. Although, rather disturbingly last night I realised that the stage that Steve was sitting on is roughly the size of our living room!