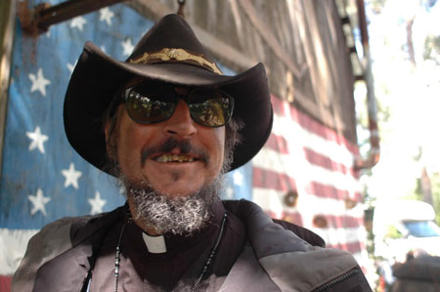 Where else would you see Primus bassist/vocalist Les Claypool dressed as a freaky-looking US preacher man (MMFSOG, perhaps?) than on the set of my cousins’ latest film Pig Hunt!

Filmed in Boonville, California — also the name of Robert Mailer Anderson’s first novel (you can buy Boonville on Amazon UK from as little as £0.01) — as the name suggests Pig Hunt is in the “dark comic horror” genre.

“PIG HUNT is old-school terror, like DELIVERANCE or STRAW DOGS except, of course,” he notes playfully, “for the ‘Abu Ghraib’ setpiece, and our 3,000-pound wild hog, and the dead emus, and the decapitation, and the gunplay.”

So, I guess we can expect more than a few litres of fake blood and some left-wing politics thrown in for good measure.

According to the Internet Movie Database (IMDB) It looks like this film is scheduled for a 2008 release. Here’s the plot summary:

When John takes his San Francisco friends to his deceased uncle’s remote ranch to hunt wild pigs, it seems like a typical guys weekend with guns – despite the presence of John’s sexy girlfriend Brooks. But as John and his crew trek deeper into the forest, they begin tracking the awful truth about his uncle’s demise and the legend of The Ripper — a murderous three-thousand-pound black boar!

Their pursuit leads them through fields of marijuana and into the muddy landscape of Big Wallow, involving high-powered weaponry, the violent and unpredictable Tibbs Brothers, massacred emus, a machete-toting Hippie Stranger, vengeful rednecks, and throat-slitting Cult Girls who grow dope by day and worship a Giant Killer Pig by night. By the time the pig hunt is done, no one is innocent – or unscathed.

Not for the faint of heart, PIG HUNT is a darkly comic horror film that combines the best of DELIVERANCE, JAWS, and DINER, but remains uniquely Nor-Cal in its tone and scope. It is cinematic punkabilly – fresh, shocking, unforgettable!

You can read about the producers (cousins Robert and Zack — and not ‘Zach’ as 7x7sf.com call him) and see some (gruesome) pictures from the film here:

Sorry to hear about Les Claypool breaking a finger, though — I wish him well in his recovery.

I love my American family, you literary (sic) never know what they’ll get up to next. If it’s not writing film scripts about football then its filming horror flicks involving wild boar. Besides, they are some of the loveliest, funniest people you could ever hope to meet.