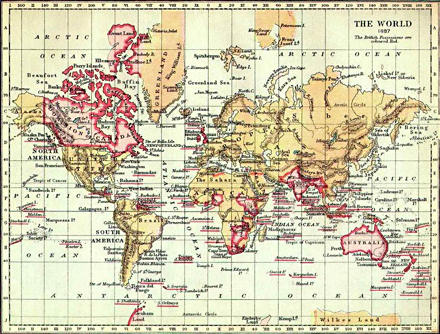 The British Empire in 1897, marked in pink, the traditional colour for Imperial British dominions on maps. (Map courtesy of Wikipedia)

I have a theory about climate change — have you noticed that people don’t call it “global warming” anymore? My theory is simply that climate change was invented by British scientists. Let me explain.

Now, when I say “invented” I don’t mean made up, as in ‘fictitious’ or ‘not-real’. After all Sir Alexander Graham Bell invented the telephone and I’ve paid enough money on phone bills over the years to know (sometimes painfully) just how real that invention was.

You see, I think it goes back to the fact that once upon a time we had an Empire. The British Empire: it was the big pink bits that covered most maps of the world.

Back in the 15th century when the hobby began and European countries started collecting colonies Britain was a dominant force.

As late as the early 1920s, the British Empire was the largest empire in the history of mankind. It made Alexander the Great’s effort around the Mediterranean look a bit half-hearted. Britain was the dominant global power, ruling over 458 million people: almost a quarter of the world’s population and a quarter of its land mass. That’s a lot of people, a lot of land and a heck of a lot of influence.

And then over the last sixty to seventy years we lost most of it, frittered it away. Largely, in the words of Eddie Izzard, by using phrases like “Oh … do you think so?”

What’s left of the British Empire, or the Commonwealth of Nations as it is now called, is now restricted mostly to countries that beat us regularly at cricket or rugby. And Canada.

A bit of a let down, really, for a once mighty nation. Britain needed something new, something to make them a world leader once more. And I think they found it.

What is it that Britons do better than anyone else in the world? I’ll tell you: no matter where in the British Isles you visit you can guarantee that people of all ages and abilities — old, young, rich, poor, friend or stranger: everyone — talks about the weather.

We’ve been talking about the weather since before the rise of the British Empire.

Raleigh: I hear that we’ve acquired a new island for our empire.

Raleigh: Yes. Off the coast of Africa, I believe.

Gilbert: Tremendous! I bet it’s warmer there than here.

Raleigh: I’ll say. The weather here’s been bitterly disappointing. And they call this summer, huh!

Just this morning, while I was at church in Newport-on-Tay, I heard at least two conversations within one hour about the weather.

We’re great at it, and thanks to British scientists we’ve now taken that greatness to the rest of the world. Now everyone is speaking about the weather, from the Arctic to Zambia, Zimbabwe to America … okay, maybe not America but everyone else is.

There ought to be a new map created showing which countries now have the weather as their number one topic of conversation. Maybe they could colour those areas of the map pink.

Doesn’t it once again make you feel proud to be British.