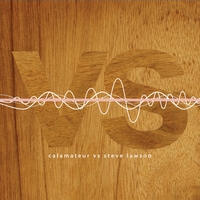 Calamateur (Andrew Howie) and Steve Lawson (erm … Steve Lawson) have collaborated on an album of nine original, beautifully eerie songs which will be officially released on Monday 1 October. The tracks are available to download now, however, on Bandcamp.

Here’s what the Autoclave Records website says about the album:

The playing is immaculate, the production gorgeous and the arrangements are achingly close to perfection. These are Calamateur songs though, which means they’re loaded with yearning, loss, ascetic sensuality and a commitment to revealing personal and universal truths. And tunes, it’s more packed with tunes that a Topic is with hazelnuts.

What more could you want from your next album purchase than yearning, loss, ascetic sensuality and both personal and universal truths? The perfect album for an enneagram type four! So many releases these days sell themselves short with a commitment to just personal truths, like the Manic Street Preachers This Is My Truth Tell Me Yours.

The album is beautiful, spacious, emotional, stark. I don’t think that I can sum it up any better than on the website:

At times deeply unsettling, and often painfully confessional (even the instrumental tracks) the overwhelming sense is of beauty in a stark place; a desolate Antarctic wilderness of songs.

My only disappointment with the album is that it promised nine new tracks. But I’d already heard a demo of track 5 “Spring Snow Storm”! (Hardly a disappointment though: I love that track.)

You can buy and download this album from Bandcamp.