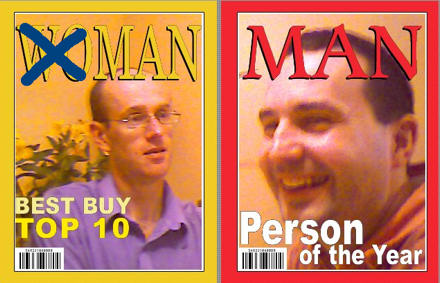 On Friday evening I popped down to sunny South Queensferry (next to the Forth Road Bridge, just outside Edinburgh) and met up with old friends Alan Vance and Ricky Carvel; friends from my first time at St Andrews (1989-1993).

Alan is a physicist who works for the Met Office in Exeter (at the other end of the island). His job involves something to do with staring at clouds and going up in aeroplanes to examine the effects of climate change (and as a result also probably contributing to it too).

I discovered that while clouds look lovely and fluffy from the ground, up close they’re not. They’re made from neither cotton wool nor legless sheep, but droplets of water and in some cases ice, which turn certain items of the Met Office equipment into aerial driftwood while flying through them.

If you’ve ever read Niall Griffiths’ novel Grits and wondered who the handsome fella on the cover is, the one looking out to sea, then wonder no more: it’s Alan Vance – Irishman, Christian, physicist, cloud-gazer, guitarist, cyclist and one of the most laid back and lovely people you could ever hope to meet.

Ricky, whose blogs I’m a fan of, works for the University of Edinburgh as a researcher for the BRE Centre for Fire Safety Engineering. He’s written a book: The Handbook of Tunnel Fire Safety; a bargain at £85 on Amazon UK .. but then it is in hardback so you can almost justify the price.

I’ve enjoyed keeping in touch with Ricky over the last few years, particularly since moving to Edinburgh from Inverness in 2003. We keep in touch mostly about Fish and Marillion music, guitars, DAB radio and other mildly geeky things like phones and stuff.

Alan was in Edinburgh all week for a conference. A few calls and texts later we arranged to meet at Ricky’s on Friday evening; he was going to be in looking after the children anyway. I said to Alan that I’d text when I was leaving Anstruther.

Just before I left I got a text from Ricky:

Hello. You still coming here tonight? If so, have you eaten yet? Alan & I are going to get a carryout ethnic later, we’ll wait for you to get here if req’d.

I phoned back and left a message on Ricky’s voicemail saying that yes we’d eaten and were about to head off, so just to go ahead without us.

About an hour later I was sitting in a queue on the north side of the Forth Road Bridge. Roadworks have resumed, as have the traffic jams. So sitting stationary I checked my phone for messages and to look up Ricky’s address. I knew that he lived around the corner from my brother, but I’d only ever been to his house by foot.

There was a text from Alan:

Ricky’s phone is not passing on messages but accepts texts. Mine works but am low on electricity.

For three guys working with the cutting edges of technology so far we’re not doing very well trying to keep in touch over something as simple as meeting up for a couple of hours. Pity help the institutions that we work for! 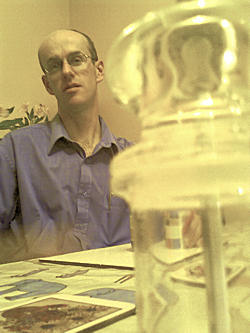 A couple of hours later Jane and pulled out of South Queensferry having had a lovely, laid back evening that had been filled with laughter, photographs of a salt cellar (see right) but mostly watching Alan eat his takeaway Chinese meal, and then eat the half of Rick’s that he had left.

One thought on “Fire and ice in South Queensferry”