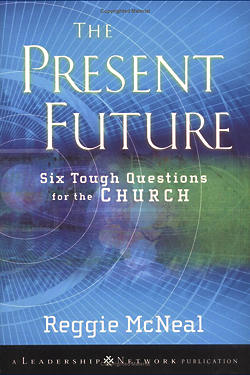 While reading around the subject of Jesus saying:

I picked up this book off my bookshelf: The Present Future: Six tough questions for the Church by Reggie McNeal.

Wow! Well there’s an author who doesn’t miss with any of his punches! It’s a book written with courage, insight, humour, honesty, a passion for Jesus Christ and a desire to see the Church move beyond its seeming current obsession with preserving the current status quo and moving towards being a powerful missionary movement: to face the future with imagination and courage.

While his focus is on North America, I’m quite sure that the picture McNeal paints in broad brushstrokes about the “current church culture in North America” can equally be said about the church here in the UK, if I understand correctly what the likes of John Drane have been writing about the situation this side of the Atlantic.

New reality #1: The collapse of the Church culture

Here’s what McNeal says on page one of chapter one:

The current church culture in North America is on life support. It is living off the work, money, and energy of previous generations from a previous world order. The plug will be pulled either when the money runs out (80 percent of money given to congregations comes from people aged fifty-five and older) or when the remaining three-fourths of a generation who are institutional loyalists die off or both.

Please don’t hear what I am not saying. The death of the church culture as we know it will not be the death of the church. The church Jesus founded is good; it is right. The church established by Jesus will survive until he returns. The imminent demise under discussion is the collapse of the unique culture in North America that has come to be called “church.” This church culture has become confused with biblical Christianity, both inside the church and out. In reality, the church culture in North America is a vestige of the original movement, an institutional expression of religion that is in part a civil religion and in part a club where religious people can hang out with other people whose politics, worldview, and lifestyle match theirs. As he hung on the cross Jesus probably never thought the impact of his sacrifice be reduced to an invitation for people to join and to support an institution.

Powerful, challenging but also exciting stuff. As fearful as I was about the Luke 12 passage a couple of days ago, I’m now going to look forward to putting this sermon together in the next couple of days.

You can read a little more on the Amazon UK website; you can currently buy the book on Amazon for as little as £6.15.