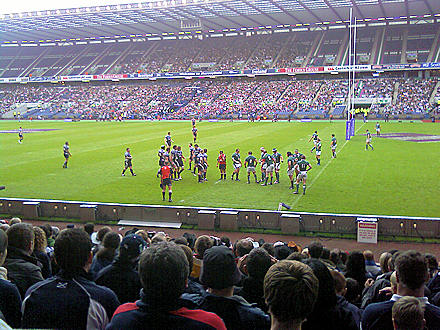 On Saturday morning Jane and I drove to Selkirk to see Mum for three hours. It’s getting mighty close to her move (a week on Wednesday) so we popped down to help out with a few things and pick up the rocking horse, to take it back to its new ‘paddock’: guest bedroom #2.

Then it was back up the A7 to see Scotland take on Ireland at Murrayfield in the first Bank of Scotland Corporate August Test.

What an exciting game. Well, at least for me: not only did Scotland win (31-21) but this was my first proper rugby international at Murrayfield. I felt quite emotional to be honest, I had to fight back the tears. I fought them back quite easily by shouting with all my might at the action on the pitch. “TAAAACCCKKKLLLLLEEE HHHIIIIIIIIMMMMM!!!!!”

Not that they could hear me.

The man sitting next to me could. We got chatting. He had a very impressive digital camera, with an enormously long lens. Turns out that he’s a photographer. He gave me his business card: Picture Me Photography a black background card with a naked woman’s breast on it. He apologized that he only had his ‘racey’ cards left.

I looked quickly at the card. As well as a naked woman’s breast, it also had his name, and what I can only assume is his title: it says he’s a Lord. Which presumably means that he’s the son of a Duke, Marquess, Earl, Viscount, or Baron.

As he went back to taking photographs, I turned to Jane holding his card.

“Have you pulled?” she asked.

“How do you do it? You always end up chatting to people and getting their life stories!”

I love meeting random strangers, and hearing about their lives. In the words of Danny Wallace: “say ‘yes’ more!”, you never know where it’ll take you or who you’ll meet.