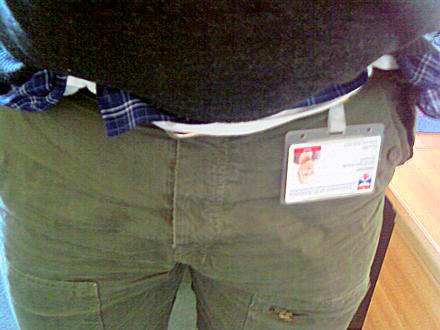 I’ve just realised that I’ve been walking around all morning with my University ID badge hanging upside down from my belt.

I do hope that it’s not a sign of distress, like flying the Union Flag upside down is.

(Perhaps more distressing is how badly I tucked in my shirt for the photo.)

Spotted in my Comics.com newsletter:

It’s awfully good too. I think I’ll be reading that every day alongside Dilbert.

One thing that has just occurred to me, however, while trying to decide what alt attribute text to include for the cartoon above is that users who rely on alt attribute text (such as those who use screen-reader software or braille displays) completely miss out on the humour in these cartoons.

The alt text for today’s Dilbert cartoon, for example, says “Today’s Comic”. I even tried tapping ‘888’ but didn’t get any cartoon subtitles.

It looks like we’ve a long way to go before the Web is completely accessible.