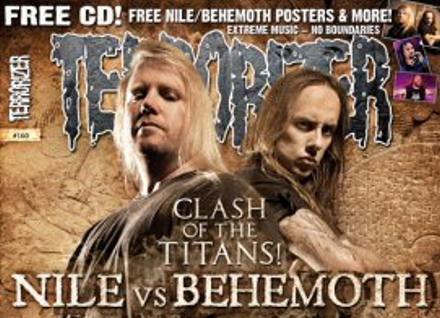 Cover of this month’s Terrorizer magazine, as shot by the talented Steve Brown

I remember growing up in the Scottish Borders in the 1980s how excited I was to get the next issue of Kerrang! magazine, or Raw! or Metal Hammer. I’d quickly turn to the album reviews and find out whether any of my favourite bands had any new albums out.

Occasionally there would be a flexible 7″ single sellotaped to the cover — I still have a few of those — what absolute bliss! Because even if the music was rubbish, it was still new music and it would help me to gauge the accuracy of what the magazine reviewers were writing and what I was listening to.

It was a frustrating exercise to read some glowing review, travel to Hawick (on the bus) to our local purveyor of quality metal (Spence’s music shop), spend my eagerly saved and hard-earned pocket-money on a new album (on cassette) only to get it home and discover that it was rubbish.

In some ways MP3s, cover-mounted CDs and the World Wide Web have stepped in to fill in that gap: now you can read the review, listen to the demo online, then buy the album.

For some, however, there is still the frustration of buying new albums based solely on reviews alone.

Here is a letter from Terrorizer magazine a couple of months back (as typed out again by my friend William).

I’ve edited it a little to censor the profanities — I didn’t remove them entirely as they add something quite special to the meaning and tone of the letter, as you’ll see:

Terrorizer is my only guide to what’s happening in the world concerning metal, without it, basically, I’d be f***ed. I like my dark/doom/goth/drone etc, as much as the next human time bomb and was surprised to see the new Sunno))) album on the shelves and I bought it right away based on your reviews.

Imagine my surprise/horror when I put it on and heard the absolute sp*zz-magnet that spewed forth from my speakers! I had to read the review again I was so confused, and I was gonna write in and complain, much like I’m doing now, but I said no, no Paddy, don’t be a c**t, don’t be like them other wee b*stards who write in and complain every time they don’t agree with something, so I didn’t.

So finally I’ll get to my poxy question. Based on your reviews, I WAS going to buy the new Earth album “Hex…”. Now, in plain f***ing English, is it the same b*stard riff over and over again with little variation?

I don’t care how surreal is it, how cool or dark, I don’t want to know what it feels like to ‘have a glacier slide over me’ or what it feels like to be ‘trapped under a gradually cooling lava flow’. For f***’s sake!!! IS IT A PILE OF SH*TE OR NOT?!! ‘Cos if I waste another twenty b*stard quid on another j*bbyfest like the last two, I will kill myself and everyone within a 35 yard radius.

Jeez, yez work in a music mag, it shouldn’t be too difficult. Thank Christ for the free CD!

Here is what the editor replied:

Some might say that the Earth album could have been recorded by a depressed, dribbling village idiot with a memory span of five seconds for all the variation in the riffs played at a rate that would make a Sufi weep with boredom.

But we reckon it’s an equilibrium-inducing, edge-of-the-world-evoking elegy that feels like having the back of your retina burnt away by the last ever sunset.

On balance, I reckon you’ll love it.

One thought on “Metal reviews vs reality”